Zardonic Finally Reveals His Much Anticipated ‘The Become Remix Album’

Following the successive releases of the LP’s debut single ‘Takeover (Zardonic & Fickle6 VIP)’, followed by ‘Children of Tomorrow (Pythius Remix)’, Zardonic is set to unleash’ The Become Remix Album’. Just like the previous tracks have been pricking the ears of tastemakers and fans alike, the drop of this LP is set to further ablaze the music scene so brace for impact.

Jam-packed with tracks like dubstep infused Revelation alongside Code Pandorum & Sadhu, dark and sinister Libertadores (Hocico Remix), Before The Dawn alongside Celldweller and remixed by Voicians which simmers the bass down to a more mellow sound. And arguably, the biggest track set to come out of the entire LP ‘Follow The Light (Merikan Remix)’, Zardonic will undoubtedly leave a lasting impression.

The Venezuelan artist, also known as Federico Ágreda Álvarez whose craft is highly respected by both the EDM and metal worlds, thanks to chart-topping tracks on Beatport, Amazon, and iTunes, and has also remixed tracks for acts ranging from Black Sun Empire to Bullet for My Valentine. It comes as no surprise that his talent has gone unnoticed, earning him three gongs from the Drum & Bass Arena Award along the way.

Renonwed for defying both the UK-centric focus of Drum & Bass and the anti-electronic cultism of Metal music, Zardonic has most certainly delivered when it comes to his musical mission to stir the sonic melting pot and cultivate a sound that resonates with music fans from all around the world.

‘The Become Remix Album’ is brought exclusively via music company eOne, (home of multi-platinum selling legends including the likes of The Game and Zakk Wylde), Zardonic continues his mission of taking over airwaves across the globe, and his far-reaching influence is only set to grow from here.

Zardonic – ‘The Become Remix Album’ is out now via Entertainment One. 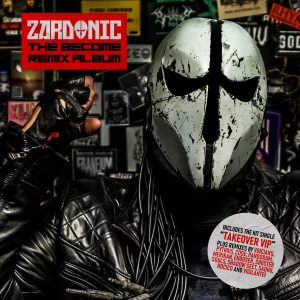