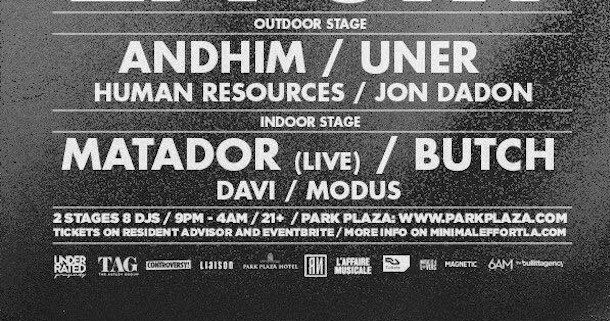 Andhim, Uner, Matador (Live) and Butch are all acts you can find at Underrated’s Minimal Effort party this weekend, on Saturday, March 21st at the Park Plaza, Los Angeles. Support comes from locals and Minimal Effort founders Human Resources, plus Dadon, Davi and Modus, all of which have been making real waves over the last year or so in LA. We thought we would make this easy for you guys and give you some tickets, so if you’re on this post to win the tickets, Contest Details Are Below:

Music is 4 Lovers is giving away 4 Tickets for Minimal Effort at The Legendary Park Plaza!

Entering the contest is EASY!

* Winner will be randomly selected from contestants and announced Friday March, 20 at 12 p.m.

The event runs from 9-4AM and features 2 stages – 1 indoor and 1 outdoor. This will be one of the more special events LA has seen in recent months, and the best part is, it’s not being thrown by some money hungry out-of-scener who just thinks it’s the cool thing to do. No. Minimal Effort, thrown by Cyril Bitar (1/2 of Human Resources), is just a reflection of passion for the music. Ironically named, these events are hardly a walk in the park in terms of production quality or talent roster. It’s a real win for the underground scene every time one of these events hits the city.

We figured while propping up this party, we might give you some insight into the makings of Minimal Effort by speaking with founder, Cyril Bitar personally. We wanted to know his take on the music scene in LA, what it means to be underground and why you should go to this event Saturday.

Cyril Bitar, Founder of Minimal Effort & Half of Human Resources:

MI4L: Who is behind minimal effort? Who is Underrated?

Cyril: Underrated is behind minimal effort. Underrated is an event production company responsible for various brands including Clinic Wednesdays, Minimal Effort & Minus Zero. I founded underrated in 2011 back in Beirut. It was me and a couple of friends,but they are not active anymore. I kept it going.

MI4L: What made you bring underrated to LA?

Cyril: I moved to LA from Beirut, and wanted to continue what I had already started the scene here was not as strong as it should be especially for a global city like LA.

MI4L: What do you think minimal effort brings to LA?

MI4L: What does underground mean to you?

Cyril: To me underground music, especially house, is a culture. I come from a clubbing background and grew up around many clubs that pushed underground music. It is an intimate feeling in my vision of parties. I love seeing a dance floor packed with people dancing on the same beat, in sync. I think that is the most rewarding feeling, people enjoying themselves together in sync for a couple of hours. Minimal Effort is a brand that aims to deliver that. Minimal Effort is trying to make underground music as accessible as possible to everyone willing to discover quality music.

MI4L: Why the name Minimal Effort? It’s obvious there’s nothing minimal about the effort.

Cyril: The name was inspired from many things. I think it takes a minimal effort for people to enjoy themselves and it also takes minimal things to make a party enjoyable: music + crowd. Good music will bring a good crowd. It’s how minimal effort was built – bring good music and the right crowd will come. “Build it and they will come.” That’s a quote from a Kevin Costner movie I think.

Mi4L: Why should someone go to the Minimal Effort party this Saturday? What is special about this event?

Cyril: We’ve put all our effort into every event we have done for the last year & the same effort will go into this one. Our lineup, this time around, is of a very high level with one outside stage, another indoor stage, a gorgeous venue and great sound.