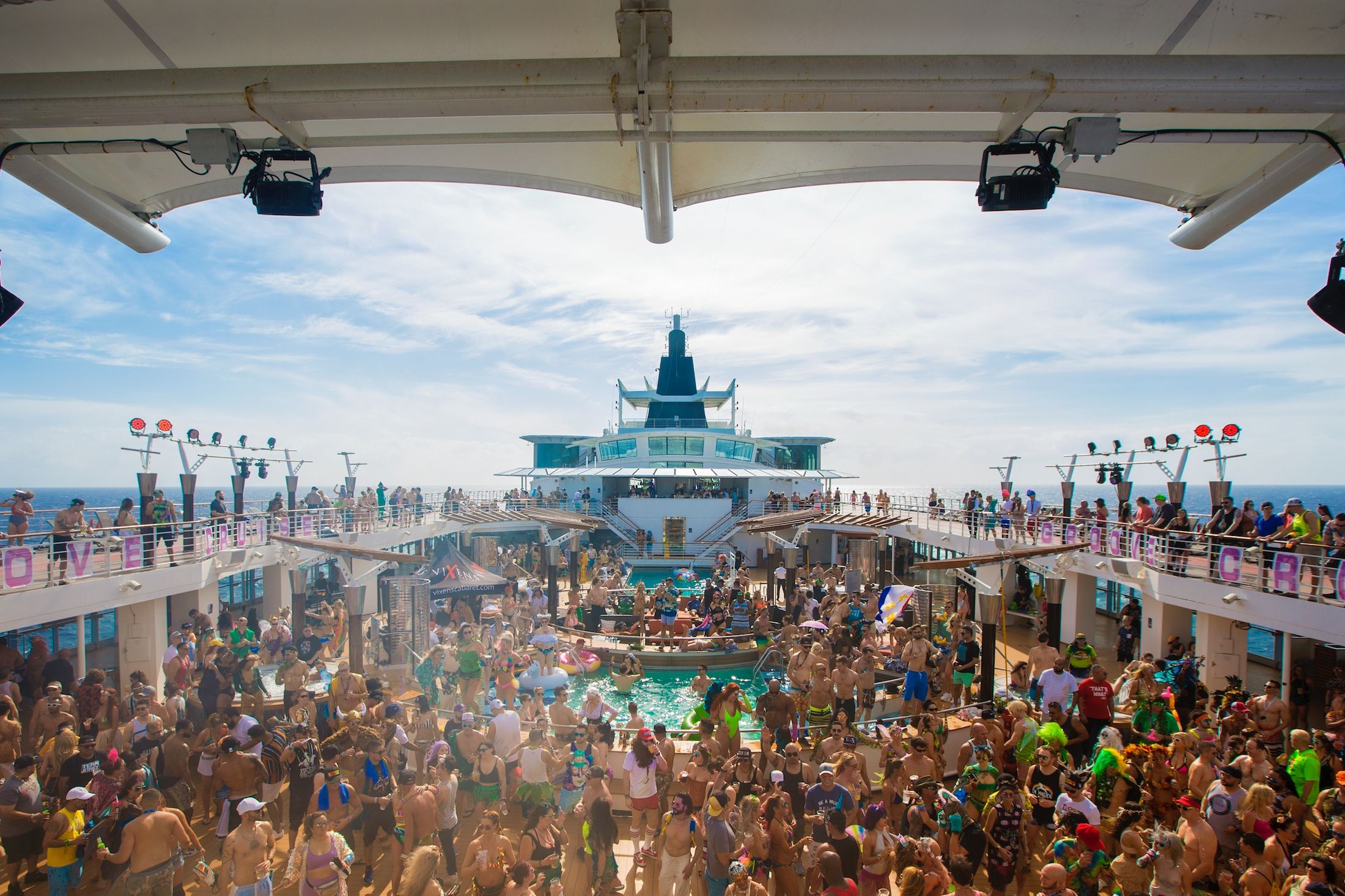 The World’s Premier Electronic Music Cruise Continues to Up the Ante for Floating Festivals!

Departing Miami on January 9 after not one but two free preparties on January 8 at the Clevelander with Cocodrills, Drums of the Sun, and more, followed by E11EVEN Miami and headliner Markus Schulz, the #GCFam boarded the ship on Thursday in their “Represent” outfits to show their pride for their countries, favorite artists, sports teams, and more as they gathered on the main pool deck for the traditional attendees group photo. As the sun set, creativity abounded for the “Team Up” theme, including a group of Care Bears lead by Groove Cruise resident DJ/producer Lizzie Curious. Fans couldn’t stop buzzing about the set from Nora En Pure on the pool deck as the sun dipped below the horizon and the Groove Cruise compass logo and lasers illuminated the custom stage design Whet Travel brings on board—one of many reasons the floating festival has been called a logistical marvel. For her first time playing on Groove Cruise, JVNA’s bass-heavy beats had Captains raving for days about her unique musical offerings. 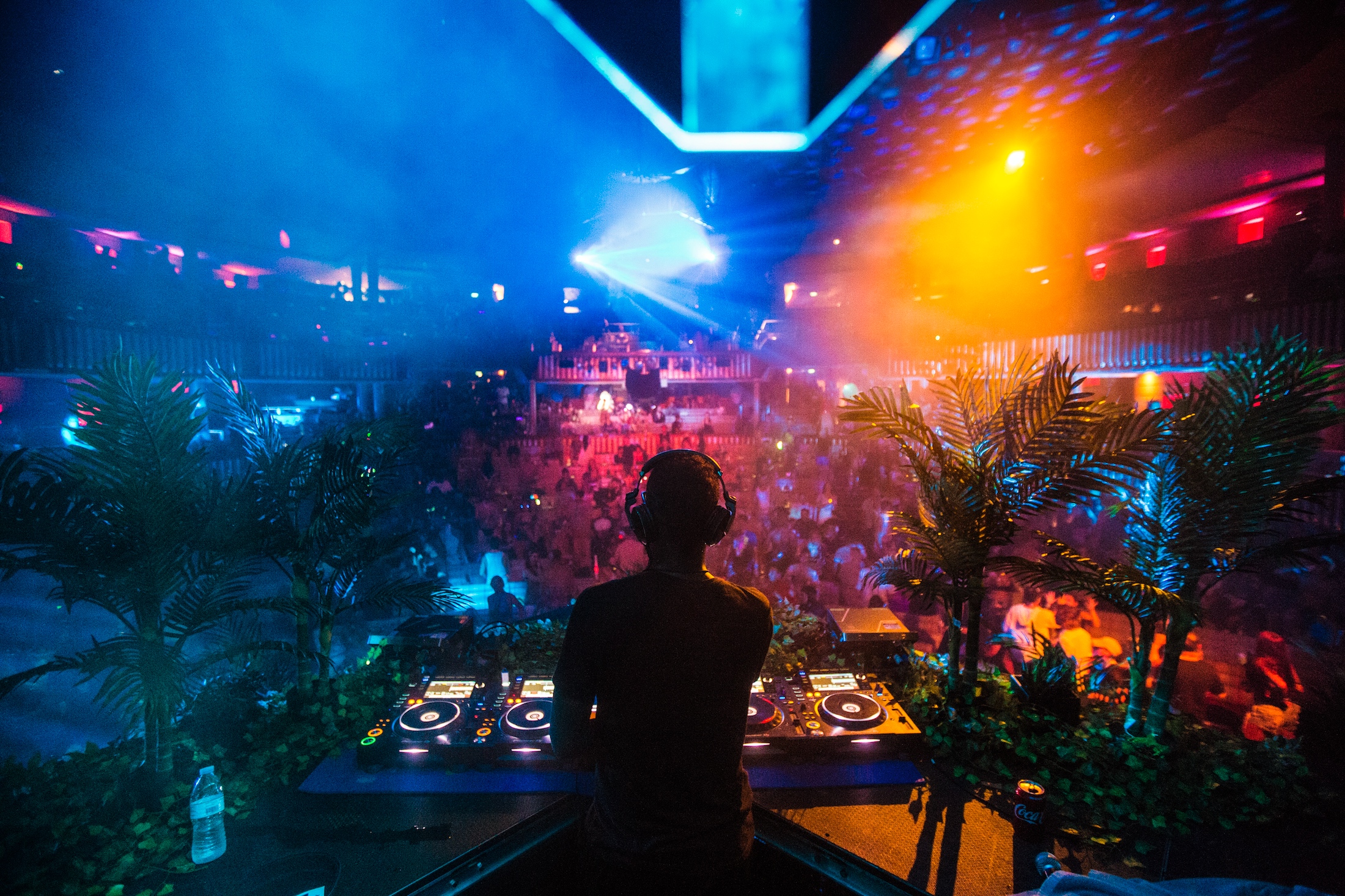 Day two’s “Enchanted Forest” theme saw sprites, elves, flora, and fauna enjoying daytime sets courtesy of Qrion, Offaiah, and Loco Dice, as well as the fan-favorite United We Groove stage, complete with a surprise rarities performance from chanteuse Emma Hewitt with DJ/producer Kristina Sky. Friday also saw Team Jetpack doing their final equipment test for their upcoming Guinness World Record attempt for the “World’s Loudest Human-Carried Soundsystem.” As Groove Cruise is more than just music, activities during the day allowed fans to donate-to-enter to the non-profit Whet Foundation for the chance to win a spot to hang with their favorite artists. Highlights included kickboxing with Yaya, Emma Hewitt’s meditation session, Team Markus Schulz vs Team Cocodrills in a basketball match, and a wine tasting with Factor B. Other onboard activities during the cruise included a dumpling-making class with Qrion, Lessons of Kshmr Live, Tequila-tasting with Roger Sanchez, artist-hosted dinners, and the return of the #GCFam favorite Crusher Camp–an ’80s-style aerobics workout featuring participants donning totally tubular neon athletic outfits, legwarmers, and radical wigs for a bonus costume theme, plus “Steam Punk” being the Friday night suggested attire.

The Celebrity Theater was transformed to rival any land festival stage with a tiered pyramid elevated DJ booth to channel the Costa Maya destination, complete with creative original content on the LED video panels. Unicorn Slayer Markus Schulz played an open-to-close set for the #TranceFamily as an intense laser show wowed the audience. For those needing time to chill from all the heart-pumping excitement, the Whet Oasis holistic experience transformed the ship’s Solarium nightly into the ultimate relaxation station with aroma therapy, deep desert house music, tea and fruits bar, yoga, meditation, plenty of comfortable lounging spots and piles of pillows, and more. 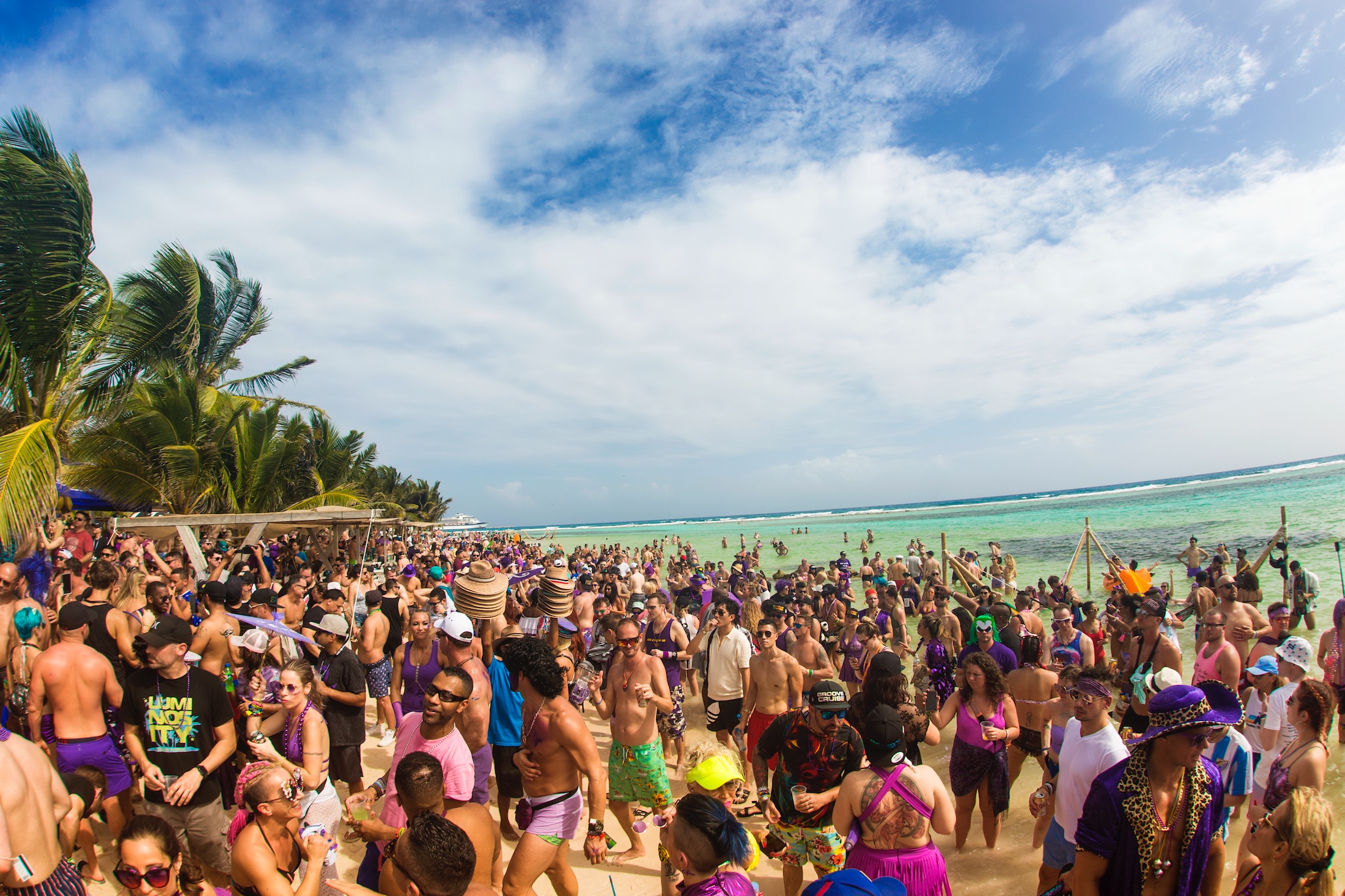 The love amongst the #GCFam was on full display as hugs abounded, plus four weddings occurred during the sailing, including Groove Cruise Founder and Chief Excitement Officer Jason Beukema officiating for one of the happy couples and Trance Jesus presiding over another ceremony. Love was in the air as multiple marriage proposals also took place throughout the cruise.

Saturday morning saw volunteers disembarking for the non-profit Whet Foundation’s annual Destination Donation excursion as a way to give back to communities in the areas Groove Cruise visits. Fans and artists including Mike Hovsepian and Lavelle Dupree ascended on the Casa de la Cultura de Mahahua to clean an abandoned construction dump site to help lay the groundwork for a new playground. The team also brought backpacks filled to the brim with school supplies donated by the #GCFam while Team Jetpack provided music on the move unlike anything the local children had ever seen. The Whet Foundation was also able to raise money to order and install a new air conditioning unit after the school’s previous one was broken in an attempted theft, plus funds to repaint the building and the aforementioned playground.

Afterwards, they joined the rest of the revelers at BlueKay for a special beach party with headliners Above & Beyond playing for the #GCFam for the first time. With a daytime theme of “Purple Rain,” costume theme interpretations ranged from honoring the legendary artist Prince as his “love symbol” adorned parisols, shirts, accessories and more, to the infamous “Chappelle Show” Prince basketball game skit attire, or just rocking the color in whatever way one wanted. A few lucky fans with the best signs were selected for the infamous “Push the Button” moment during Above & Beyond’s set and even a few brief showers couldn’t dampen the mood with the Anjunabeats legends. 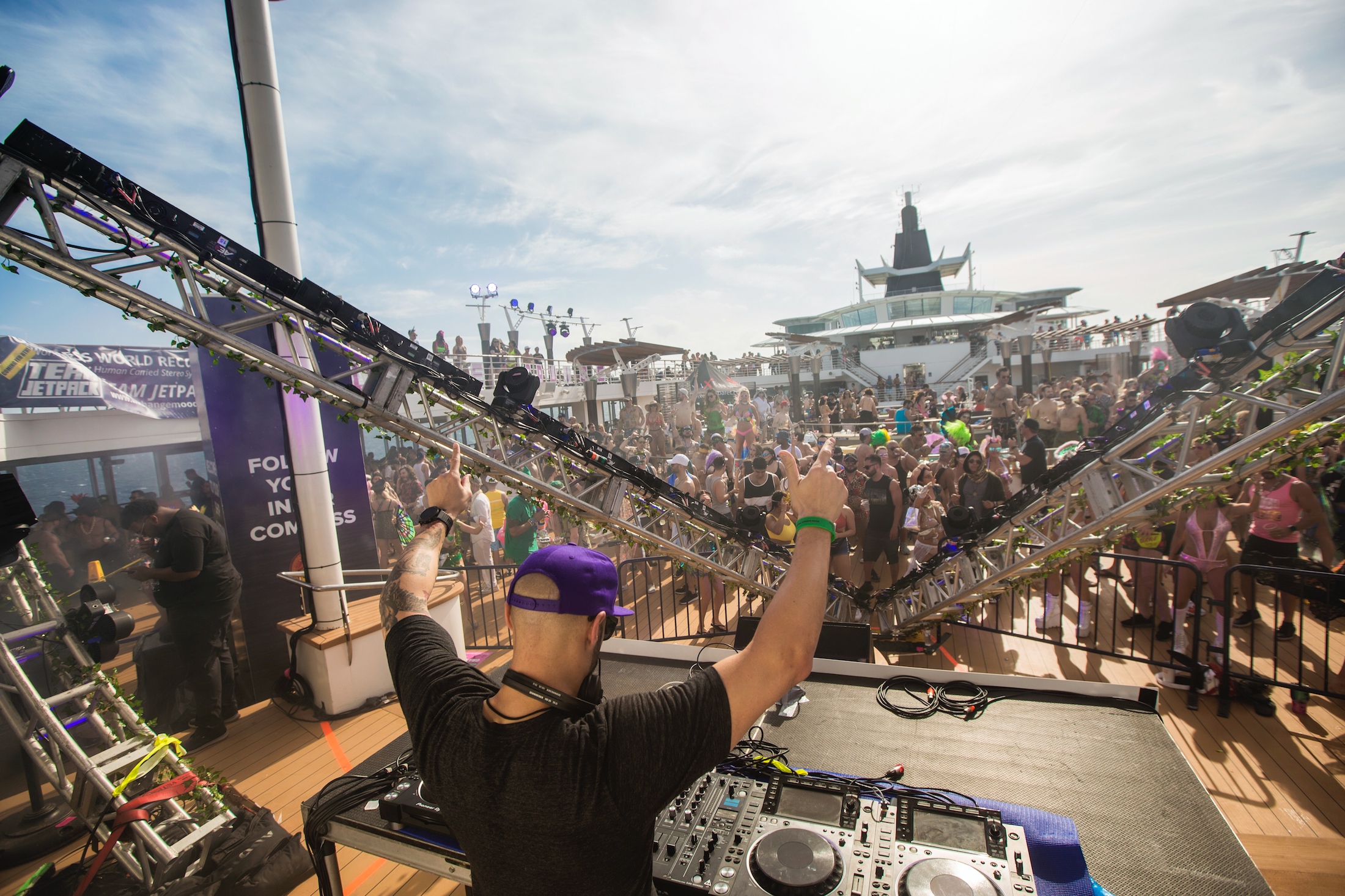 Once back on the ship, a Pajama Party theme ranged from comfortable to coquetry, including many Groove Cruise onsies—a popular merch item with the #GCFam. As a special treat, Roger Sanchez went back-to-back with Cocodrills for the sunset sail away set on the pool deck for a creative collaboration. Back in the Celebrity Theater, Groove Cruise Miami 2020 DJ Contest winner Brittany Beers–the first female to upon which the honor was bestowed–astounded the #GCFam and with her impressive skills, infectious energy, and ability to pack the room early for a set complete with original tracks and an exclusive premiere of a yet-to-be-released new tune. Beers was the perfect opener to set up the space proper for Troyak, followed by the face-melting BPMs of KSHMR. Mixing things up a bit was the hip-hop party in the Constellation lounge, complete with a special set from Kristen Knight, plus GC OG Scooter. PJ-clad peeps also got down at the Silent Disco, then joined Anthony Attalla at the Incorrect stage on the Rooftop Terrace for his marathon seven-hour sunrise set.

Making the most of their last day on the Celebrity Infinity and channeling their favorite “Spirit Animals,” Coldharbour Recordings played host to the pool deck stage, complete with label staples Daxson, Grube & Hovespian, and singer Adina Butar joining her beaux Markus Schulz for a special live performance. Scotty Boy’s Deep House Brunch also returned, then to celebrate GC resident Bryan Lubliner, aka We’re Never Going Home’s birthday, it was billed as a birthday party for everyone no matter their actual birthdate, as if anyone needed an excuse to pack as much excitement as possible into the remaining hours at sea. The rooftop terrace was rocking as Gene Farris dropped an old-school house set, then a producer set from Solarstone, and Roger Sanchez playing the final set of 2020 as the ship pulled into port and the sun began to rise. For those not quite ready to go back to the real world, Captains could take shuttles right after disembarking to the afterparty at E11EVEN with

For those feeling the FOMO, Groove Cruise Miami 2021 is now on sale and already 50% booked up and tier 1 pricing is almost sold out, so electronic music fans should reserve their staterooms now or risk missing the next adventure. The 17th annual sailing takes place January 7-11 aboard a completely reimagined Celebrity Infinity as the first charter to visit the new private pirate-themed paradise of Taino Bay. Deposits start at just $99 and payment plans are available. Prices go up February 7. All options can be viewed at GrooveCruise.com. 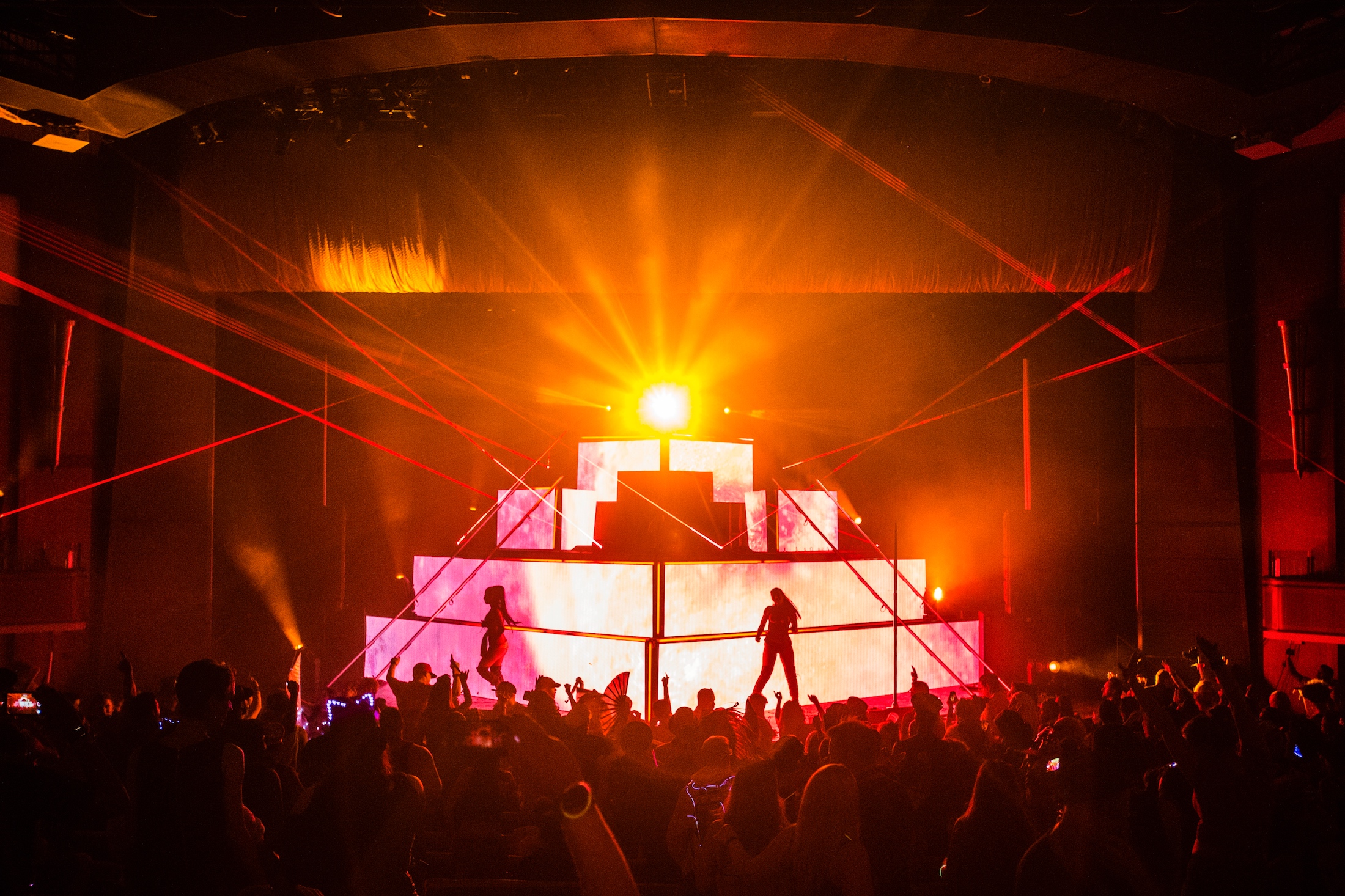 For the past 16 years, Whet Travel has curated and produced more half- and full-ship music cruises than any other independent company. Partnering with some of the cruise industry’s most recognized and trusted brands, the revolutionary company has executed more than 50 wildly successful events including Groove Cruise, Motorboat, Zen Cruise, Salsa Cruise, and Groove Island, among others. Innovators since their launch in 2004, Whet Travel was named Inc. Magazine’s #4 fastest-growing travel company in the country, has won the prestigious “Charter Partner of the Year” award from Carnival and Norwegian Cruise Lines, and has been featured in USA Today, Billboard, Forbes, and more.