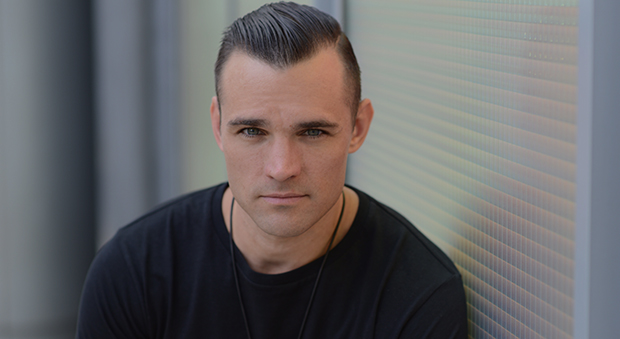 Based in frenetic New York City, Justin Marchacos is a versatile music composer whose roots originate in film. He has composed and performed original music for award-winning films on the Sundance Channel as well as in film festivals like the Tribeca International Film Festival and the San Francisco International Film Festival. His expertise of music composition extends to advertising and fashion in which he has created music for notable fashion designers including Filipina Josie Natori during NYC Fashion Week. Justin counts his musical influences as a vast array of artists all with the commonality of evoking real emotion and telling a story through their music. His crossover into dance music took off when collaboration with Gavin Stephenson and Iman Rizky, founders of ebb + flow music, started during the summer of 2014. Together, the trio has produced tracks with driving bass lines and catchy, danceable hooks under the moniker Second Format. Justin currently holds rank as a core artist in both the ebb + flow family and Cityfox, and he is managed by listed bookings.

Justin made an unforgettable debut solo performance with his live set on New Year’s Eve at The Cityfox Experience: Studio AV 2015 in New York City, which catapulted him into the heart of the dance music scene. Since then, he has moved dance floors packed with partygoers all over the world – at ebb + flow, Cityfox, and Blind Colors in New York City as well as at the BPM Festival in Mexico, the Envision Festival in Costa Rica, Cityfox in Zurich, and Katerblau in Berlin. He has shared the stage and been billed with industry legends like Lee Burridge, Tale of Us, Bedouin, M.A.N.D.Y., Âme, Mano Le Tough, Robag Wruhme, Cassy, Apollonia, Tim Green, Job Jobse, Frankey and Sandrino, Behrouz, Atish, Jay Tripwire, Einmusik, Patlac, Tara Brooks, John Charnis, Mikey Lion, Brian Cid, and Hoj, among countless others. On his production of original tracks, Justin has worked with some innovative artists such as Julia Govor and Jay Tripwire, with EP releases on NOSI Music. His Giants EP with Second Format, which was released on the Cityfox label, charted in the Top 10 on Beatport within its first week. Justin has a number of upcoming tracks in the pipeline, including collaborations with Jay Tripwire, Brian Cid, Sam Jaspersohn, Tim Green, and Midas 104…along with more releases on Cityfox.