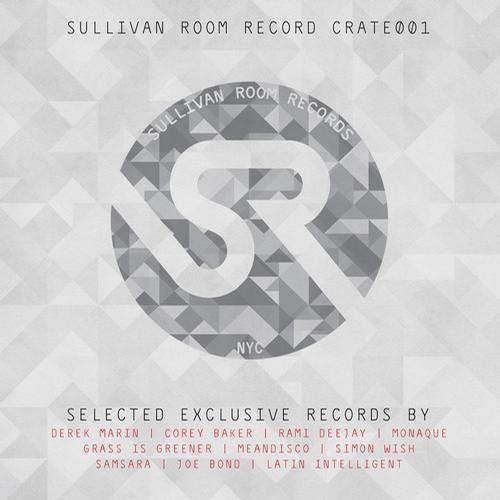 The crate clearly focuses on the artists at the forefront of New York underground community with a binding history with Sullivan Room, each with his own story. Sullivan Rooms burning desire to showcase the artists that came from the depths of the legendary venue is symbolic for the first release of the label. The crate exposes the technical skills of each artist, their influences, individuality and forward thinking. Just like the venue, and soon the label, these producers express what makes New York an electronic force and an underground powering beacon for the rest of the world. Trendy, popular, cool or not the history, the experience and valiant accuracy of their direction are there to continue the unstoppable love of the art, the dance-floor and the music.

Corey Baker – Underside Corey Baker might have been born in raised in the United States, but the New York local and a Sullivan Room veteran has left footprints all over Europe and the rest of the world. Having had a long time residency in London, he developed a signature sound as a DJ and producer. Underside lets in on Bakers evolved sound with solidified, layered intermissions of breaks and beats. Progressing with rhythmic keys the transgression of light backgrounds bring you into something illuminated and a state of complacent. Grass Is Greener – Guilty Conscience A duo made up of SR SERGE and EBAR are both veterans to the game and both very active, steadily progressing with Nu Disco, Indie Dance world one beat at a time. Their latest release Guilty Conscience steers away from their usual 80s infused chart toppers and offer a tantalizing, deep house sound, with lots of sunshine, melody and thumps in the right places. It’s a theme track to catch the feel good syndrome and pass on the summer vibes well into the winter.

Rami Deejay – Tonight ft Samsara Brothers A rising star of the local underground community, a Sullivan Room veteran and resident of many years, Rami Deejay mastered the art of opening an art that is getting lost in present time. He flavors modern house music with his experience, creating a wonderfully soulful and intelligent deep house track. Introducing his long time friends the Samsar Brothers on this track, they fill it with dilatory, sexy sounds to resonate with your body and mind. Its made for one to close the eyes and feel like heaven, make love to the loved ones and the dance-floor. Samsara Brothers – Become Brothers, Corey and Ryan Negrin have been a part of the Sullivan Room community for many years and are local long-time players of the local NY scene. Djing for over 10 years now, they have long ago left the notion of giving up their longevity and are dwelling deep into the world of productions. Their track expresses what has Become of their experience behind the decks. Edgy deep tones with echoing backgrounds of electronica convey a sweet melodic progression. Drops of unexplainable excitement, it is a sultry, early night transition into something deeper.

Monaque – Again The duo which makes up Monaque, is one match made in electronic heaven. Serge Que, a name that goes back to the early times of Sullivan Room has taken his clubbing baggage across the world, opening a very respected venue of his own back in Russia, booking top talent and making appearances on a number of labels. Meeting his partner, Alex Monakhov, a a DJ/Producer who has been creating his own music since the 90s, the duo is settled in comfortably in the underground community. Again backdrops a hypnotizing scenario of chiming electronica, with a captivating theme and a thoughtful arrangement. Snares and drums are there snare. It is a refreshing track for an early and late night like, which sends out segways of vibrations into the base of your feet.

Derek Marin – Moving In Place Long-time musician Derek Marin was brought into the world of techno and has helped it flourish in New York City. No stranger to the history of Sullivan Room, a US native has resided for a time in Berlin. He has worked with a number of artists from all spectrums of music and has seen tremendous support by the underground community. Moving In Place exposes Dereks artistry and easily reflects his talent as an electronic visionary. Simon Wish – Changes Italian DJ/Producer Simon Wish, now a resident of Sullivan Room PROPAGANDA! has continued to present himself as an artist to keep in tuned with. After successful releases on labels such as Sven Vaths Cocoon Recordings, Amam and Traub to name a few, Simon joins the family and delivers solid new productions. Changes echoes unconventional techno, done with an underground intention to keep away from an over saturated thumping tech house charters. This intelligently crisp track features Simons signature kick and an outlook from his time in the US underground circuit. The well recognized vocal is there to remind people about the roots and sacrifices.

Joe Bond – Desire Long time NYC resident DJ and Sullivan Room veteran Joe Bond joins the label with a sex oozing Desire. With just enough depth to its structure, teasing female vocals lure in the innocent audience to trap them into the comforting groove. This track is perfect for those seeking a sensual experience on the dance-floor.Latin Intelligent Welcome To My ArtIt would not be right if Sullivan Room didn’t feature a new artist, as it has been a bold and signature practice since the opening of its doors in 2001. A new artist on board, a promising talent gives us a taste of whats to come Inhale deeply and enjoy this subtle mixture of deep tech house textures and welcoming sounds.

Meandisco – The Day I Set You Free ft. Daniel Wilde A soldier of the New York City underground since the age of 14, the man behind the label and the right hand behind Sullivan Room for years has been a busy man in the studio this year. Calling his sound tech-disco, his latest production is covered in multi faceted electronica residue. Its light and spacious beginning, generates a both ghostly and sexy atmosphere. Once the kick drops, energized, it hits you with bassy particles of an uncategorized format from every which way and leads you towards the outro vocal end. Daniel Wilde, smoothly and distantly backed by a female vocalist Safiyah, make almost a poetic story, a journey with a beginning and an end, maybe that was the intention?