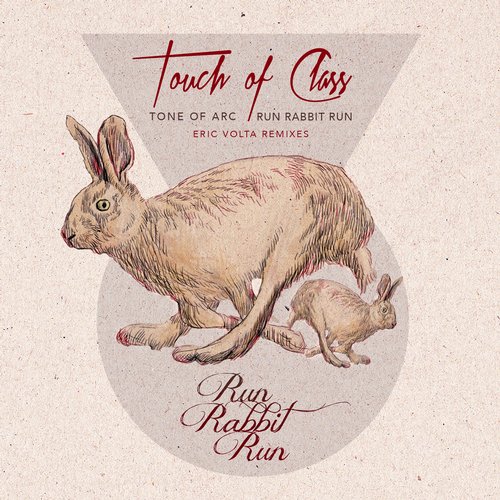 Touch Of Class is excited to begin 2015 with a its first digital only release, a follow up to their last EP from the San Franciscan duo, Tone Of Arc. The remix features the amazing reworks of the single Run Rabbit Run, a song that brings life to color with sounds full of imagination– calm, warm and pulsing bass, feathering claps, and ear-tickling, bright synths, perfectly come together making space for Derrick’s multi-layered vocals. The final result is a one man choir of spirits musically beckoning a rabbit to run for its life as a storm bellows in the distance. Eric Volta returns for a collaboration with the Touch Of Class family delivering two brilliant interpretations of Run Rabbit Run, surpassing all expectations. When Farris (aka Eric Volta) initially heard the Tone Of Arc, Retox/Detox EP he was impressed by its entirety but was particularly blown away this B-side stating, This is the greatest piece of music Tone Of Arc has ever written. He then asked, with no hesitation, to please have the parts of the track to remix. The remix was initially intended to be used as a free download to promote the EP but months later when he presented the label with not one but two bombs, it presented no other choice but to make this an official release. Eric Volta has amazed us with his original work on released on labels such as No.19, Visionquest, Dirtybird and My Favorite Robot, to name a few. Touch of Class has also had the privilege of having his remix mastery on its second release by Pattern Drama – Girar o Mundo (Eric Voltas Introverted Melancholia Remix) which he gracefully converted into a classical masterpiece. The first remix of Run Rabbit Run, (Eric Volta Down The Rabbit Hole Mix) brings a dark and cinematic interpretation to the song, giving the vocals and story a shift resolving in what we believe to be a 2015 dance floor anthem. His second interpretation focuses on the beauty of the story, giving the song a wonderful and dancey upbeat groove that will bless any sunrise or outdoor festival. Both remixes complete this digital remix package– a must have for any DJs arsenal in the New Year.