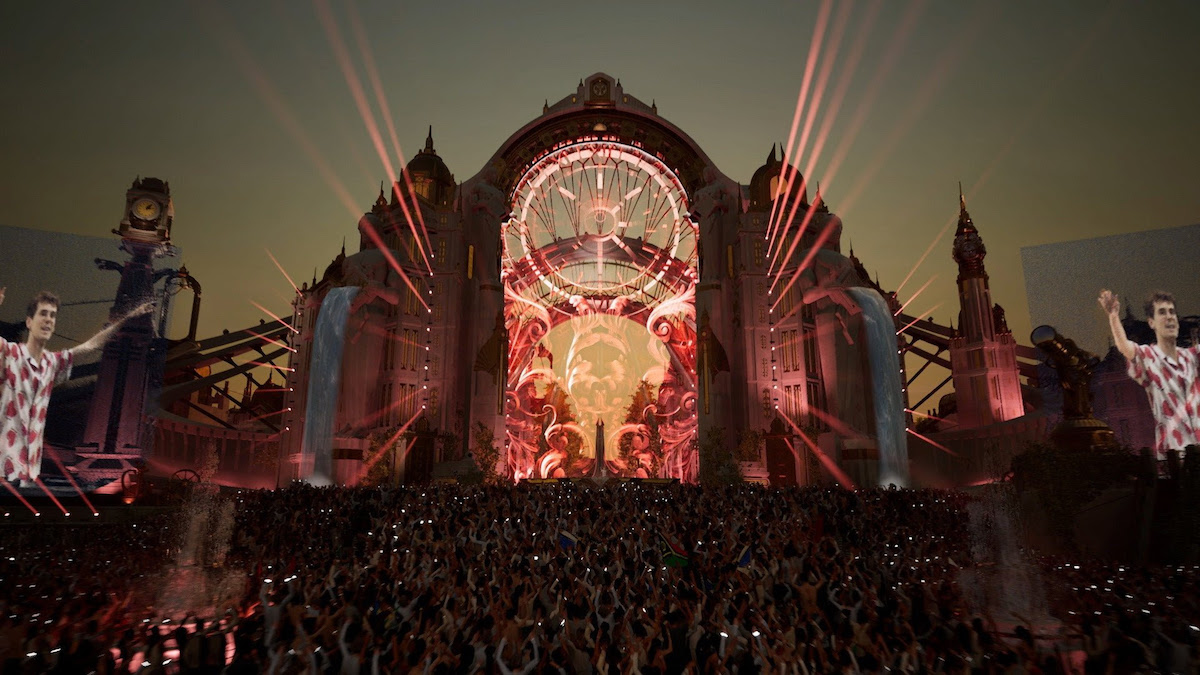 Over the past few months, Tomorrowland has been working with the latest technologies in 3D design, video production, gaming and special effects to craft a new Tomorrowland location for its two-day digital music festival, pushing the boundaries of music, 3D design, Hollywood’s latest filming techniques and the most modern game engines and hardware.

Tomorrowland Around the World won’t be a traditional live stream event with DJs in a studio or at home. Festival visitors will be treated to an immersive and unprecedented music festival experience, combining a 3D décor and artist performances with a spectacular show featuring special effects, fireworks, laser shows, a realistic crowd and sound effects.

Check out the main stage here:

More than 60 of the planet’s biggest artists have recorded their performances in 4 large green screen studios around the world, while 2 different platforms are used to assemble all the elements together. The digital universe of Tomorrowland Around the World boasts 10 times more polygons compared to a modern computer game and each stage has a 16 square kilometre surface with 32.000 trees and plants and over 280.000 virtual people who each will have their own attributes, such as flags or lights.

Tomorrowland has created this platform from scratch in collaboration with Dogstudio, a multidisciplinary creative studio with offices in Belgium, Chicago and Mexico City, and has previously worked for the likes of Microsoft, The Museum of Science and Industry of Chicago, The Kennedy Center of Washington, Dragone and many more.

“We are currently working day and night to design and bring the entire virtual island universe to life under a really aggressive timeline. We work hand in hand with Tomorrowland’s in-house 3D, creative and development teams to build a compelling, immersive, user-friendly, but also highly premium experience. We are building a web-based experience and we are all really pushing the boundaries of what can effectively be done in a web browser. Our biggest challenge – besides being an obvious enormous technical challenge – is making sure festival visitors will be able to feel they are being part of something larger than their computer and their internet connection.” – Henry Daubrez, CEO & Creative Director Dogstudio

Check out the Core stage here:

Before the cameras were set up, the studio facilities got a technical overhaul. A large grid of infrared reflectors was installed on the ceiling for tracking the exact position of each camera head, while all other parameters of the camera and lenses are transmitted live to servers that record the data and render a low-res version of the virtual world for directors. Along with the technical set-up, the lighting on the artist changes according to the location of the stage and the time of the day the broadcast goes out.

Tomorrowland has been working closely together with stYpe, which provides a cutting-edge camera tracking technology for achieving real-time augmented reality and virtual studio effects in live broadcast. The stYpe technology was used worldwide at the MTV VMAs, Eurovision Song Contest, Olympic Games, Super Bowl and many more. “Tomorrowland’s digital festival is different from the live broadcast productions we typically do, and from the typical movie productions we do, in the sense that it combines the requirements of both.” Stype Cajic, Founder & CEO of stYpe said, “In live broadcast projects, like for example the Olympic Games, there are very high standards for speed, virtual scene optimizations and reliable camera tracking. As the shots are done only once, there’s no luxury of repeating them, since it all has to be live.”

“While planning for this project, we considered a few solutions for camera tracking, and we finally decided on using the RedSpy system. It proved to be a great choice since it operated without problems on dual frame rate for days in a row, and it surpassed Tomorrowland’s accuracy requirements for 4K shooting. This meant that the camera tracking part of the challenge was solved. The second thing needed were high-resolution photo-realistic real time renders. For this purpose, we used our StypeLand Unreal plugin which we modified for getting the volumetric lights on the talent, which gave the whole set a more realistic look.”

At the end of the pipeline, there are 2 different platforms used to assemble all the elements together. The 3D stages designed by Tomorrowland are imported and layers of show elements, lights, attributes and environments are added. Depence, a platform that is typically used to visualize show elements such as lighting, lasers, visuals and other effects, is used for most indoor stages where the show elements are key to the performance.

The software was not designed to add video of real-life footage to it. With the help of the developers, it is now possible to have volumetric light on the talent in the set. These environments have gotten a more realistic look. All technical elements that make up the show are programmed and controlled in the same way by the same skilled team that does this for the other regular Tomorrowland editions. This results in a realistic image with hints to iconic stage designs of the past.

The other stages are rendered in the game engine Unreal Engine, which allows for photorealistic landscaping and scripting of certain elements. Each stage has a 16 square kilometre surface with 32,000 trees and plants. The landscapes for each stage have been custom-made to resemble elements of the festival grounds: the Core stage is situated in a forest environment, while the Mainstage has the natural amphitheatre landscape similar to the holy grounds in Boom. On the festival grounds, over 280,000 virtual people each have their own attributes, such as flags or lights. The digital universe of Tomorrowland Around the World has 10 times more polygons compared to a modern computer game, pushing the limits of the most modern game engines and hardware.

Tomorrowland has been collaborating with Epic Games and its Unreal Engine, a state-of-the-art real-time 3D creation platform and game engine that features photorealistic rendering, dynamic physics and effects and lifelike animation, widely used in many games including Fortnite, Minecraft and Mortal Kombat.

“How do we bring new experiences from great artists to remote audiences? This is the pressing question that’s being posed, and one that’s now being answered by real-time technology. Unreal Engine has quickly become the standard for beautiful virtual sets in film and television production and is now being used more in live broadcasts What the team at Tomorrowland has been able to do in a very short period of time is seriously impressive. Combining the live action performances of the artists into gorgeous, high-resolution virtual worlds has been a logistical and technological feat.” Ben Lumsden, Business Development Manager at Epic Games – Unreal Engine said.

If all that has whet your appetite, you can buy tickets priced at €12.50 (Day) and @20.00 (Weekend) exclusively from the Tomorrowland website.