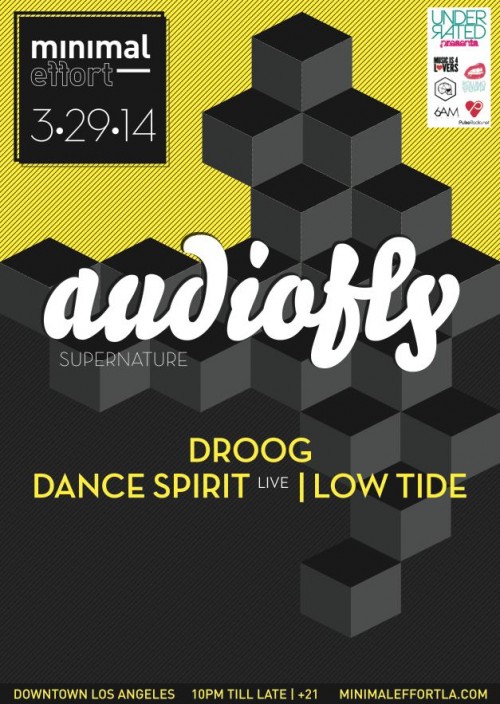 Bringing the addictive waves of electronic music, the following warehouse event series hosts a destination for underground music lovers. MINIMAL EFFORT bends and shapes to suit genres held dear to all house music connoisseurs. Held every month in an industrial private setting, Minimal Effort will be hosting talent from around the globe.  These parties have already gained instant clout bringing a dope new vibe to LA’s rapidly growing underground.  With this party we see the crew going all out and bringing in a major headliner accompanied by LA’s best local talent, who are headliners in their own right.  This is hopefully a new trend we will see in LA’s underground, where parties now feature more highly rated artists in their line up.

Although widely regarded as a member of the true A-list of dance music, both in terms of production, DJing and label management, it was a chance meeting that led to Anthony Middleton and Luca Saporito, an audio engineer/musician and working DJ respectively, becoming Audio fly back in 2002.  Middleton was, in typical boffin style, experimenting with live surround sound while Saporito was acting as in-house music selector at prestigious London store Selfridges but the pair decided to down tools and throw everything at their shared love of house music. A bold move, but one which immediately began to pay off. The Audio fly name started to crop up regularly in the London scene and beyond via a series of edits, remixes and releases for underground imprints such as Fantastic House and Deleted. This initial hype led to Peace Division and DC10 resident Clive Henry to request an EP for the now legendary Low Pressings imprint.This EP, entitled “Release Yourself” caught many an ear and coupled with the DJs growing reputation as DJs, propelled Audiofly to a new level.Fairly quickly the pair’s groovy, melodic and undulating take on house music started to create a huge fan base, both in the press (DJ Magazine featured the duo on a special cover mount CD), in clubs (Space Ibiza residency) and finally in production, with uber imprints Get Physical, Mood Music, Kick boxer and Renaissance calling on their talents.Now, the duo are pushing their sound even further with a gig diary that takes in the likes of Fabric, Warung, Amnesia and countless other world renowned clubs as well as a forthcoming album in the works but they still finding time to develop other artists via their own Supernature imprint. Only one year old, and Supernature has been a launch pad for artist such as Ali Nasser, Alex Niggeman, Bearweasel, Amelie and Boris Horel and commands the respect of labels ten times its age while their Flying Circus parties have become the highlights of both the WMC and Sonar festivals and their similarly named radio show for Proton Radio is a continued success. All of this sounds a lot, but Luca and Anthony are veritable steam trains of ideas and projects. Luca’s unrivaled enthusiasm, Anthony’s ability to think outside the box and an envious amount of talent to draw on mean there’s a lot more to come from Audiofly and their “Familia”.

Winners will be chosen early on Friday March 28th and three of your names will be put on the list +1.
REMEMBER – The more you share this post, the more likely you are to win, so share away and follow us to stay up to date!