“The timing was pretty mad to be honest. It was an email that we certainly never ever thought we’d receive!!” Paul Sawyer chats Spotify, mental health and his recent BBC Radio One residency 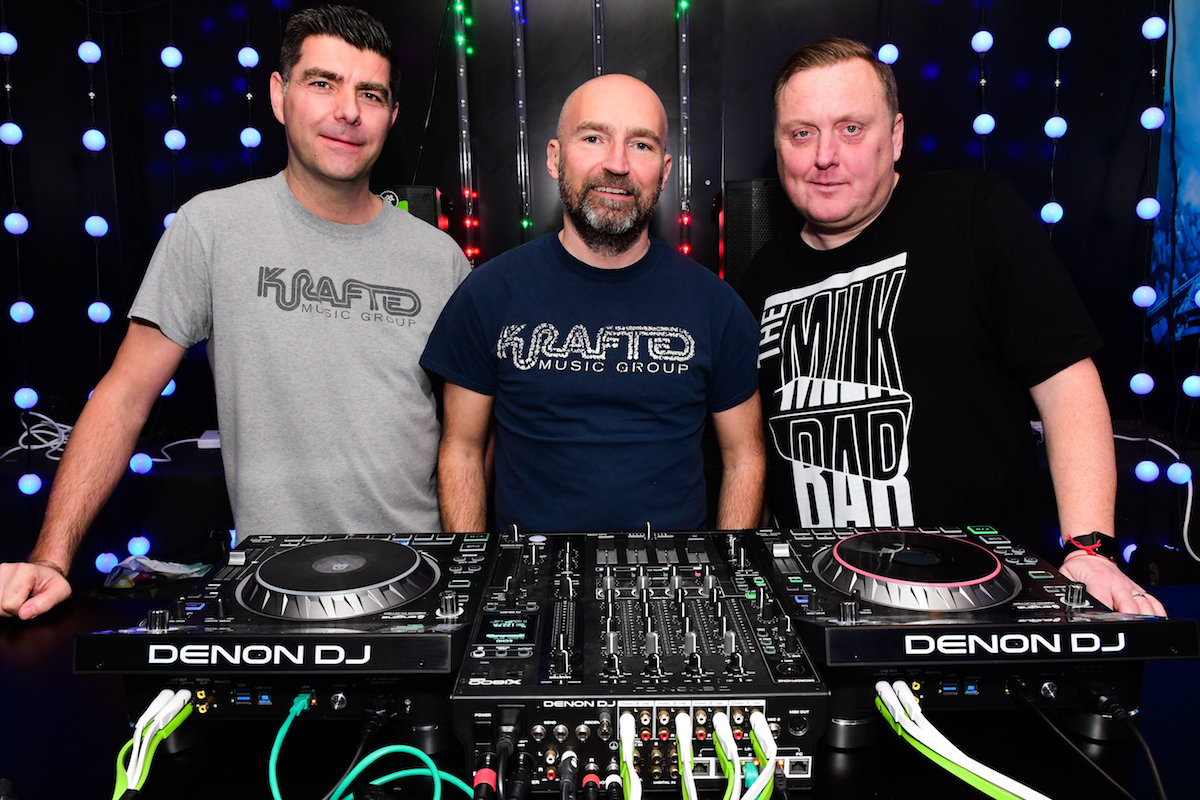 Paul Sawyer is one of those dance music guys you barely even notice. He’s not flashy or loud, he never wastes cake by shooting it from a cannon (he’d much prefer to eat it!) but he’s one of the UK’s biggest label moguls and has nearly 30 years in the trenches.

Starting out as a DJ in Southampton back in 1992, he became a resident DJ for the infamous Menage a Trois, which lead to touring the world and playing for uber brands such as Renaissance, Cream, and Bestival, and clubs from Airpusher (LA) to Ministry of Sound (London). Now an accomplished producer as well, his music can be found on Perfecto, Toolroom, Armada and of course, his own Krafted.

Following a 6-week residency for fabled UK radio station BBC Radio 1, Paul reflects on lockdown life and hanging up his headphones, a resurgence of passion and some of the many changes to the scene. Grab a drink, take a seat and get ready: This gets raw.

Hey there, all good thanks and thanks for inviting us to this interview.

Krafted has been really flying in recent times, but for those uninitiated, can you briefly explain how the group came about?

Yeah, it’s been an extremely busy year considering the music industry has had it’s brakes well and truly on with clubland shut!

Krafted has been in full swing since 2014 after Darren Braddick and I joined forces to host an event at the first Brighton Music Conference. Darren was running Endemic Digital, Unrivaled Music and Sounds of Juan, whilst I’d been releasing music on my label EJ Underground for around a year.

The event was a huge success and we thought that as we could work together for the event, why not join forces and create one brand to manage all of our labels. That’s when Krafted was born.  Soon after, Simon Sinfield joined the team. He and I had worked on a few projects together and the three of us just connected brilliantly.

After some time we realized that it was a bit confusing having this brand name and then lots of different independent labels under various names. We were being inundated with requests to release on Krafted, so we thought we’d change the names of all the labels to incorporate the one brand. We now also have a fourth member of the team, Fran Martinez from Paris who is our A&R for Krafted Underground. He is a real asset to the team and puts a lot of effort into the brand.

Events and one-offs have been important to your growth, what have been some of the highlights for you?

Yeah, we have had some amazing events over the years. Highlights have to be at Egg, London, Amsterdam Dance Event, Ministry of Sound and Gigalum in Clapham (London). We’ve had a wide range of DJs perform for us: Rob (Stereo MC’s), Alex O’Rion, Nick Muir, Lorrainne, Dave Seaman, Saytek, Quivver, Seb Fontaine and the lovely Angie Brown singing live – which was just unreal.

The atmosphere at our events have been extremely memorable, like going back to the ’90s. I think that the fact that we attract a wide age range just creates a unique atmosphere. Just can’t wait now for things to ease up and clubs to open again so we can start organizing some events!

Tell us about your residency on, arguably, the biggest radio station in the world, BBC Radio One.

Oh wow, this has been the best thing ever! The timing was pretty mad, to be honest. With clubs shut and our live streams on hold, we felt a bit lost for a while in 2020. Then we received the invite from BBC Radio 1 out of the blue asking if we’d like to host a residency for 6 months. It was an email that we certainly never ever thought we’d receive!!

Once we calmed down and started to plan the shows, we were surprised by how much time and effort we had to put into it. The pressure was seriously on. We trawled through promos and our back catalogue for what seemed like a lifetime to pick out music that really represented Krafted.

We also came up with the idea to release an album after each show including all the tracks we included in the shows. This was very time consuming sending out licensing requests etc but was a great experience. As a result, we have managed to license tracks from Universal Music, Colorize, Anjuna and include one of our all-time favorite tracks from the ’90s.

The albums are called Krafted: Re-Wind which can be heard on all platforms. There are mixed versions as well as straight compilations. The last one that reflects our last show comes out in August. For three out of the six shows, we invited some of the biggest selling artists on the label who were Phil Thompson aka Moonface, Lorrainne, and NSTHA. All three compiled an amazing mix that included lots of music from our catalogue plus more.

The residency ended June 26th with an epic show of nearly all Krafted catalogue. Talk us through the selections and the tracks that really stood out for you.

Krafted partner Simon Sinfield and I completed the residency and boy, choosing the final tracks took months!!! We played with this for ages and mixed it at least 6 times before we were happy with it. We really wanted to end on two tracks that kicked the show off when Simon mixed the first show.

He started with his track Winter Sun and then my recent collaboration with Jan Johnston called One Step Beyond. So, we created a mash-up of the two tracks to end the show. We felt that it was a great way to finish the residency. We also wanted some exclusives in there, so I produced The Wave with an Italian vocalist called Laura Welle that will be out later this year with remixes from Spada and The Forerunners on Krafted Underground.

Simon produced Atomizer that we used for the intro and again that will be out later in the year. Knowing we wanted some new tracks, we spoke to Sophie Barker who has worked with Zero 7 and many more to sing on a track for us. After sending Sophie the rough idea, she jumped straight on to it and it wasn’t long before Simon and I were back in the studio together finalizing Phoenix Rising.

There’s also a track included of mine called Sojourn that Lee Burridge has signed to his TRYBESof which is out late September 2021. We included a new track from Cosmic Crisis, who are an Italian duo and we will be releasing their debut album on Krafted Records. The track we chose from the album is called Rising My Sun which is just SO good! The vocalist reminds us of Sade, really smooth and seductive. The album comes out soon, so watch this space on that one.

The tracks we licensed from Manual Music, Emotive Sounds, and Good News all really stand out and were a perfect fit for the show. Paul Hazendonk’s remix of Illusional is just superb. Simon and I spoke about sliding in a classic track, so we discussed lots of tracks but instantly both agreed on The Sun Rising by The Beloved. It’s a track that we have always loved, so I basically contacted New State and asked to license the track. We thought it was a massive long shot, so we were over the moon when they came back and said “Yes”. Jon Marsh was happy for this to happen, so to have this on our label is amazing.

I guess the next most obvious question is: What’s next?! With clubland on continued hiatus in the UK, how do you capitalise on your forward momentum?

We’re planning more streams again with Denon DJ. We took the decision to stop when the pandemic hit. Every DJ in the World jumped on live streaming, so the market was saturated. We felt that we would wait until the lockdown eased, so we’ve already got these planned with the first one featuring Luke Brancaccio. We’re also looking at a monthly event in Bournemouth at The Vault that kicks off in September, so we’re just booking the DJs at the moment. It’s looking like the clubs are going to reopen late July, so fingers crossed that still happens.

Talking of Covid… How has the last 16 months been for you both personally and as a music industry leader?

I missed socialising that’s for sure. The one thing I love about the music scene is constantly meeting new friends and acquaintances, as well as getting together with old friends. I’d even considered giving up on production and DJing during 2020, but that changed as soon as the Radio 1 invite came in. It couldn’t have been better timing for me personally! I’m so lucky as I have a great team who are also great friends.

Simon, Darren and Fran really supported me during the time I felt really negative about my music career and suggested I had a break. I did exactly that for a few months during 2020 and it did me the world of good. From a music point of view, I felt a bit lost for a while, to be honest. I had all this music I wanted to share and it almost felt like it was a waste of time as it couldn’t be played at events. But luckily, people were listening to music more, so you could see that the streaming stats had risen.

Mental health has been a huge talking point. Do you think the music industry offers artists enough support?

I don’t think the music industry itself has anything in place to support artists in that way. There’s lots of talk about it and you see lots of posts about supporting mental health, but it’s one of those things that people have struggled with for a long time and especially during the pandemic. It’s certainly been a testing time for everyone, so I do hope help has been to hand for most.

Another issue which came to a head over the last year was how artists are paid for their art. Spotify, among others, appears to be the enemy here due to their tiny payments, but do you think a new business model is needed to make it fairer?

It’s a shame that the Majors take the main share of the revenue, but I guess money always talks. Platforms like Spotify etc needed those guys at the beginning to get the streaming sites to work, so deals were done early on to ensure the income they get from giving their releases to the sites covered the risk.

It is pretty ridiculous how little you receive from the streaming sites, it’s always talked about so much that producers invest so much money and time into making tracks, and then receive next to nothing in return. Not everyone wants to tour as a DJ to receive the return, so it’s understandable that so many people give up.

The few that do make good money out of it are very lucky and have obviously worked very hard to get to that position, so hats off to them. It’s something that really needs a shake up though. Now that streaming music is the biggest way to listen to music, you’d hope that either things will change or a new platform comes along and makes it fairer for artists and independent labels.

Good the chat to you, Simon. Speak again soon

You can catch the BBC Radio 1 Wind Down Presents Krafted shows below: