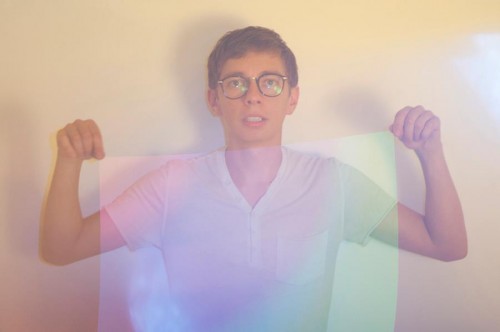 As we mark the Autumnal Equinox, that turning point in the year when the air gets cooler, the days get shorter and the leaves get crunchier, it seemed appropriate to highlight an artist who can keep you warm on those crisp days and never ending nights. Jakub Alexander makes mesmerizing music perfectly suited to hold you close as you sip your spiked cider. Currently based in Brooklyn, and better known under his alias Heathered Pearls, the Polish producer dons many hats. Besides releasing multiple albums on the inimitable imprint Ghostly International, he is also head of their A&R, music curator of Tycho’s brilliantly beautiful blog ISO50, AND founder of his own label, Moodgadget Records. Merely listing his myriad roles is exhausting! We had the pleasure of chatting with Jakub at last weekend’s Laneway festival, after his sublime set opening the Movement Stage. Mild-mannered and pocket-sized, his presence is as peaceful and pleasant as the music he produces.

Early in his career Jakub found himself sharing residencies with Matthew Dear and Ryan Elliott in Ann Arbor, Michigan, before relocating to Brooklyn to play alongside the slow disco duo Worst Friends. His most recent LP, 2012’s Loyal, is a delightfully delicate atmospheric album. The electronic melodies maintain an organic feel, lifting the listener from their living room, and leaving them mystically meandering in the meadows of their mind, the soothing synths and lullaby loops a balmy breeze of beats. Says Alexander of the fantastically fragile LP, “I wanted to find a world that was built on repetition, erosion and melody because making these songs was about recreating soothing environments.”

This month Loyal Reworks was released. It sees each track taken and twisted into new, yet equally tender tunes. When asked what it’s like to hear others’ interpretations of his own album in its entirety, Jakub told us “it’s great because most of them are my friends… so it’s a little more personal. The album’s more mellow, so I didn’t think anything too trendy would be a good choice. It was kind of just an experiment to see what everyone would do, and then Ghostly said ‘Let’s collect them and put it out.’ There was no plan for it to be released at the beginning.” He said pairing the songs with the producers was a natural process, most of them picking the song they wanted to rework themselves and, even as the options dwindled, ending up with the one they desired.

His mother a Visual Language teacher at M.I.T. and Harvard, Jakub views the relationship between music and art as absolutely imperative in order to provide a comprehensive narrative with his work. When asked to describe this crucial connection he said “It’s so important I don’t know where to start. I think it’s so much harder for artists these days to have a story. A lot of them just start off because they’re friends, or just start doing it on a computer, and the story there, I think, is getting a lot thinner because there are so many people making music. And the art, I think, is so important. A lot of these guys I talk to don’t really have a story or anything. When I post on the blog I try to grab the feel of the playlist and then I always try to pick an image for it. It’s so important to me because I think people get connected to it that way. There’s a feeling from the blog, and without that image, those playlists would just be like text, and no one would care as much. You can wrap it all together.”

In 2004 Alexander founded his label, Moodgadget Records, with the goal of promoting the idea that electronic music is a process, not a genre. Although a lot has changed since its inception, Jakub says “I think back then I found there was a lot of really melodic, pretty music that wasn’t getting a lot of radio play… I wanted the label to be the middle man so that I could get people of all different ages that like all different kinds of stuff to like electronic music. Because there are so many different genres of it. These days people understand that there are tons of them… At that time internet radio wasn’t as big, so people weren’t getting enough prettier electronic music. I knew a lot of people would be into this. There are a lot of people making experimental stuff in that same world I feel like we work in, but I don’t see it as being as catchy or as easy to get into. I was trying to pick things that are more hooky. But even if it was prettier, softer stuff, I tried to pick music that came in quickly and was easier to get into, and that was kind of the goal. I just wanted more people to hear good electronic music that’s not just the dance music (which I still love).

Up next for Heathered Pearls is an as-yet unannounced collaboration with Montreal-based musician Dirty Beaches, who he has remixed in the past. He has a release in the works with Praveen Sharma, who works with Machinedrum as Sepalcure, as well as a slow-disco album with an Italian guitarist. He also hopes to produce his own meditative EP, which will be comprised of two lengthy and hypnotic tracks.

In celebration of the 10th year of Seattle’s superb Decibel Festival next weekend, and the annual Ghostly International showcase it includes, Jakub just made a most magnificent two-hour mix. It is composed of music from the artists that encompass the label’s extraordinary catalog, and deftly defies genre divisions.