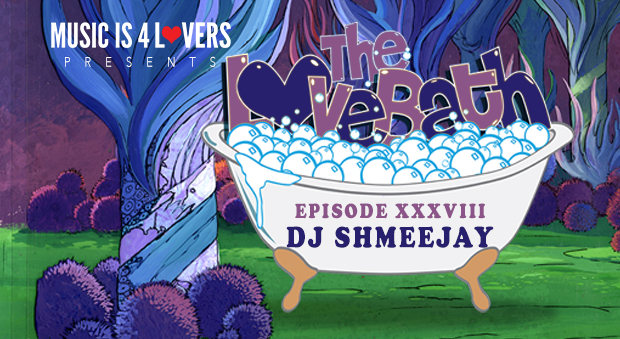 The LoveBath is all hot and bubbly thanks to the efforts of Pacific Northwesterner, dj ShmeeJay. As curator and host of the Ain’t No Big Thing radio program on BoxFrequencyFM, ShmeeJay has been busy pushing out deep, disco and groovy sounds on the digital airwaves with his heavy mix sets and carefully selected guest contributors. Never to take himself too seriously, ShmeeJay’s humor is worn on his sleeve… the jovial selector as assembled a lovely little set for our listening pleasures. I was able to catch up with the man via email to discuss music, radio, a bit of fatherhood and what’s on the horizon…take a dip below.

Tell us a little bit about yourself? Where’d you come from, where are you now? How did music come into your life?
I’m originally from southern Sweden, but currently based in the Pacific Northwest US, or Cascade, as we like to call it up here. Musically, it really began when Beastie Boys came out with Licensed to Ill. My friends and I were smitten, and went straight to buying a drum machine and a sampler. We talked a couple of other friends who were already in bands to play bass and guitar for us, and proceed to start a hip hop cover band. I can honestly say that I was the worst white middle class suburban Swedish rapper ever. But we did have the enthusiasm down. Since then I’ve dabbled in a variety of music. I was in the northwest when grunge hit, and was a part of the local punk/grunge scene here. I was making wired ambient dub music in the 90s with a friend in Oregon under the name NaMa Groove. After a hiatus from music to focus on school, I came back to it and had a hard time getting back into what I had been doing before, and as a way to get inspiration I started to play around with my music collection that I’d amassed over the years. Having dabbled with different types of music for so many years before djing just came naturally.

You run a great radio show called Ain’t No Big Thing and have featured some amazing guests throughout your years. How’d the show come about and what can we expect in the future?
Some five years ago I had been asked to do a guest mix for a bank holiday special for the now defunct GrooveSkool Radio. They dug the mix, and offered me a slot behind Fingerman on Sunday evenings UK time. Back then it was a two hour live show every week and really a great place to be. Fingerman is great, and I really learned a lot working with him and the rest of the crew at GrooveSkool. Over time that weekly two hours became a lot, as there’s also other things I do in life, and I came up with the format I now use for Ain’t No Big Thing. Starting the show off with a guest mix that I mix out of as it runs out, and I then close out thew show by me mixing live. I’ve really grown to appreciate the arrangement as it allows me to work with djs from all over the world. Many that I really admire and am a fan of, but also as it’s my free and independent project so I can do what I want and also have on really cool people that you may not have heard about because they’re not out there pushing the music any more, but that are really talented and have a great taste in music.

The exact and final schedule of guests is always a somewhat dynamic process as people are busy and I keep it flexible to make it all work, but some of my highlights that I look forward to lock in this fall and winter include  Cole Medina, Pete Herbert,  Pontchartrain, The Beat Broker and Dino Soccio among other fun guests of course. Look for the show on the 2nd and 4th Thursday, broadcast live on BoxFrequency.FM’s stream starting at 8pm PST, with the recording posted to SoundCloud and podcast syndicated on iTunes the following day.

Are you making in music or edits yourself?
I do not make music or edits under my ShmeeJay moniker. As the name states, it’s just a lighthearted front for me loving to play other peoples good music. I am involved in another project though, called Cid & Fancy. Cid & Fancy started out as a live disco edit band along with Futurewife and Rob Hanlon, where we did a few gigs around Seattle with Futurewife and I running a couple of computers with Ableton Live and Rob playing synth on top. Best times I’ve had playing music, and out of the prep sessions, we got a few releases out on Midnight Riot, Audaz, and Seattle based label, Bottom Forty. Future wife have moved down to Los Angeles now though, and hence no live shows are scheduled in the near term.

Anything else you’d care to share with us? gigs? releases? etc….
Fall is usually a little quite for me as I keep my schedule clear in order to make time to coach my daughter’s U15 soccer team. It’s good group of girls and staying engaged with my kids’ life and helping to support some bad ass checks growing up is a real priority. So, until that clears I don’t have much in the works, aside from the bimonthly radio show, and Friday November 10 I will be joining Seattle’s Men of Leisure at Outlander Brewery & Pub. If anyone of your readers find themselves in the Seattle area that weekend, they should come get leisurely with us!

Number-one, sure-fire party-starter in your DJ bag right now?
A couple come right to mind…. first, there’s The Silver Rider’s ‘Crown Royal’ that came out on Wall of Fame records last year. It’s a real disco slammer that I can’t help but want to put my hands up for when it’s playing. The other is Henry Greenwood’s update of Neneh Cherry’s ‘Buffalo Stance’. Originally it was only available on vinyl from Greg Wilson’s A&R Edits imprint, but Henry recently made it available digitally too from on his BandCamp page. It’s a great take with much of the original’s elements that I feel in love with back in the 80’s, and then he’s added a real cool piano progression on top that I think really works, particularly if you pitch it up a little.