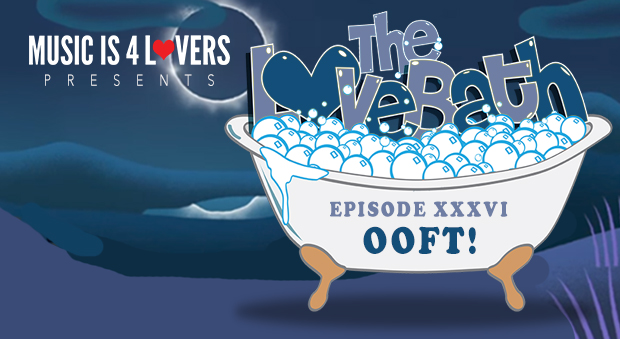 This week, The LoveBath goes across the pond to Glasgow, Scotland with house and disco producer, OOFT!, at the helm. Heavily associated with The Revenge and 6th Borough Project, plus with outings on Instruments of Rapture, The Popular People’s Front, Masterworks Music and his own, Foto Recordings, OOFT!’s profile is synonymous with quality. As a purveyor of low slung disco vibes and gritty, analog house music, OOFT! has earned support from the likes of Tim Sweeney, Jacques Renault, Doc Martin and Dicky Trisco.

With his debut LP, “Intricacies Of Modern Life,” on the way for Foto Recordings, we caught up with OOFT!, nee’ Ali Herron, to chat about his past, present and future in the music world.

Alright, we’re gonna get deep real quick: For me, your previous work alongside artists such as The Revenge, 6th Borough Project and Eddie C plus labels such as Jisco Music, Sleazy Beats Recordings and Instruments Of Rapture… all of this really coalesced at a specific time into a fresh and modern take on sample based house music… challenging conceived notions of what a disco re-edit could be. What’s your take on the current global edit scene?
I’m feeling a bit jaded with a lot of current edit-type stuff, to be honest. Hearing a lot of the same tunes getting re-done over and over again. Also, just sticking a 4/4 kick underneath a disco or soul track isn’t necessarily going to make it any better. Maybe try and go in to the track a bit deeper and get more creative with the sampling aspect or something? Also, guys like The Reflex, etc have shown that you can make something sound beefier and more modern in much subtler ways without just boofing in some 909 kick under there. Don’t get me wrong, I still edit loads and loads of stuff for DJ sets, I just don’t push it out there unless I think it’s genuinely offers something a bit different from the original track. And that is what editing should be – making a song you love fit in with however you want to DJ with it.

Speaking of you and disco, I’ve felt that your recent output has carried a stronger analogue vibe by incorporating motifs of acid house and dub techno. Where do you see disco’s involvement in your current artistic landscape?
I got into the whole DJ/Club scene first and foremost through a deep love of house music, and to be honest when I DJ, that’s what I feel most comfortable doing. Having said that, I’ve always loved disco, soul, 80’s boogie etc and don’t like sticking too long in one genre. I guess also in terms of studio production it’s not easy to create new disco music without great live musicians, and a lot of stuff that does get made nowadays can unfortunately sound like a cheap knock-off of the real stuff from back in disco’s heyday. My studio is all synths and drum machines too so not the perfect base for constructing funky-ass guitar rhythms! Having said that I still take my disco knowledge into the studio, looking for little loops etc that just don’t appear much in other styles of music.

Your personal imprint is Foto Recordings and the offshoot, FOTOX. What can we expect to see down the road from these two labels?
I previously ran a tiny label alongside Graeme Clarke of The Revenge called L.E.S.S. Productions which kicked everything off for us. There was only 10 releases and Graeme carried that idea forward when he launched Instruments of Rapture. I started Foto so that I could have somewhere to release the music I wanted to make without having to pander to whatever styles are in vogue at any particular moment. I’m sure as producers we’ve all felt that crushing disappointment when you’ve made music which (surprisingly to your own ears) doesn’t sound shit and then sent it off to what you think are labels which will be into it, only to get the “thanks but no thanks” treatment. Foto allows me to remain a bit more positive with my own output. I plan to continue Foto for the moment but who knows what will happen in the future. I’m actually really excited as next up on the label will be my debut album, something I’ve been working on for over 3 years so it will be great to finally get it out after such a long gestation period!

Tell us a bit about the mix you prepared for us… anything you’re particularly excited about here?
I wanted to get a lot of the songs I’ve been playing at my monthly residency at The Berkeley Suite in Glasgow into a mix (to mark it for posterity I guess). I mainly play the warm up slot in there hence the fairly lazy tempo at the beginning. Also there are 3 tracks off my forthcoming album in there too plus a couple of edits (obviously). But I wanted it to be stuff that I genuinely play rather than some kind of esoteric mix full of nice music that hasn’t had a lot of mileage from me this year.

Anything else you’d care to share? forthcoming releases or remixes? Recent gigs or upcoming ones you’re excited about?
As I said above – the debut OOFT! album will be out late October/early November. Super excited to share it with everyone! It’s not very disco heavy but there’s still plenty of little samples hidden in the tracks so I hope folk dig it. After getting a good pal to mix and master all the tracks in great detail I think it’s the best sounding music I’ve ever made, so fingers crossed it does ok. Gig-wise I’m just back from The Lost Disco festival in Croatia which was super fun – hanging about with the UK DJ crew –  Horse Meat Disco, Dicky Trisco & Pete Herbert, The Melting Pot folks plus a sizeable squad of Glasgow friends. No booze for a while after that!

#1 one sure-fire party starter currently in your bag?
It’s probably one that I’ve included in the mix – Amadou & Mariam’s “Bofou Safou”, 2017 afro disco and mega-catchy. The original is only 3 minutes-odd long though so I’ve had to edit some major extensions in it for maximum dance floor appeal.