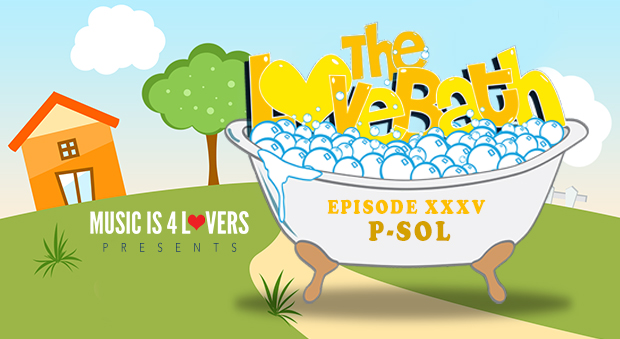 Brooklyn based, P-SOL, is up next with a fresh dip in The LoveBath. A born and raised West-Coaster, P-SOL, nee’ Patrick Sullivan, is a tried and true party-rocker, chart topping producer and head honcho over at Wall Of Fame records. Known as a sure bet for quality jams, P-SOL’s work is characterized by thick, syrupy grooves that lean heavily on classic funk and disco styles. His unique talents of sample archeology and manipulation have crafted many a dancefloor treat from old, dusty and forgotten records. His productions have been featured on labels such as Editorial, Hot Digits, Masterworks Music and Whiskey Pickle Records and he’s garnered support from the likes of Jacques Renault, Horse Meat Disco, Crazy P and The Revenge.

Offering up an hour+ of his trademark sounds, P-SOL’s installment of The LoveBath is sure to stoke the fires and ignite a burning dance party at any time of day.

You’re currently in Brooklyn but originally a West Coast native…what inspired the coastal shift?
In a nutshell, the culture of New York. It’s been said a million times, but living here is unlike anywhere else.

Your label, Wall Of Fame, has carved a good spot for itself on the global edit scene. How’s the label owner experience been for you and what can we expect in the future from Wall Of Fame?
It’s been pretty good. Compared to a lot of my other independent label colleagues, I’d say Wall Of Fame is a bit more low-key and less aggressive with the releases. As far as the future, we will try to be consistent with our taste in releases, both digitally and vinyl. The vinyl route has just taken a shift from “various artists” releases to solo endeavors and seems to be favorable. The first solo release (and our most recent), Alkalino’s “Facelifting” EP, sold out immediately. A repress was issued the same week of the release!

You just had a great little EP drop for Whiskey Pickle… how’s the reception been and whats next for P-SOL? More releases? Remixes? Gigs?
The release has seemed to go pretty well. A handful of big names in the house and disco scene that I look up to had some nice words to say about it- so that’s a good thing.

What’s next?  Staying busy and consistent with the music thing. I have a few digital releases coming out soon. Also, a split vinyl release with Ed Wizard & Disco Double Dee that will be coming out on my label (Wall Of Fame) in the near future.
Gigs?  disco, funk, good music – ehh, not so much unfortunately. I spin at clubs/lounges playing hip hop and party shit 3-4 times a week, but it’s to for the check.

#1 sure-fire party starter in your bag this summer?
The new Fouk “With Lasers” is tight. Session Victim’s new record is nice too. And of course the Alkalino “Facelifting” release is a sure shot as well.