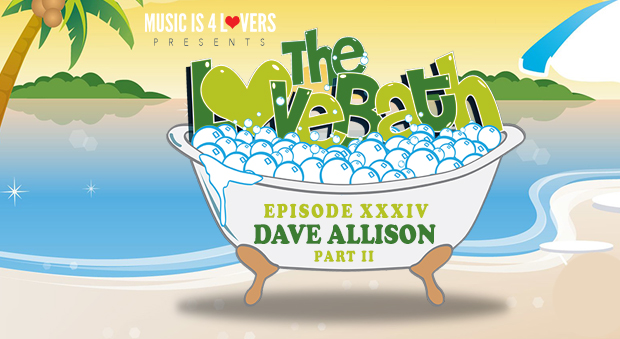 The LoveBath keeps on movin’ and groovin’ with a fresh installment from Montreal’s Dave Allison. A man of many names and talents, most widely known as Ed Wizard & Disco Double Dee…the head honcho at Editorial Records, Allison travels the globe bringing his disco and funk vibes to adoring dance floors and arms thousands of DJs with hot tracks courtesy of his superb label projects. As a label boss, Allison has released tunes and eps from the likes of Pontchartrain, Closed Paradise, Art Of Tones, Yse Saint Laur’Ant, Rayko and many more. As a producer, you’d have no trouble finding his productions on labels such as Disco Deviance, Kolour LTD or Whiskey Disco… all of which carry a hefty seal of approval from tastemakers the world over.

In-between a busy tour schedule, raising a family and releasing his debut album for Editorial, I found the time to nail down some questions with the man himself. Peep the interview below and hit play on his second outing for our LoveBath series… summer time vibes!

Lot’s of folks know you as the brain behind Editorial Records… as a leader in the global edit scene, what would you say is your greatest accomplishment with the label and how do you feel about the label’s past, present and future?
I’m glad to hear  people see it in that light! The label really stemmed from my desire to play something other than house music all nite long during my monthly residency as Salon Daome here in Montreal from 2007-201o. When I didn’t have a special guest joining me on the decks, I really enjoyed the 5 hr sets and I began cultivating a slower sound for the beginning to bring an evolution as the night when on. Starting at 100bpm and getting to 124 definitely made for a more interesting night! I mostly started doing reworks for my self to spin but as I really began to fall in love with the great stuff that Instruments of Rapture and my friends at Sleazybeats were doing, I decided to start up a label as an outlet for it. July of 2009 was the official launch of Editorial Records. As far as an accomplishment, I think one of the main things I have tried to do is assure quality control… something people can depend on. If I don’t want to spin a track, why would I want to release it 😉? You always gotta keep checking in and make sure these values hold true.

There is a new label on the way too, born from the roots of disco and boogie vibes with a larger focus on original production ( with some sampling of course). Be sure to look out for “Clandestine Boogie” 001 vinyl, hitting the streets this fall!

Speaking of Editorial, you recently released your debut LP for the label. Can you give us any insight into how the LP was created or how the project came to fruition?
Sure! I’ve had a number of tracks on 12” samplers and ep’s over the years on some great labels like Kolour LTD, Whiskey Disco, Ubiquity, Midnight Riot, Disco Deviance and obviously, Editorial. With this project though, I wanted to put out a package that would define what slow motion disco is to me. The LP features tracks for all occasions: some you could play out in a club, lounge or pool party or while having a dinner party or cocktail at home. It was important to me that this be something you could listen to front to back and it would sound coherent. I contracted one of my long time friends, the talented Lateef Martin to do the logo and artwork for both the branding of Ed Wizard & Disco Double and the album art, which really helped bring it all together.

Any ‘great whales’ you’d love to land for the label? Artists that you’ve chased that never seem to quite work out?
Things always work out the way they are supposed to and at the right times😊. There are a couple people I check in with every year or so, to remind em I m still  interested, people that influenced me and continually inspire me with their work. However, with traveling and many other label commitments , it means sometimes projects take a few years to reach fruition ( hopefully!) I’m very grateful though to have had so many talented people be apart of the label over the years, excellent bunch! And nice to see it has helped others develop and have successful releases after an initial start with Editorial. That’s also a good feeling .

You recently launched a new label, Ghost Pepper. Anything you care to share about that venture?
I have always had a love for 7 inch records. There is something different about playing music with the restraint of a shorter time, and less agility in manipulating a 7″ vs a 12”, so playing them is a bit different and special. In recent years I’ve been loving and collecting them more and more. I had some bits that were sort of between jazz -funk and instrumental hip hop , that’s kind of the inspiration at the moment for the sound of Ghost Pepper.

You recently did a stint in LA and tour consistently. Any recent experiences you’d care to share or forthcoming gigs you’re excited about?
Its been a busy couple months this summer, which has been great, but excited for a relaxing August with my family.  Some thing’s are on the horizon, but as they are still “TBC”, I’ll defer from talking bout em at present. I did have a fantastic weekend in LA. … an afternoon pool party on Sunset at the Skybar courtesy of the Wikkid Paradise crew. The crowd was very receptive and appreciative and it was cool to hear Goldfish from South Africa for the first time… talented guys. I got to meet up with another Editorial Records Brother – Ziggy Phunk (from Copenhagen) who also threw down right before me on the 1-2’s. Also got to play a surprise last song: when Goldfish’s laptop started overheating in the Cali sun, the sound started crackling. Had to pop a track back on in an emergency just in time to drop Aroop Roy “Talking Bout Life,” which delighted the crowd and got Goldfish rocking some upright bass and live sax.  The laptop was saved by a handy umbrella shortly thereafter. Later that night, I had a wonderful time playing for a young crew called “From The Ground Up.” Justin Barbata and fam are taking it back to the old school proper with amazing warehouse loft parties. From top notch lighting & sound, to great hospitality, positive vibes & receptive dancers… it was a pleasure to drop jams at their event! These guys are doin it right 😉