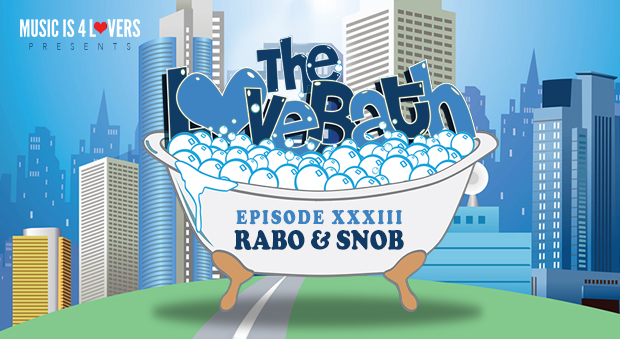 Alright boppers, The LoveBath is back and this time we take a trip to Tel Aviv with the quirky, disco-loving duo of Rabo & Snob. Comprised of DJ/Producers Eyal Rob and Sabo Ronen (aka Obas Nenor), the pair have made a large impact over at the Whiskey Disco label with three solo EPs, appearing on two various artist comps and a brand new solo outing for Whiskey Disco sub-label, Lovedancing.

Relying heavily on their Israeli roots, Rabo & Snob’s edits and productions typically incorporate traditional elements from their homeland or liberally re-appropriate forgotten records for their dance floor re-works. With another new EP on the way and fresh off a blinding night at Tel Aviv’s revered, Romano club…

Rabo & Snob sat down to answer a few q’s I had about their history and the future. Dig their LoveBath installment cut from their recent live set and peep their interview below.

How did Rabo & Snob form? What where the beginnings of your partnership?
Starting as friends with a mutual love of Funk, Disco and vinyl, we started playing records together around 99′ and held a weekly residency for a couple of years. Since that time, we’ve just kept on playing our style in various clubs in Tel Aviv and around the world.

Your submission for The LoveBath was recorded live, yes? Can you give us some background on the gig and how the reception was?
Yes, the mix was recorded live at Romano which is one of the top places in Tel-Aviv right now. There’s great food and an amazing sound system with many tube amps and a vintage Bozak mixer in-house. Each Friday, they throw a party and this mix kinda reflects how we felt that night and the crowd’s reaction to our selection was great. Throughout the night there was a free-positive-happy vibe and all the girls danced… which is a great indicator for us

We threw in classics, modern edit stuff and some of our own productions of course, all vinyl.

You guys are heavily associated with the Whiskey Disco label, how did you meet Laurin and what about the label keeps you coming back?
We both were fans of the label, and a friend who released with Whiskey Disco suggested we send them some demos. Laurin is as friendly and enthusiastic as it gets, and that’s the type of vibe we like to work with.

You just had a massive release on Lovedancing, how’s the reception been?
Yes, the EP just came out a few weeks back, but we’ve been playing the lead track for about two years since it was recorded it in Ghana. Over the years, it became clear we had something special as the tracks always worked so good for us at parties. We were getting mad response from dj’s and party goers around the globe, which is always good to hear. As a producer, you can never really know how and when your music will effect the people at a night. It was such an amazing experience to be able to travel to Ghana and to be able to work with the local talent.

Any exciting plans on the horizon? new releases? remixes? tours?
We are currently finishing an EP of edits and remixes of some obscure, Israeli disco cuts. They’ve been in heavy rotation for awhile now and we’re really happy to finally offer them on vinyl.