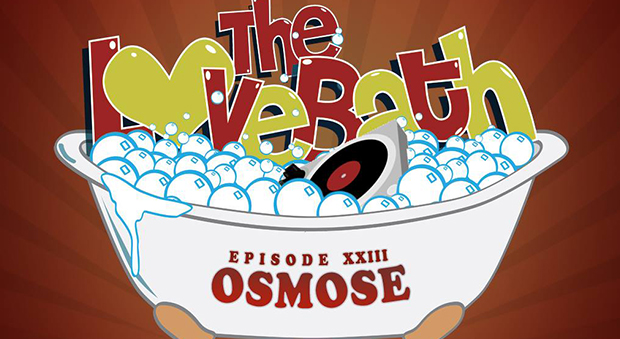 Special “Turntables in the Tub” all vinyl edition of The LoveBath from Atlanta-based DJ, producer and label owner, Osmose.

Osmose has released original jams for labels Whiskey Disco, Masterworks and of course his own label Smokecloud; and is an avid wax junkie, which he expresses in his alluring mantra “All Vinyl All The Time.”

It’s been a hot minute since our last dip in the bubbles so we’re ready for a groovy cleansing.

Learn more about Osmose in the interview below…

Where are you from and where did you grow up?
That’s kind of a 3 part question…Born in Chattanooga, TN and grew up in north Georgia just south of there.  I consider myself from the ATL as I’ve lived there most of my life and I fly out of there for gigs currently.  A little over 2 years ago I built a little post modern crib with a studio for myself & my lady in Athens, GA.  Athens is a liberal college town with a nurturing arts scene about 60-70 miles east of the ATL  It’s real lady back and a good place for an artist to live.  High quality of life + lower cost of living.  It’s also a serious  craft beer town which is good for me too!  (Athens, GA facts = UGA is the oldest public university in the USA 1785  and has the 16th largest Stadium in the world).

Can you describe the scene there for us?
The scene is a college town and all that goes with that.  National Lampoon’s wanted to film Animal House here but the university shot it down so that should give you some idea.  I’m fortunate to work locally with some really good venues like The Georgia Theatre where I’ve done anything from late night dance parties on their rooftop or special dinner events like the Block Party Picnic which is coming up to opening up for Cut Chemist & DJ Shadow playing Afrika Bambaataa’s records in the main room.  I also work with Terrapin Brewery which is one of the largest brewers in GA and has some fine stouts and speciality beers if I do say so myself.  Gigs locally in Athens are tailored musically to what’s going on, where it is and what time it pops off.  So I play a gamut of vinyl sounds from Funk, Soul & Disco 45’s to smoked out and hazy Hip-Hop instrumentals & Classic joints to Dub Reggae to slower Beatdown style Disco reworks.  When playing back in the ATL it’s straight up Beatdown style Disco & House.  On the road travel gig wise I’m usually geared across the tempo range of Beatdown style Disco reworks and certain blend of Deep House and Disco House.

How did you get started with music and go on to launching Smokecloud?
I’ve been DJing for a little over 19 years.  I went to Full Sail in the mid to late 90’s and came out fortunate enough to land gigs at 2 studios in Atlanta; Todd-AO Atlanta which later became Riot and Doppler Studios. So I have been working on DAWs like Pro Tools & the Fairlight since 1998.  Musically I started messing around with hardware units like the MPC2000XL then graduating to an MPC4000 with an expansion card in the mid to early 2000’s as well as a Kurzweil 2000 that was at the studio.  I think around 2009 I started doing some commercial music regional & national for clients at Riot Atlanta and it’s also around that time I noticed I was buying a fair amount of edit records that also had a heavy hand of production to them.  I edited daily in the studio usually supervised with anywhere between 1-10 clients in the room with me, so I was pretty fast at it and not too shabby at chopping & re-chopping library music up to meet the client’s needs.   I started editing tracks for myself during downtown at the studio and at home in Ableton.  Eventually I had some cuts together that I thought would be useful for gigs I was playing and I thought they were decent production wise so that’s what “A Tale Of 2 Dons” the first Smokecloud release is.  I enjoyed the process of putting the record out from working with mastering and the pressing plant to actually trying to sell it to disto and shops, so I just kept it going with the underlying A&R motto of tracks being useful for the types of gigs I was playing.  Now the label has a little more direction and has not only become a vehicle for my own DJ productions like at the beginning , but I’ve also focused in on working with artist that I think have a lot of talent and growth potential.  They’re also artists that are able to communicate very well and I feel I can learn from them either production or mix wise.  I’ve learned a lot working with Sleazy McQueen, The Silver Rider and King Most.

Where did the name Osmose come from?
Misspelling on a flyer in Orlando when I lived there going to Full Sail early on in my DJ career.  I thought it was meant to be so I kept it.  I’m a bad speller…

Drink Of Choice?
I’m a beer man thru and thru..stouts, porters & whites.  However I do love a good Mai Tai and since it’s so hard to find a good one I’ve taught myself how to make 2 that are very good.  Below is an Osmose special Mai Tai:

These elements should be added to a stylish drink glass with crushed ice in the order stated above and then garnished with a pineapple wedge.  Let the drink stand for a couple of minutes before serving.