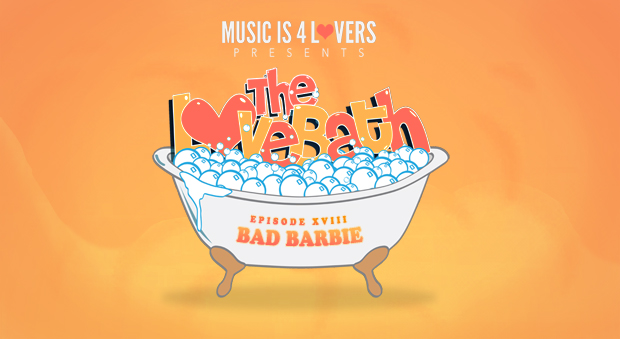 Widely regarded as the First Lady of NuDisco and the Queen of Re-Edits, our guest in The LoveBath this month finds her self smack in the limelight of a currently bubbling disco scene in the UK. She is known for her Bad Barbie Radio Show on Kane FM and her productions have already caught the attention of big ears like Greg Wilson, reaching top positions in the NuDisco/Edits charts on prestigious labels like Midnight Riot!, FKR, Funk Fusion and Deep Sense. Her mix for us is overflowing with soulful music to scrub yourself clean with–so press play and join your partner in the tub as Bad Barbie reveals a seductive selection you won’t want to end… don’t forget to scrub every surface!

** CLICK HERE if you don’t see the SoundCloud player.

Hey Barbie! Thanks for taking the time to talk to us.
Thank you for having me.

First off, where are you from and where are you based now?
Bad Barbie Heights is just outside of London in leafy Surrey. I was born and bred here. In my dreams I long to live on a tropical beach but for me home is and will always be where the heart is.

Your sound is heavily influenced by reggae, house and disco. Does this stem from your childhood or is it a more recent inspiration for you?
During my childhood my dad was a huge influence on me musically. He was a huge fan of Bob Dylan an artist synonymous with the culture of Bootlegging, which I suppose is where my love of Disco Re-Edits comes from. Reggae is and always will be a great passion of mine. I am particularly drawn to the early soulful side such as Rocksteady and Lovers Rock, so pure and innocent I love the sweet naivety of the lyrics. It is a very uplifting spiritually conscious form of music that encourages goodness and for me promotes a real sense of peace. Reggae is the foundation for many types of music without it todays dance music would certainly not exist in its present forms. In Reggae culture someone will create a track which others then take and then create their own interpretation.This competitive creativity in a bid to make the best version leads to the bar being constantly raised which in turn promotes growth in music as a whole. This has fed through to the Edit culture and it is great to see people expressing their own ideas providing their own fresh take on tracks that have existed for a very long time that may have been forgotten. Not to say this is always a good thing as there are many Edits made carelessly and without love which do not further our craft. I hate lazy Editing it makes me very angry. House music and its culture is undeniably the greatest and most important movement of my lifetime. House came along and changed everything. It created a unity that transcended all barrier’s and reminded people they had a right to come together and express themselves wherever they wanted, very exciting times. The government didn’t like this as they weren’t in control and took huge measures to curtail the movement. As a result the underground parties were moved into clubs where they could be better regulated. The sense of freedom to party, peaceful anarchy, most of that culture has been watered down, sanitized and almost eradicated, clubs here in England are being closed left right and centre but House music remains. Like the song says “House is a Feeling” it is and it always will be.

You’ve collaborated with Evil Smarty many times. Why does this collaboration work so well?
I think our collaboration works so well because we are so different almost opposites I suppose. I expect Evil would say it’s because he manages to tolerate me. I am very chaotic in my approach to making music, i like to push boundaries and don’t care much for rules. Evil is extremely good technically, he is fastidious, neat and exacting in his approach. We are also both very opinionated and stubborn, I endlessly push for what I want despite it not always being possible and Evil is very good at saying no (though this doesn’t happen very often) ha ha. Somehow although we have quite different tastes which is apparent in our solo work when we come together something special happens, being able to interpret and understand one another instinctively in a working relationship is not always possible and I count myself very lucky.

Aside from disco and edits, what sort of artists and sounds are you most inspired by?
I am inspired by anyone who has an strong love for their scene and a passion for what they create. I appreciate deep feeling, waywardness and a strong will to succeed. There are many people creating tracks that i’m not into they just aren’t my bag but if I recognize heart in them they have my respect.

What can you tell us about the disco scene right now in London?
I think our scene is growing the world over right now and as with so many underground movements London is at the forefront once again. Over the last couple of years there has been a huge surge in Disco/Re-edit releases and this is finally starting to feed through into the clubs and bars. Disco is fun, creates a good vibe and people need that right now.

What are you up to at the moment?
The answer to that is music and more music. I am constantly digging for new tunes to play on my radio show on Kane fm. At weekends I can be found playing pretty music at various clubs in and around the UK. I have also been working hard with Evil on a special collection of tracks which make up the first release on my very own label “Bad Beats” coming early 2016. Right now i am working on my first solo Ep a collection of official remixes for a wicked Funk band called The Fat Badgers. When I’m not doing this you can find me tucked up in my Disco bed with Ken.

Tell us about your LoveBath…
My LoveBath is mean’t to be played very late at night with that special someone. If you don’t have that someone special play them this and you soon will have.

Drink of choice?
Strong Dark Rum or a Pint of Stella please x