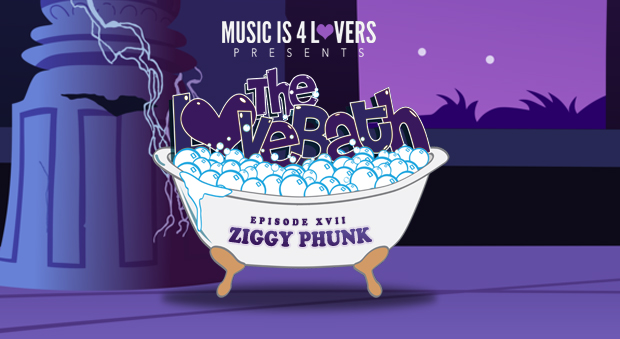 We’re back with more arousing material for our latest installment of The LoveBath… and this month we’ve got Copenhagen’s Ziggy Phunk on the mix! Ziggy has been on our radar for a long time and we were glad to finally get the chance to chat him up. Since last year he has been seducing some top quality labels with his music such as Midnight Riot!, Good For You Records, Funk Fusion, Mallorca’s Spa In Disco outfit and also 80’s Child’s Masterworks Music. He tastefully injects forgotten gems with his own touch making them ready for modern dance floors, while staying true to the atmosphere and style of the originals. This Bath he’s poured us is dripping with sexy disco cuts and erotic 80s funk for you to enjoy… hopefully with a special someone. Take a dip!

** CLICK HERE if you don’t see the SoundCloud player.

Where are you from and how did you get into music?
First of all thanks for having me! Im from Copenhagen, Denmark…

I’ve one way or another always been into music. I had parents who were dedicated music lovers and almost fed me with the sounds of INXS, The Cure, Depeche Mode, Kraftwerk, Yello, The Rolling Stones, Giorgio Moroder, Donna Summer, Whitney Houston, Luther Vandross and so on from I started to walk, plus I started playing drums when I was 7 years old and did that for 9 years.
I started to DJ when I was 18 while I was a promoter on one of the leading underground clubs in Copenhagen at that point in time. I got into the disco editing scene after I in 2011 heard stuff from producers such as Late Night Tuff Guy, Rayko, Get Down Edits and Deep and Disco. I instantly loved the way the original songs were beefed up, looped and sounded fat on a club system but the original vibe & sound was still there. This was the starting point for my love for editing and reworking.

Can you describe a few a your favorite gigs? What are some elements that make for an ideal party for you?
One of my favorite gigs I had was on the Sofitel Cairo El Gezirah in Cairo with a view over The Nile. It was a hotel restaurant lounge and the atmosphere and vibe there was amazing.   Another gig that stands out for me was when I had a 4 hour gig on the Asmani Terrasse in Anthalya with the sunset in the horizon.  The essentials for a nice party is the vibe, atmosphere and the people attending the event. I’d rather have only 50 people dedicated to the music- and the party where everyone’s on the dancefloor having a good time, than play on a club of 500 people and no one is out dancing but only enjoying their “tables and expensive bottles”!

Where are some places people can hear you spin?
At the moment it would be Honey Ryder Cocktail Lounge where I get to spin all of my favorite Soulful Funky House. Love that place, the atmosphere are always nice, so I’m really happy to be playing there.

Describe the scene in your hometown?
Copenhagen is a small city, but overall there is a great scene for disco & funk with a small handfull of dedicated disco heads trying to bring the feeling of the good old 70s & 80s into the nightlife og Copenhagen, especially the meatpacking district of Copenhagen is a great place to find the disco parties. There’s one event with a new location everytime called “Love Hangover” which is amazing. The  guys running those parties are all old incarnated disco heads, they manage to bring back the feeling of Studio 54 and Paradise Garage to their parties. Everyone’s happy and dancing, so the dancefloor is packed all night, there’s always the best vibe and even drag queens are showing up to the parties.

Unfortunately for a house lover as I am as well, the house scene in Copenhagen (for “real” deep house & soulful funky house etc.) is really small! Copenhagen is really commercial and mainstream on that point which sucks.

What about your take on production? Do you have a certain standard when getting ready to make a new track? Would you consider anything off limits?
I don’t think there are any “off limits”. Basically it’s just about extending the good parts and remove other parts you think don’t fit in for a modern dancefloor and then sample from other tracks to bring in some new life to the song you’re editing – but most importantly in my eyes is to keep the atmosphere and style of the original..!  Of course if we’re talking remixes then major changes are fully acceptable

Tell us about some of your other hobbies?
Besides music, my second biggest hobby is to paint and draw! I love to put on some quiet melancholic/chill-out music on a rainy cloudy day and just dedicate a couple of hours to my pencils and paper.

Tell us about your LoveBath…
It’s a selection of some sexier and bit slower disco edits & reworks I love – this is how an early dj set could sound like and then as the night continues the tempo will rise!