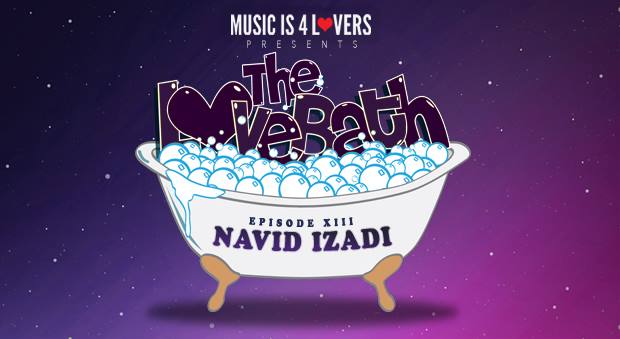 What happens below the bubbles stays below the bubbles, and this month the bathroom is getting real steamy with the Crew Love sextraordinaire Navid Izadi. Derived from the San Francisco rub-a-dub-dub club hub, Navid now travels the world spreading his funkadelic essence to any and everyone willing to open their pores to his soapy jams. We’re ass-specially sexcited for this LoveBath Episode. Enjoy, Lovers! We did… twice.

* CLICK HERE  if you do not see the SoundCloud player.

Tell us some basics. Where are you from?

Where’d you grow up and how did that have an effect on the music you make today?

I grew up in the East Bay Area. I guess it had an effect on me because everybody around me was trying hard to be a gangsta, this being early 90s, California. So I guess my first introduction to Hip-Hop and to music was with Cali gangster shit because everybody was into it and I wanted to be down with the cool kids. I got into deeper Hip-Hop like Rawkus Records and stuff when I went to boarding school on the East Coast. In my household there was a mix of big pop guys like Madonna, MJ and Prince, with some Bob Marley, Police, Persian stuff mixed in. Also like, Enigma, Deep Forest, shit like that would come out once in a while. Then I got into house and disco when I moved to SF when I was around 18 or 19.

How would you categorize the music you make? We know a lot of musicians don’t like to put labels on the music they make, but we were wondering what you tell people you make.

That’s always a tough question for me to answer because I honestly don’t know.

If I’m put on the spot and have to answer the question, I usually mumble some combination of house/funk/hip-hop/disco/pop etc with “y”s at the end of them. “Like, housey, funky, poppish, discoey rap shit”.

How did you get involved with the W+L guys and Crew Love? Did they find you or did you find them?

I was working a lot with PillowTalk around the time they hooked up with the crew, and also did some vocal stuff for Deniz’s album around that time. After meeting Gadi through those guys I sent over some music and voila. I’d say we found each other.

Tell us a little bit about your production ritual. How do you start making a track? Is it something natural, or do you have some sort of method you follow to get you started?

It all depends. Sometimes I’ll start playing with drum machines and then head over to the synths for bass and take it from there. Sometimes I’ll start of sampling an old record or something and then usually the samples dictate what comes next and what’s needed to take it somewhere. Then there’s times I just noodle around on the synth and if there’s a really pretty chord or lead or something that can be the foundation of something. I want to start with vocals more often but I’ve made a terrible habit of separating my production mind and my vocals mind. So yeah again, it all depends.

What are some of your favorite toys to play with in the studio? Anything in particular that has revolutionized the way you make music?

I love all my babies. The Juno 60 was the one I learned a lot from and still is such a badass. I love my 808 and 707 and even the TR-8 is cool because its so easy to mess with. I have a lot of real instruments that are really cool. Like, I have a few classical Persian instruments that make some amazing sounds, and I try to collect at least instruments from places I travel to. I’ve recently been getting really into FM synths. The DW-8000 from Korg and the Yamaha DX-100 are two new pieces that have been really inspiring.

Have you always been a singer? Or was that something you discovered you enjoyed doing after learning to make music?

Definitely not. I was a rapper since I was like 12 and beat boxed a lot when I was a kid, but I never really tried to sing on a track until just a few years ago. I still wouldn’t say I’m a singer, per se. I’m definitely not trained or professional, but I guess I get lucky once in a while. It’s an amazing form of expression and I’d love to make time to hone it in more.

Tell us about your mix. What are some of your favorite songs you’ve included?

It’s a pretty eclectic mix of sexy jams I’ve been fond of over the years. I tried to think of a series of scenes in a movie, maybe a blacksploitation movie, that revolve around a bathtub, or maybe in a bar or disco and then end up at a bathtub, obviously provocative, over-the-top stuff. I wanted it inspire imagery. I also added some hygiene skits because they’re hilarious and are great mood directors, haha.

Some of the tracks that I’ve loved for years on there are Matrix – Stay, Tubb’s Jam from my friend Kenneth Scott is awesome, and some others. Also a lot of 90s house records I really love that have that bumped out 90s R&B groove.

What is a LoveBath to you?

Besides a sweet podcast series? I’d say a love bath is when two (or more) lovers make like koi fish in a body of water, slipping around each other until the borders of their individuality melt into a warm and wet oneness.

What are your top 3 sex jams of all time?

Claudja Barry – Love for the Sake of Love

Art of Noise – Moments in Love

Anything from R. Kelly

I’d say either the 70s or 80s because I would have loved to be around to see when all the toys started coming out and revolutionizing music. It must have been incredibly exciting to get involved with that and to witness all these new sounds being created for the first time. Also the party was so pinnacle! Being in a culture that prioritized fun and revolved so heavily around music probably made it the best era to be a musician.

– Love is the Answer