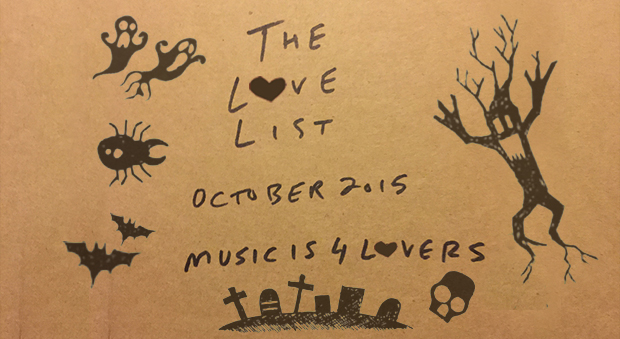 It’s that time of the month again–the Love List is back!

It’s tough going through endless music, so we hand-select 20 tracks every month to share with our Lovers.

Composing this List is a laborious mission, as so much amazing music hits the shelves every day; but we battled our way through hours of digging and prepping to bring you these 20 incredible tracks released in October 2015.

The Love List is one place to find what music we’re feelin’ every month. Enjoy!

1) Feder feat. Lyse – Goodbye (Original Mix) [Atlantic Records UK] – 2015-10-02
Who would of thought that Atlantic Records would be putting out quality electronic music?  Well they really put out something special with this new release from Feder and it seems like a great way to open the mix.

2) Tschavek – Playing With Fire feat. Andreas Fermuller (Original Mix) [Suicide Robot] – 2015-10-05
Suicide Robot has been putting out some cool music this past year and they give us this emotionally deep tune from Tschavek.

3) Mano Le Tough – Empty Early Years and The Seed (Original Mix) [Permanent Vacation] – 2015-10-09
We can’t wait for Mano’s album to come out later this year, but until then we will have to just be happy with this single he put out this month.  Such a great tune.

4) Betoko – Blisters (Johannes Brecht Remix) [Hedonism Music] – 2015-10-02
Whether you are a fan of Betoko or not, you cannot deny this amazing remix from Johannes Brecht. Simply stunning!

6) Nico Stojan feat. JAW – Blue Hour (Original Mix) [URSL] – 2015-10-12
Nico Stojan put out an amazing debut album this month on URSL, and this is just one of the many tracks on it that are superb.

7) Holtoug – Stay In Love (Acid Pauli’s Bone Drone Remix) [Hafendisko] – 2015-10-02
Acid Pauli, need we say more?  This man never fails to amaze and he once again delivers a terrific remix as only Acid Pauli can do.

8) Cajetanus – Little Helper 198-5 (Original Mix) [Little Helpers] – 2015-10-20
Butane’s Little Helpers is a label we all know, mostly known for putting a more minimal techy sound, we get this deep gem from Cajetanus which made the list.

9) Miyagi – Illusion (Soul Button Remix) [Einmusika Recordings] – 2015-10-21
Soul Button has been on fire this year and we se him keep the flame a blazing with this superb remix on Einmusika.

10) LUM – Urpillay (Bedouin Remix) [Rebellion] – 2015-10-02
Bedouin have been another super group of 2015 putting out some quality tunes with a definitive sound.  Here they make their debut on Rebellion and give us this enchanting remix.

11) Johannes Brecht & Stimming – Stekker (Original Mix) [Diynamic] – 2015-10-16
Diynamic is a powerhouse label and their is no denying that. Stimming may possibly be one of the best producers in the game.  When you combine these two you know you are going to get a great record.

15) Spornick – Guy Montag (Original Mix) [La Papillon] – 2015-10-19
Upfull and deep, we love this tune from Spornick, and so must of the label, no wonder why they re-released the tune this month!

16) Fovus Loir – Pieces (Original Mix) [Touch Of Class] – 2015-10-23
Touch Of Class always impress us with their musical releases and they give us this quality tune from Fovus Loir.

18) Wayne Duggan – Experiment 1 (Matthias Meyer & Patlac Remix) [RePublik Music] – 2015-10-05
Matthias Meyer and Patlac on one remix together…?  That is a recipe for success and this remix is nothing short of sublime.

20) Lopezhouse feat. Angela – Mude Tod (Original Mix) [Dirtybird] – 2015-10-12
Dirtybird are a dominate force in the scene known for releasing some pretty wild music, but they tone it down a bit with this release and give us something epic. A great way to end the list!