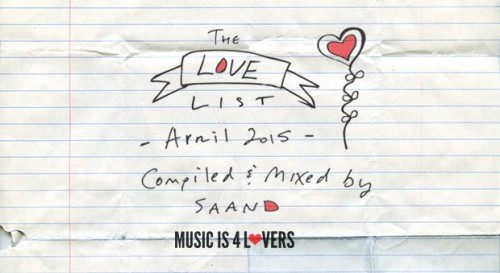 It’s that time of the month again and we have a brand new Love List with our top picks from April.

This month we have SAAND on selection duties as he picks 20 tracks that he thought you should listen to this month.  Enjoy!

We start the Love List out with this monster of a track to come out this month.  George Fitzgerald just put out an amazing  album, “Fading Love,” and this tune is certainly one of the many highlights of the release.

Butane’s label Little Helpers have been putting out all sorts of different types of deep, techno, and minimal, and they hit the nail on the head with this release from Roy Okev.  A vibey tune, this whole release is awesome.

Dauwd is just one of those producers who when you know he is going to put out a track it is going to be amazing.  Once again he displays his talents with this beautiful orchestrated piece.

This remix from Sabb has it all!  Rise, fall, drama, pretty vocals, a wicked groove, and even some strings at the end to top it all off.  A serious groover, this tune is dope!

Monkey Safari remixing Marc Houle on Richie Hawtin’s label.  YES PLEASE!!!  A beautiful anthem of a track from Monkey Safari, expect many DJs to be playing this come sunrise.

Another sunrise jam, Aus Music give us this great piece of music from Bwana.  The label has really established itself for quality tunes and gives us something deep with this 7am anthem.

Eagles & Butterflies has been blowing up lately, putting out a load of massive tunes, he drops this dope remix of Freakme on Get Physical It just seems there is no stopping this rising star.

Poker Flat Recordings has been putting out some serious tunes lately and they keep delivering with this trippy deep bomb from Johannes Brecht.

Damian Lazarus reinvents himself with his new band The Ancient Moons and gives us this special tune with some large remixers.  We chose Agoria’s from the package, but every version is a winner.

Dave DK is a genius, the way he perfectly blends textures and sounds is timeless. tHis music that just whisps you away and this single off his new album is just one of the incredible works that he just released.  Check out his whole album “Val Maira,” it is something special.

All the big names have been remixing WhoMadeWho. This indie electronic band has taken a shine to so many big names, and this time Robag Wruhme delivers an elegant gem of a remix as only Robag can do.

Christian Loffler has had a tremendous year releasing some of the most gorgeous music and he once again blows us away with his brand new 3 track EP “York.”  Every tune is a gem and we chose the title tune to toss in on the mix.

Climbers team up with Thomas Gandey to deliver this fresh tune O.C.D.  Something different from the duo, we love the blend of indie and deep that they effortless pull off.  A massive track from the duo showing their versatility as producers.

Since Him_Self_Her entered the scene and sat atop the beatport charts for months, they have been on everyone’s want list, and you can see why with this dope remix they did of Jaap Ligthart’s tune.  The original mix is also pretty awesome.

Off Recordings is a label that has firmly established itself as one of the leaders in releasing dance music and label head Andre Crom teams up with his new production partner Thanh to bring us “Freedom Call” featuring vocals from Jinadu.  With a hard deep tech vibe and some classic 90’s sounding vocals, this tune is another big release from the label.

My Favorite Robot Records is a label that you know delivers quality.  A label that will not be held down by genres or the trend, they always seem to put out incredible thought provoking music.  With two killer EP’s coming out this month on the label and almost every tune being top notch, it was tough to pick one we liked best, but Mateo Murphy’s ‘Steam” made the cut.  A super deep and groovy tune, this whole release is quality.

Sometimes you just want to play something a little different.  We dug deep for this one and found this cosmically enchanting tune from Nic Briel.

Luca Bachetti’s Endless has been putting out some stellar music lately and the label does it once again with a killer 3 track EP from Cosmic Cowboys. Every tune is a winner, but the one track that stood out to us was “Enlight.”

Betoko’s label Chilli Mint has been putting out some proper new deep as of late and this new release from The White Shadow is no exception.  A wonderfully deep tune, expect to hear a lot of DJs playing this one out.

Sublimely deep, we couldn’t think of a better way to end this list then with this lovely tune.  We dug deep for this one and hope you enjoy it as much as we do.