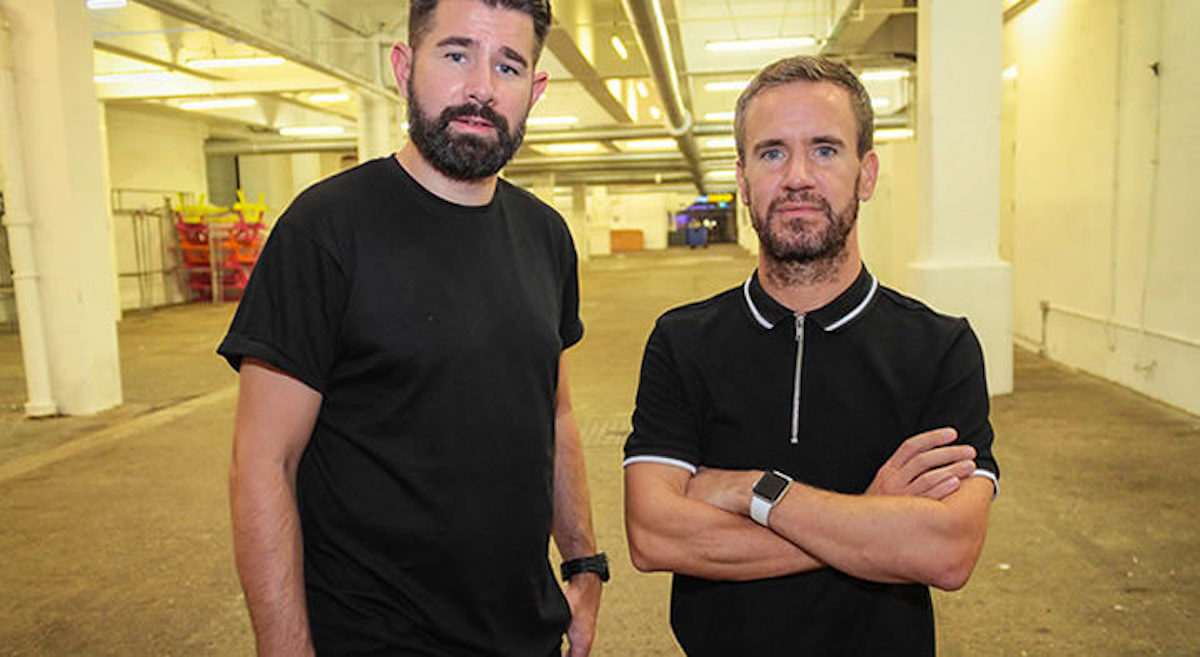 London-based Deeptrak, aka Grant Richards and Tony Nicholls, formed several years ago and have had much success as a dynamic duo. Working independently in the UK’s capital and South East since the turn of the century, they were both long-standing residents for two of the countries most recognised brands – Kinky Malinki and Clockwork Orange respectively.

Their most successful track to date has been their update of UK Garage classic ‘Girls Like Us’ by B15 Project, which they eventually signed to Armada following a bidding war sparked by a video of the remix on their Facebook page went viral pretty much overnight, amassing over 3 million views along with several plays on Radio One.

Ahead of their latest single, ‘Give Me Some Space’ featuring Simone, on fellow Londoner’s KORT’s amazing Tropical Velvet label out this Friday (29th January), we sat down with ‘The Nicest Smelling DJ in the Game’(!) to chat about life, music and what’s on the horizon.

Hi Grant, hope you’re well. Bit of an overused question these days, but how are you coping with lockdown?

I don’t know how things would’ve been if my wife hadn’t come up with various challenges and strange, fun things to do to try and forget you’re rattling around your flat 24hrs a day. I’ve also listened to a ton of podcasts, which I didn’t do quite as much before COVID.

We mentioned very briefly in the intro how you met Tony, could you fill in the blanks? You were kinda like DJing ships in the night, huh?! How long did it take to get some music together and start pitching to labels?

Tony was already a big deal locally when I was starting up, so I was often in clubs he’d play in and eventually we crossed paths when he was booked for Kinky Malinki too.

We then ended up being on quite a lot of the same events, but booked in different rooms, and even on the same pirate radio station – House FM. We eventually got together through a mutual friend, singer Emma Black, and I joined Deeptrak. They’d already had some success with releases on David Penn and Simon Marlin (of Shapeshifters fame) labels, and also remixes for Todd Terry, NY’s Finest and Victor Romeo.

Before we get into the new single, can you tell us about the bidding war with Armada? That must have been pretty intense…

It was NOT fun in the least bit! An amazing situation to be in having Armada and Azuli (who were owned by Defected at the time) trying to sign the remix, but we were only the remix artists. We had no real say. We were actually told at one point that if we don’t sign with Armada then they’ll just get a soundalike remix made.

‘Give Me Some Space’ is a fantastic vocal houser with bags of radio potential. You have a habit of working with some great singers, it sets you apart from so many. Tell us about Simone, the genesis of the track and hooking up with KORT.

Glad you like it. We felt we were sitting on something with some potential so I sent it over to KORT. Ben came back within an hour or so with something like ‘I F-ing love it, think we could really do something with this‘. We’d released with them before so that positive response was enough for us to sign with him again.

When you research labels to pitch music to, what are some of your must haves?

I touched on it previously, that to have the label truly invested in the track and genuinely feeling the music rather than just signing loads of stuff and playing a numbers game to see what sticks. Also, it’s not a deal breaker, but I’m a big fan of decent communication. All that ‘oh I missed it’ gets a bit tiresome after a while.

Chatting to another UK artist (Scott Diaz) about vocal house, he said: “there’s been more of a trend generally towards less vocals, and less ambitious vocal projects and songs generally, within house music.” due to costs, talent and opportunities. Would you agree?

100%. I always feel that you have to invest in yourself, but all the costs add up and some would think ‘I can make an instrumental banger’ or use a vocal snippet off Splice. There is also the added technical element of recording and producing the vocals that some people just probably can’t be arsed with!?

With you both being DJs first, how hard has it been having a forced hiatus? What are your thoughts on so-called plague raves? We hear there was one this past weekend in Hackney…

I live about 15 minutes from that party!! I can definitely understand why people want to do it and loads of people go ‘it’s like the old rave days’ but the difference is there wasn’t COVID back then.

As far as the forced hiatus, the Government have been a joke in general but even more so in regard to the entertainment industry. No real road map for recovery: an entire industry that contributes so much to the economy has been hung out to dry.

The UK Government seems hellbent on keeping hospitality and clubs closed for the foreseeable, what would suggest is a likely plan to see us back enjoying the dance floor?

Address the issue properly for a start. None of this lip service we currently have. What do the government think that the young voters want to do? Staying at home whilst they are in their peak partying years? They wanna dance, forget about their worries, meet fun strangers; the things we all love about clubbing & why it’s as important as it is.

Loads of clubs have been affected in the capital. Talk us through some of your favourite haunts and what made them unique?

I mentioned me and Tony playing in different rooms at a gig and one of those was at Turnmills. It was a sprawling club with loads of different rooms where you’d always lose a mate or two.

The ultimate club for both of us was The Cross. I think most people who went would agree it was a perfect club. It was in some railway arches at Kings Cross. There’s been plenty of other clubs in arches across London but there was something magical about The Cross.

Well, it’s been great to chat. Good luck with the release, is there anything else you’d like to mention?

Be a bit more thoughtful, be nicer & be sure you stream our new tune. Please x

You can grab a copy of Deeptrak’s new release here and here.