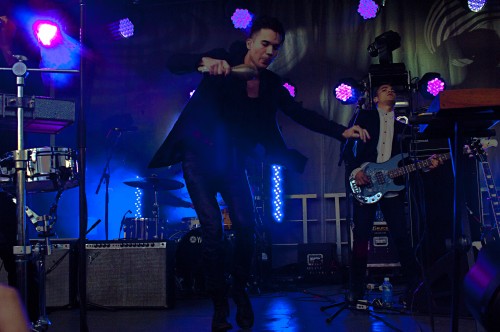 The first ever U.S. expedition of Australia’s St. Jerome’s Laneway Festival was a smashing success! The one-day affair went down on Saturday, September 14th, at the outdoor grounds of Meadowbrook in Rochester, Michigan. The inaugural event’s sophisticated lineup drew over 7,500 attendees for what was an absolutely picture perfect day.

Although the first band wasn’t scheduled to start until 12:40 PM, the eager attendees were meandering in as soon as the gates allowed at 11:00. The sun was shining with a gentle breeze, as five stages swelled with some of the sweetest sounds around. Of special note was the Movement stage curated by Paxahau, who exclusively booked artists from the ever innovative imprint, Ghostly International. On hand all day, and beaming bright like a proud papa, was Ghostly’s founder, Sam Valenti IV.

Heathered Pearls, the stage alias of Polish-born, Brooklyn-dwelling Jakub Alexander, opened the stage at 2:40, with a hypnotizing, ‘low level’ all-electronic set. Performing on a minimal setup that excluded the presence of a laptop, Jakub seemingly cast a spell on those in attendance, who all found themselves sprawled on their backs in the grass, his celestial sounds washing over them as wispy clouds drifted through the sky. Appropriately placed on the table next to his equipment sat a sizable quartz crystal ball.

Livening things up after Heathered Pearlswas Brooklyn duo Beacon. Currently touring for their latest LP The Ways We Separate, the pair created bass-driven music layered with synths, textured loops and drum machines. Thomas Mullarney’s vocals seductively swept over the swaying crowd, as the duality of the duo’s energetic melodies and dark poppy beats made for a lush and lively 45 minute set. They closed with ‘No Body,’ the title track off their 2012 debut EP, to a captivated crowd who bobbed their heads to the beat.

Zach Saginaw, better known by his middle name of Shigeto, took the stage next. The drummer/producer’sMotown influences and jazz background were ever apparent, as his set had incredible fluidity, flowing freely from one tune to the next. He banged with bravado on his acoustic drum set, before moving to his laptop to produce his signature instrumental, ambient arrangements, heavy in hip-hop influenced beats and saturated in samples. It was an exuberant 50 minute set; the dexterity with which he destroyed those drums, and the meticulousness of every experimental melody, made for a most enjoyable experience.

The day took a drastic turn toward the dark side when penultimate act ADULT. got on stage. The husband and wife act of Adam Lee Miller and Nicola Kuperus unleashed a beast of an electropunk performance in an unusually sunny setting. Multiple times throughout their hour long set, Nicola remarked how strange it was to sing their stark songs in the sunshine, as she constantly tested the length of her microphone cord by coming into the crowd as she crooned. Donning clothes as dark as their music, they had the throng thoroughly thrashing.

Closing the stage was the matchless Matthew Dear, whose culminating set saw day turn to night, as he shook maracas and tambourines to the beat of a live bass and drums. The consummate class-act, dressed in all black, had the uncontainable crowd mesmerized from the moment he opened his mouth. Highlights of the performance included Black City singles ‘You Put a Smell on Me’ and ‘Slowdance,’ before ending with ‘Her Fantasy,’ off 2012’s brilliant Beams.

At the official after party, Paxahau resident DJ Erno the Inferno kept the day’s euphoric energy alive, delivering a serious serving of delicious deep house. Dropping meditatively melodic music like Avatism’s ‘Slow Hearts’ and Deetron’s ‘Collide,’ Erno masterfully maneuvered the mood from festival mode to party time. Next up was Matthew Dear for Round Two, who took his turn behind the tables after his provocative live performance earlier in the day. He titillated with a tribal techno set that turned the place primitive, stealing our souls with his sensually savage sounds.

Our souls were restored, and ever lifted, when the outstanding outing came to a close with a spirited set from Glasgow outfit CHVRCHES. The trio’s sweet synth-pop sound (and adorable lead singer) made for a most magical conclusion to the divine dream of a day. From the festival layout, to the grounds themselves, from those who paid to those who played, the event was nothing short of flawless.

All images by David Shanaman