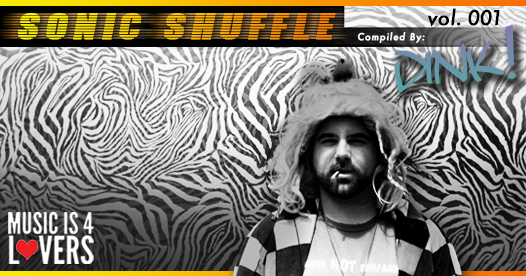 For those who don’t know me already, my name is DINK! and I will be compiling a list of my top five tracks every other week. I like a wide range of electronic music and don’t discriminate as long as it’s tasteful, so in order to keep things interesting I will be choosing one track from each of the following genres:

I just recently came across German producer Oskar Offermann. After going through his back catalog, I came across this bad boy. Released 5 years ago on Berlin-based label WHITE Records, this deep house gem certainly withstands the test of time. It combines sexy chords and soulful dialogue with a juicy bass line, and does so rather successfully.

To be honest, I have no idea how to pronounce this person’s name, nor do I know anything about them or the label it’s on, but this track is incredible. It’s more like something I would play if I were spinning a yoga class, but this vinyl-only, B-side track is one of those tunes you can just play on repeat and never get sick of. It’s 132 BPM so it has more of a garage or dubstep-sounding drumbeat, but the chords and soothing high-pitched vocals give it a mellow vibe overall.

Over the years, Christian Burkhardt has consistently delivered quality releases that are minimal, but sonically unique and still groovy. This new one in collaboration with Daniel Roth does not disappoint. There isn’t really much melody going on in this one, but the bass line is just so damn good! Listen for yourself…

This is the oldest track on my list, originally released in June of 2007. I remember I had just finished my junior year of college at the University of Colorado, which is when I first discovered the Italian techno legend Dusty Kid. I remember first hearing the A-Side track “Kore” in John Digweed’s ‘Transitions vol.2’ mix CD. It was my favorite track in the mix and still probably one of my all-time favorite techno songs. This was right about the time that I first started DJing, and I remember buying the Dusty Kid EP off Beatport, and discovering this gem of a B-Side. I never really play this song in my sets because it’s 13 ½ minutes long and well, I’m not playing many 3+ hour sets, so I tend to play out shorter tracks, but this timeless heater is still one of the most well-produced techno tracks I’ve ever heard. The bass line sounds crisper than most of the stuff I’m currently hearing a decade later.

This one goes hard in the paint! Serving up lots of attitude with some unique drum breaks and heavy sub bass. I’ve been following this young UK producer for a couple years now, however I don’t really know too much about him. But his sound is bassy and breaky with lots of bootyliciousness. Bromley appears to have a bright future ahead.