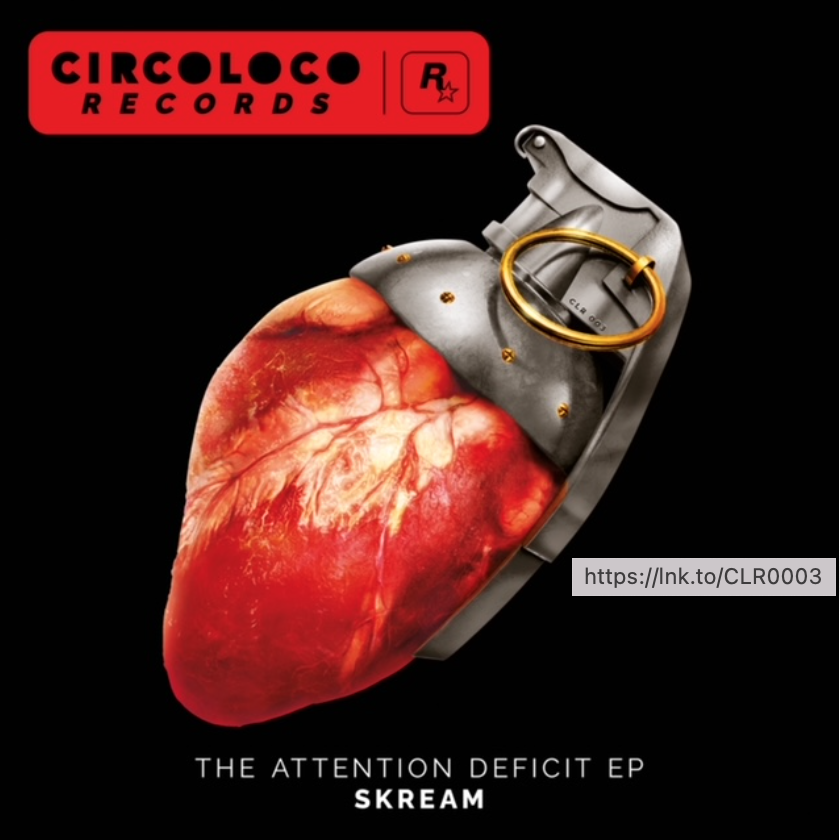 His first EP since last year’s ‘Chesters Groove’, ‘The Attention Deficit EP’ is a three-track release that showcases Skream’s versatility as a producer. First up is title track and recent single ‘The Attention Deficit Track’, a punchy club banger in collaboration with close friend Jackmaster that draws inspiration from Italian innovator Lory D. Next up Skream goes solo on ‘Floral’, an ethereal dancefloor creation that pairs floaty synths with fleeting vocals, before things are closed out with the piano-driven cosmic vibes of ‘Track 3’, produced alongside fellow UK talent Jansons of Four Thirty Two and Hot Creations fame.

“I’m really happy I had the chance to present 3 different types of track for this EP,” Skream explained. “With Circoloco and Rockstar Games coming together for the Circoloco Records label, their cultural legacies and their support of a broad spectrum of sounds, it’s perfect for producers like me who don’t want to sit in the one genre musically.“

Breaking down the three tracks available on the EP, Skream explained: “Floral’s breaks, depth and the emotion of the record should dovetail into record boxes across fans of various areas of my full career to date.  I’m in a place where some of the exciting raw new talent coming through are discovering my earlier sounds, so I feel this track can marry with those and where I am at now musically.“

“Track 3 came from sessions where Jansons and I had produced a number of tracks, and Track 3 brought that lights up, euphoric, hugging synth happiness every time it was played in the rave.“

The EP will be the third release from CircoLoco Records, the label partnership between Circoloco and Rockstar Games. Dedicated to uniquely presenting, supporting, and elevating forward thinking music and culture, the imprint embodies both brands’ longstanding history of championing and elevating club culture, as well as generations of underground DJs, artists and icons on a global scale.

It follows the release of the Monday Dreamin’ compilation, which featured visionaries and icons from every era of Circoloco’s greatest parties, including Carl Craig, Moodymann, Kerri Chandler, Sama Abdulhadi, DJ Tennis and tINI, and ‘CircoLoco Records and NEZ Present CLR 002’, a genre-blending EP from NEZ featuring guest appearances from Moodymann, ScHoolboy Q and Gangsta Boo, with each release featured in-game in the massively successful GTA Online.

Starting out as a pioneer of dubstep in the early 2000s, Skream has since become one of the most respected and versatile names from the world of dance music, headlining festivals worldwide, producing #1 records and releasing underground classics. This year he has dropped remixes of ‘Gaia’ by French artist Loran and ‘beachin’ by piri and Tommy Villiers.

This record further cements Skream’s status as one of the most talented British artists of his generation.