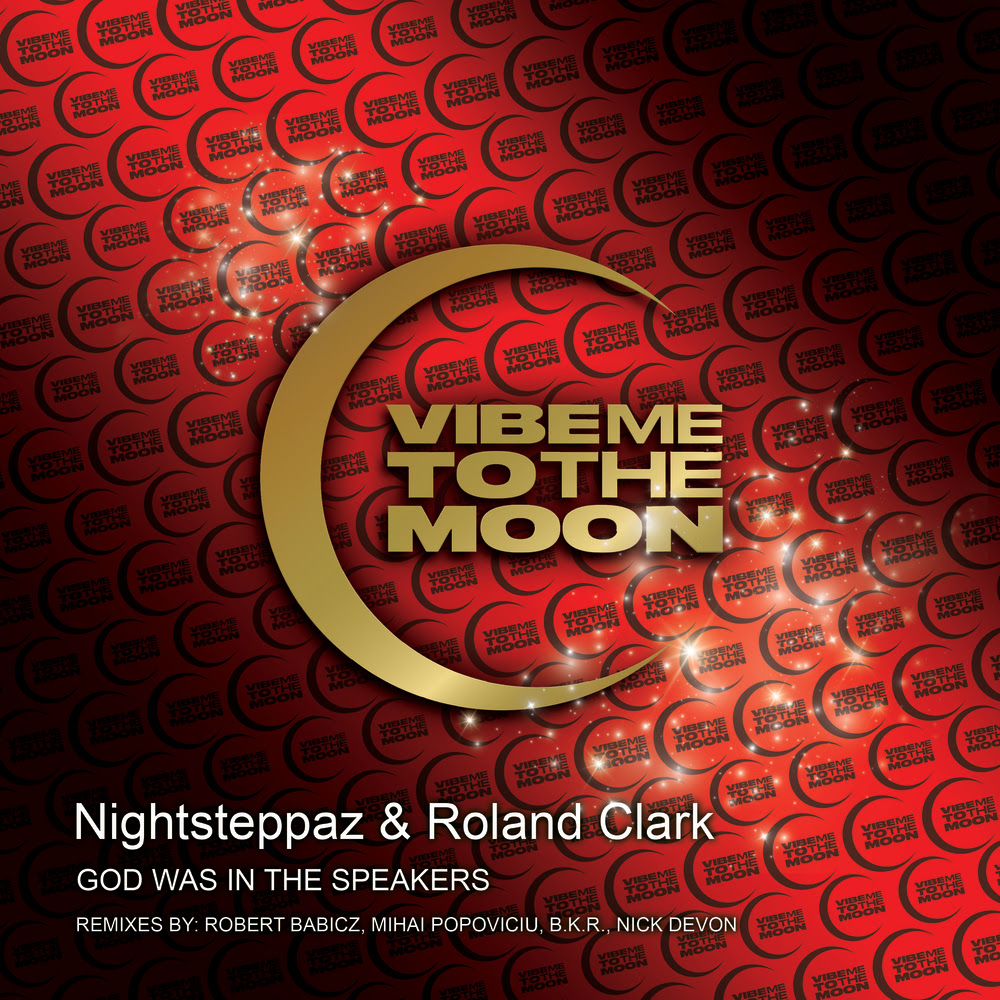 After recently delivering Joeski’s standout Rude Boy / Stick Up! EP earlier this month, Vibe Me To The Moon continues its release schedule in July with a collaboration between imprint-head Nightsteppaz and American talent Roland Clark. God Was In The Speakers includes four remixes courtesy of Robert Babicz, Mihai Popoviciu, B.K.R and Nick Devon.

“While out partying on King’s Day in Amsterdam, I heard a DJ playing some minimal house in front of an absolutely MASSIVE crowd, and I ran back to my studio with fresh beats in my head, which was the birth of God Was In The Speakers. I’m very excited to finally release this one to the world as my first of several releases this year.” – Nightsteppaz.

The original leads, manifesting as a tech-driven dancefloor cut. Echoing vocals reside next to chunky kick-hat combos before Robert Babicz gives us a progressive-leaning remix in his signature, hard-hitting style. Mihai Popoviciu takes us down a minimal route via stripped-back synths and looping, low-slung percussion, whilst B.K.R ups the ante thanks to a powerful lead bassline. Nick Devon rounds off proceedings on a melodically-charged note, forming a main-room classic that feels emotive and danceable throughout.

Nightsteppaz is a US-based DJ, producer and head of Vibe Me To The Moon, a label that has championed Joeski and Roland Clark in recent times with plenty more in the pipeline for 2022. Roland Clark can be considered a seminal artist in the development of house music as we know it today, having collaborated with the likes of Armand Van Helden on Flowers to Fatboy Slim on Star 69 (What The F**k). Robert Babicz has remained a staple artist in electronic music for nearly three decades, honing his production craft on Marc Romboy’s Systematic whilst running his own label Babiczstyle. Mihai Popoviciu is a mainstay of Romania’s minimal scene, with releases on Berg Audio, TBX Records as well as his own Cyclic Records. Simon Baker AKA B.K.R has found a welcome home on Drumcode, Last Night On Earth and 17 Steps over the years, to name just a few of the imprints he’s released on. Nick Devon has been active on the circuit for over two decades, becoming a stalwart of melodic techno in recent times thanks to acclaimed releases on Steyoyoke Recordings.

Nightsteppaz & Roland Clark ‘God Was In The Speakers’ is OUT NOW on Vibe Me To The Moon
Buy it here: https://www.beatport.com/release/god-was-in-the-speakers/3798044