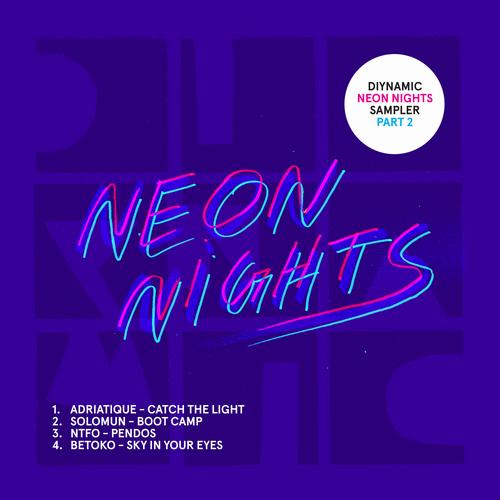 [Release] Diynamic is a well respected for their years of consistently solid sound and amazing releases. This is the 2nd part of the Diynamic Neon Night Sampler, and it is nothing short of superb. Groovy, sexy and deep! Featuring a loaded little lineup of Adriatique, Solomun, NTFO, and Betoko.

With their opener ‘Cash the Light’ Adriatique shows that they definitely know how to master the blend of different sounds and elements within their music. Starting with acid sounds and deep tunes, the track suddenly changes into an extremely cool and groovy mood, as the impulsive vocals join in. Adding the simple, but effective bass line, they created a sound, you’ll have stuck in your head for a very long time! The the second track by Solomun, starts off in a very dark and severe way, melancholic long and short string tunes alternate until they merge into a dramatic climax, while the catchy bass steadily forces you to move your feet.

‘Pendos’ is a very deep and groovy track. Dominant percussions and a low-bass build the base, to which NTFO added blurred voices and a haunting police siren, that creeps directly under your skin. A deep atmosphere arises and captures you until the end of the track. Hearing the cosmic-disco sound that defines Betokos track ‘Sky in your Eyes’, you feel like you are drifting into space. Gripping, atmospheric sounds seem to surround you from everywhere. From time to time melodic vocals appear, so soft that they perfectly underline the spacious mood.

As always, an amazing release from Diynamic with an all-star linup.