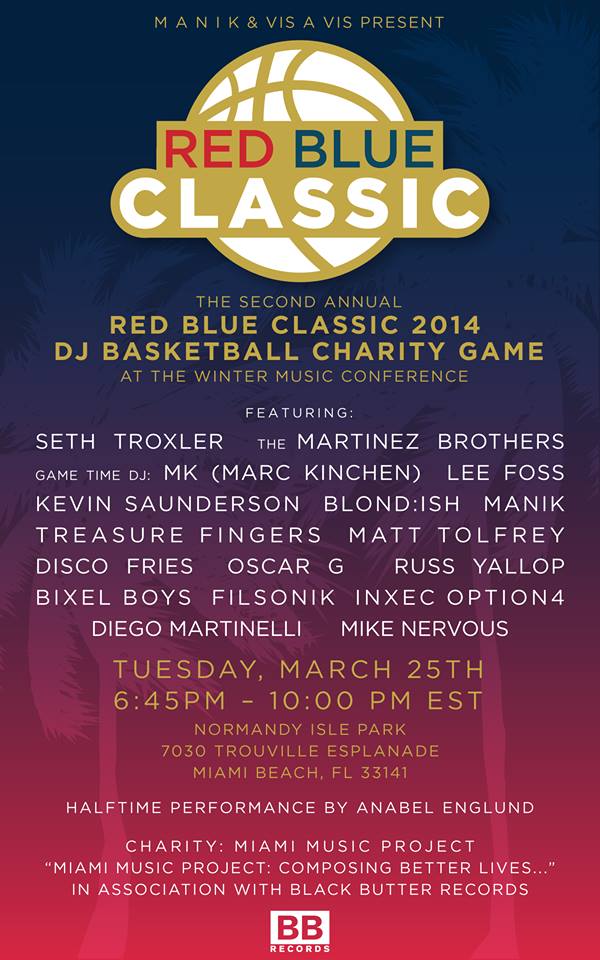 Miami time is fast approaching, and one of our favorite events to attend is the Red Blue Classic DJ Basketball Charity Game where we watch some of the hottest acts today show their skills off the decks and on the court!  New York based producer & DJ Chris Manik will be hosting the tournament for its 2nd year running and has pulled players such as Seth Troxler, Lee Foss, Kevin Saunderson, The Martinez Brothers and more to tap into that competitive spirit and help support a wonderful cause.  Dubmaster MK will be providing the beats and songstress Anabel Englund is set to put on a lively halftime performance that should keep the energy level on the up.

We picked Manik’s brain a bit about how it all started, the Miami Music Project, and his recommendations for some special WMC functions-take a peek!

1.  I think it is an awesome concept to get such well known artists involved on the court & off the decks!  How did the idea come about and what inspired you to piece it all together?

Thanks, yeah it’s a lot of fun. A little over a year ago I had this idea with my sister, to do something that involved basketball and DJs playing for charity. A lot of the American acts ball, so it just needed to happen when most of us were all in town at the same time. Miami and WMC has given us that city and time- it’s a good way of doing something positive and giving back.

2.  Tell us a bit about the Miami Music Project and why you value supporting them this year.

They’re a fantastic organization that provides an opportunity for their kids to get involved in music and learn to play an instrument and just surround themselves in music. As artists/djs/producers, music is the centerpiece to our lives. So working with this charity for 2014 made total sense.

3.  I also see that you are working in association with Black Butter Records, how did you begin to collaborate with them and do you work with any other groups as well?

Black Butter is a phenomenal label and I’m glad to be apart of that crew. They reached out to do a remix in the spring of 2013. We hit it off and I’ve played a couple of their parties in the UK. I am also playing their room at Treehouse during WMC on March 27th.
I have my debut EP coming in mid April…I am excited for that one. And most people know me for my music on Ovum and Culprit- both of which I have EPs coming this summer on. I’ve also had stuff on Hot Creations and Moda Black.

4.  You manage to pull so many talented artists, both this year and last.  Has anyone really impressed you with their skills on the court?

Viv of Blond:ish really has impressed me. Thankfully she’s on my team this year. She always brings it. Big Oscar G is a beast down low and Russ Yallop really gives you 100% on the court. Those 3 in particular have made noise.

5. I hear Miss Anabel Englund will be taking over for half time! Is the game itself more musical than your average match?

Yes it is as we have a game time DJ, and we bring in some sound. MK is spinning this year and then Anabel is going to sing something for halftime. We’re thinking Super Bowl style minus the light show? ;]

6. Did any particular facet surprise you during Red/Blue’s first run?  What are you most looking forward to as the 25th approaches?

I guess that it was a really competitive game. I knew the artists would get into it but I didn’t know they would get that serious at times haha. We were tied at the end and had to go to extra time so it got heated in the final 3 minutes. I’m just looking forward to seeing everyone and raising some money for MMP, all while bringing awareness to what the Red Blue classic does as we continue to grow. Hopefully next year the game will be even bigger!

7.  Any musical events you recommend checking out for the lucky souls heading down south this season?

There are some dope events happening that week. DJ Mag runs their day time stuff- those line ups are fun. Tuesday night The Pickle has a solid line up going- some of us are going there after the RBC Charity Game. Treehouse has a week of ridiculous line ups from Apollonia to Heidi’s Jackathon. I’m playing there on Thursday night for Ovum VS Black Butter. Anjunadeep pool party Saturday looks great and then Last Resort is going to be cool to end the week.