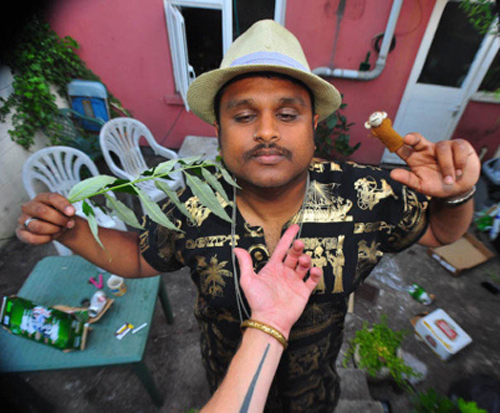 [Promoter Profile] The omnipresent, the all-knowing, the great and powerful man of the party, the promoter. When you’re in the business of parties, it’s never an easy task, at times even daunting; but the rewards are vast and lucrative, and all the tedious planning and organization; the mind numbing hours of creative brainstorming; the constant stream of networking; the frustration of endless troubleshooting, problem solving, and decision making; dealing with all the last minute “Is there a list?” people (you know who you are) while running amok around town preparing for the big event; all of these elements vanish away with the vibration of the dance floor when you’re in the middle of something that you created. That feeling of accomplishment is unparalleled.

We first discovered Rag Satguru aka Rag Amuffin when he was featured on Resident Advisor’s first “Real Scenes” video back in July. The video is a tribute to the thriving party scene in Bristol. A testament that all it takes is love and support for one another to sustain a unique and fruitful existence. Rag is one of the founders of Motion, promoter for Just Jack, and is working on his new project Love Saves the Day, a new summer festival in Bristol. Rag is a key component in the prevalent music world of Bristol and we’re proud to deliver this interview with him. Pay attention to the man behind the curtain Lovers.

Tell us about your upbringing; and how it has influenced you, the parties you throw, and the music you love?

I moved schools a reasonable amount growing up, which gave me the ability to meet new people easily and fit into new situations. It definitely helped to open my mind musically hanging out different people and making new friends with varied music tastes every few years.

At what moment did you realize that throwing parties is what you wanted to do?

We threw the first parties at Motion (before it became a club) in 2006, turning the café area and the outdoor terrace of the skate park into a summer rave. We didn’t tell anyone where it was, picked them up by boat in the centre of town and dropped them off round the corner from Motion and led them into the space. Everyone had such an amazing time, a lot of the older party crews ears picked up and took notice of what we were doing. That’s when I realized I could do this for a living…

Give us details about your first event. Was it a success? What lessons did you learn?

The first event I ever put on was a boarding-house disco at my school in Shropshire. We invited the girls from the next-door school and I managed to get the gap-year students to run our free bar. The party was insane – someone pissed in the fish tank!

Describe the music scene in Bristol. Does having such an abundance of great talent in Bristol make it easier or more difficult to brand a unique party?

The music scene in Bristol has been constantly bubbling for many years. The variation is in the sounds at its heart. When I fist moved here drum & bass was prevalent, people used to look at you funny if you were into house music. Next came dub-step, which hit us with a bang and instilled the city with a massive burst of creativity. Acts like Pinch, Appleblim, Al-tourettes & DJ October helped this sound cross over to 4/4. The abundance of talent in the 4/4 scene here will help us carry this through for many years to come. You may already have heard about; Eats Everything, Waifs & Strays, Julio Bashmore plus Behling & Simpson, but still to pop out of here are Christophe, Lukas, Freddie Prest & Tom Rio. I’m hearing the records they are making daily. The talent and the crew coming out of this city is amazing, long may it live.

How did you get involved with In:Motion? What are your roles? Tell us about this upcoming season and which artists you’re most excited about.

In 2006 Amos (Waifs & Strays) and I did the first ever parties at Motion. Moving on to 2007 Just Jack put on the first ‘Ramp Raves’ in the skatepark. 2008 saw the full license of the club and the addition of Tom Paine (festival extraordinaire) to Motion. Running into 2010 four of us got together and agreed to programme the nightclub together to get the best out of the DJs and the run of dates when everyone comes back to England from festivals and Ibiza.

Tell us about your aspirations and what is on the horizon for Rag and Bristol.

During 2011 I will be taking a step back from promoting, I will carry on booking DJs and am doing this for a few festivals in the summer. Alongside this I am starting an artist management company with Ed Karney. I’ll be working closely with Eats Everything & Subb-an.

What advice would you give to an aspiring promoter?

It’s all about having a really big group of mates who want to go to something different than what is already going on. Fill the gaps in the market and put on quality events.