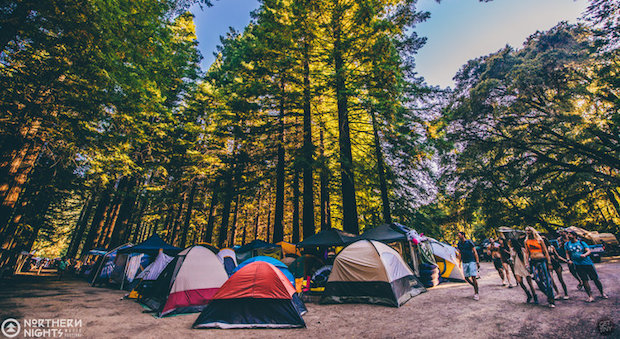 Nestled in The Emerald Triangle between Humboldt and Mendocino counties in Northern California, Northern Nights is a small and intimate festival that takes place under the magnificent Redwood trees. The Eel River plays home to afternoon swims and beachside dance parties at Cook’s Valley Campground.

Aerialists will swing through the air while dancers will flow throughout. Music will include hip hop from Living Legends and indie electro producer Jai Wolf as well as the bass ridden G Jones, Southern funk duo Cherub, and Big Wild. Moon Boots will also perform an all-night set and Justin Jay will take everyone on a Fantastic Voyage.

Northern Nights will consist of multiple areas including the Grove featuring Yoga classes as well as burlesques, and all-night performances. The west coast’s largest silent disco, the fun field, a hammock lounge, and local farm-to-fest organic food vendors will join forces in the Ultimate Farmer’s Market.

A Cannabis friendly zone will also be present for those that have their med cards. This environment will be newly expanded and include workshops as well as local and global arts and craft vendors.

Northern Nights is in it’s 5th year running and will take place over the course of three days. The music festival contains Art, Music, Food, and local culture and will occur between July 14th, 2017 and July 16th, 2017. The Eel River also served as a home to festivals such as Jerry Garcia’s Electric on the Eel as well as Reggae on the River.