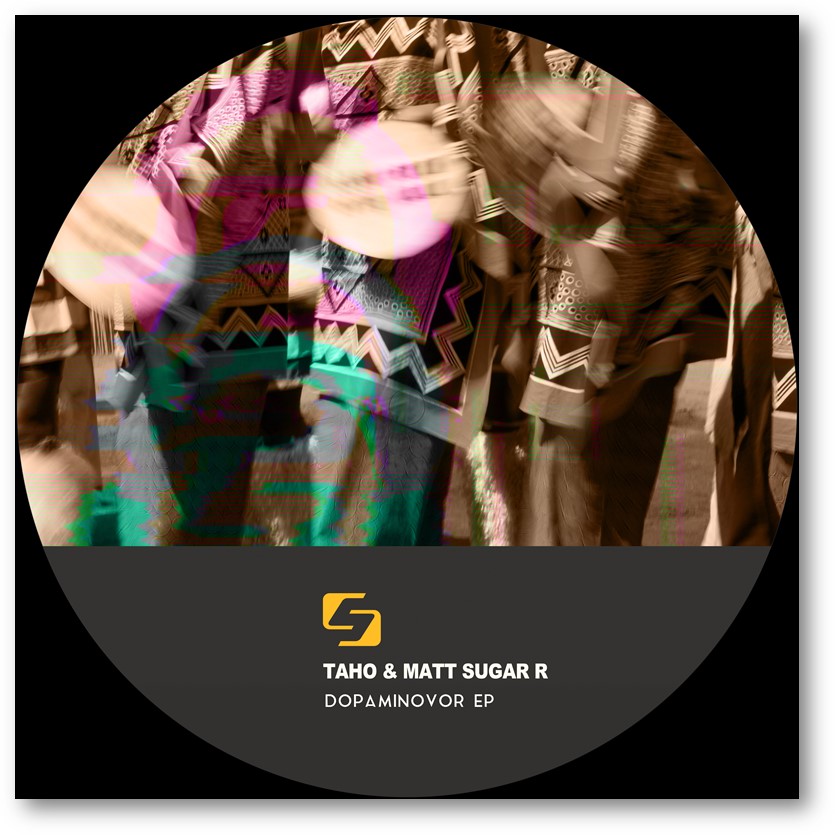 Fresh new label Sugar Tape has its roots in France but is firmly based in the UK. The label was founded by Frenchman Matt Sugar R with a noise policy that ranges from House to Deep House, to Deep warm Techno that will be released on shiny black plastic only.

Matt Sugar R held a weekly radio spot  – Warm Underground Sessions – on Belgium’s Warm FM to a resolute 30k reach, with a guest roster to impress that included Chez Damier, Dimitri Kneppers, Thomas Barnett and Satoshi Fumi.   Sugar has released on Thomas Barnett’s Detroit label Visillusion, and he has remixed for F.E.M in collaboration with William Masson. On this release he joins forces with legendary French producer, David Jacopin aka Taho. Dropping his first two records on Lauren Garnier’s F Communications when he was just nineteen,  Taho moved on to further greatness on Kevin Saunderson’s KMS, Josh Wink’s Ovum, and Delsin. The result of this seasoned pairing is the ‘Dopaminovor EP’ 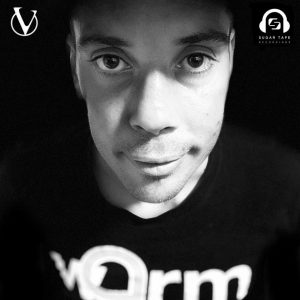 Thanks for talking to us today. It’s a pleasure to meet you.Can you introduce yourself to our readers?

I’m Mathieu Vidot alias Matt Sugar R. I have been passionate about electronic music since 1998 when I bought my first turntables. I’m a big fan of House music and Techno influenced by the Chicago, New York, and Detroit. I started producing in 2019.During the summer of 2020 I signed my first EP ‘Seein’U’ on Thomas Barnett’s Detroit label ‘Visillusion’. I also did a remix for F.E.M in collaboration with William Masson released on EP Digital Music. Together with William I have released another track ´Jazz Inside’ on his label ´Naropa Music‘. I have just created my own label ´Sugar Tape Recordings ‘ based in UK. ´Dopaminovor EP ‘in collaboration with Taho is the first release of the label. With Taho we are in preparation for the 2nd release which should be beginning of 2022.

Where is it, you’re from and where are you based?

I am French from Reunion Island. I have always been moved by the folk music of Reunion Island with its frenzied rhythms which are influenced by African, as well as many other ethnic mixtures. I’m in Bury St Edmunds near London, I have been in England for 4 years.

How long have you been making music? What was your first release?

I started mixing very early. I was about 16 years old, but I started making music late. I have been creating electronic music for about 3 years. My first release was a remix for William Masson on his label Naropa. It was a basic and simple remix. It was thanks to William that I started producing electronic music. I then signed my first EP ´Seein’U’ on “Visillusion” with Thomas Barnett and Taho as a remixer.

I thank Thomas for trusting me. I’m so proud to have been able to sign his label. Thomas Barnett is one of the real ‘authentic’ Detroit ‘Techno pioneers.

Who were the artists and DJ’s you were listening to growing up?

The first artist I discovered and who blew my mind for the first time on a dancefloor is ´Jack de Marseille.’ It was in 1998. It’s the first time I’ve listened to Techno music. I was listening to a lot of French raps at that time, with artists like ‘I am,’ ‘Funky Family’,’NTM’. I was fortunate at that time to have a famous club right next to me called ´4 Sans’. This was where I got to taste House and Techno culture. I had saw some of the  best artists at that moment like Laurent Garnier, Jeff Mills, Derrick May, Sven Vath, DJ Bone, Moodyman, Carl Cox, Rolando, Carl Craig, CJ Macintosh, John Thomas, Robert Hood, Heiko Laux , Manu le Malin, Deetron. At that time, the DJs were doing live performances and were able to play for 8 hours at a time with vinyl only.

Who are the DJ’s and producers that inspire your style of production today?

Jeff mills was amazing when he played on 3 turntables, it was amazing how fast he played. It was going in all directions, it was alive. Derrick May influenced me a lot, his  DJ sets are always incredibly powerful and full of energy. He’s my favorite DJ, he really has incredible energy on a dance floor, and I still love his selections. Deetron, Laurent Garnier and DJ Bone have also influenced me a lot. These DJs know how to mix house music, disco, and techno. Laurent Garnier also plays drum and bass in these sets; you never get bored. Louie Vega and Kenny Dope aka Master at Work have influenced me a lot too, I’m a big fan of Joe Claussell, this guy is a wizard, that music is so spiritual and mesmerizing wow. He puts out a huge energy on  the dancefloor. And also, Chez Damier, who made me love House music with his timeless track’ Can you feel it.’ On the French scene

like Taho who blew my mind with his track “Jazzy J” signed on’ F.COM ´ in 1995 .Tevatron, DJ Deep, DJ Gregory, Phil Weeks, Dimitri from Paris.

Dave lee is amazing too. A label that inspired me a lot is the Chicago label ‘Moody Recordings.’

What producers are you locked into at the moment?

Dave Lee is a producer that I have been following from the start and still listen to. I really like the work he does on his label Z Records. Currently I still play productions from Chez Damier ,Blaze, Kerri Chandler ,Dennis Ferrer , Louie Vega, David Morales. Delano Smith, I also love Norm Talley’s productions. There are some very good French producers that I am currently like Theobald Ringer, G-Prod, Jules Wells, William Masson. without forgetting Taho and Tevatron that I always follow …sorry for all the French artists that I forgot, there are many.

You are working with techno legend, Taho on this release. Tell us about your relationship?

It was a wonderful meeting. I was a huge fan of Taho. I played his tracks a lot. Taho is a musical genius, he is above a lot of artists to me, everything he does is beautiful. I met him thanks to William Masson who introduced us. I had a radio show on Belgium’s ‘Warm FM,’ and I invited Taho. We have kept in touch since that day, he has performed several times on my show. When I did my first track ‘ Seein’U  for Thomas Barnett, it was Taho who did the mixing and mastering. He liked the energy of the track and he offered to do some tracks in collaboration with him. Taho is for me a producer who stands out from the crowd. The Dopaminovor EP is our first collaboration. Taho and me have a lot of energy, that’s why we get along well.

How did the production process flow with you both in different countries?

We exchanged the stems and I just set my drum tracks to Taho, and he soaked up my energy and added his synths. Taho is a wizard, I’m not kidding, you send him leads, he connects to you then he makes you the song of your dreams. I swear he is incredible … that’s how Dopaminovor EP was born. I  didn’t do much, I just sent him my own drum tracks and he did the rest.

Taho and I were talking about today’s world. People are addicted to dopamine through social media and consumption. We were just laughing and Taho said people are just “Dopaminovors.”

Talk us through the EP a little.

We finished ‘Funky Boogie’ last year. We were supposed to release it in 2020 but it wasn’t a good time with COVID. Finally, we waited and before this summer I contacted Taho, I told him that I wanted to release Funky Boogie and that it was the moment. We had started Dopaminovor and had put it aside… the elements were ready, but the track was not built. Taho calls me and he says ´wait I will finish the construction.’ He sends me the built track 20 minutes later. Dopaminovor was born and when I listened to it fully, I found it incredible .

The tracks are both quite different in style. What was the thinking behind having two such different tracks together?

We had no idea, we let ourselves be carried away by the vibes of the moment and the result was we made these two tracks. We never prepared or calculated anything, we worked instinctively

What do you think are the ingredients that make a great record?

For me there isn’t miracle recipe. It all depends on the energy of the moment, the state of mind of the audience. A track can move a dancefloor and give emotion one day and another day it may not work. It all depends on the mood of the moment and the state of mind of the dancers. But to answer your question the perfect track will be the one you put on at the right time and which will know how to diffuse the energy you need at that moment

Care to take a stab at one of the best house records of all time?

A track that drives me completely crazy is’ French Kiss’  by Lil Louis.

Is there a perfect track that you wish you had made? And What is it?

´French Kiss’ by Lil’ Louis. For me in a track what is important is the energy it gives and that it transmits. A lot of producers make very technical tracks that don’t diffuse any energy. Keeping it simple and authentic is very important.

As a DJ, how do you source new music?

I get a lot of promos. When I have time, I go to the record store. I like to search on Bandcamp.

If someone wanted to get to know you, what album would be a good indicator of your personality?

A cocktail of waves and positive energy.

When you’re not making music, what do you like to do?

When I am not working, I train intensively in boxing. I have been boxing since I was a teen, its my first passion, it’s a way of life for me.

What other releases should we look out for from you?

I haven’t released a lot yet. Here is the remix for F.E.M that I made in collaboration with William Masson. I think this track is amazing. I am really proud of this collaboration. It’s an incredible mix of House and Techno. We can feel in this track my House influences and William’s techno influences. Listen to this and tell me what you think

Thank you so much for your time!

It was a pleasure, thanks for the invitation. 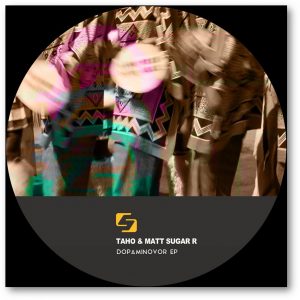