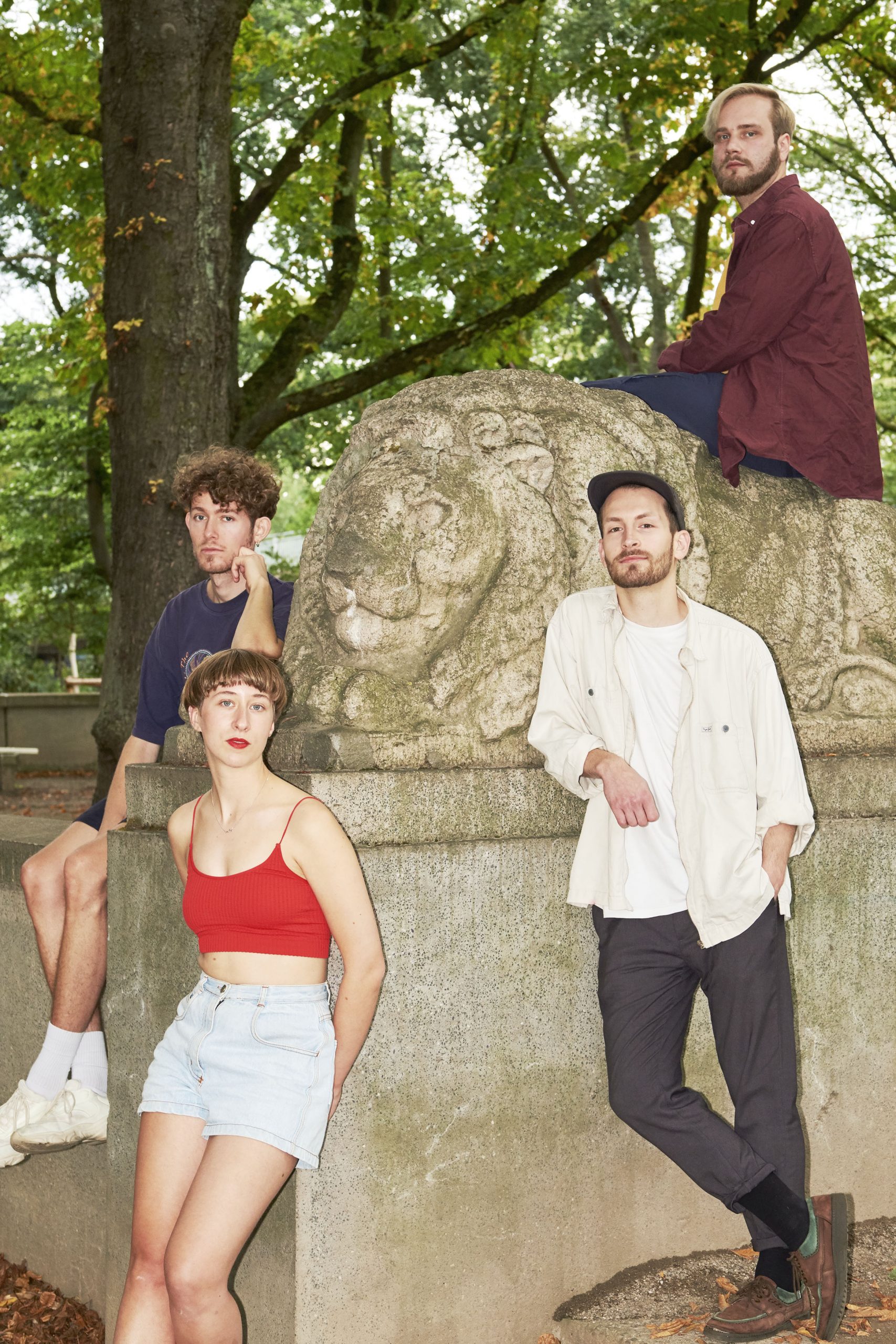 First up to bat, German beatsmith Hulk Hodn fires up the MPC and chops ‘Tom’s Garage’ into a hazy, head nodder before South London’s Footshooter takes ‘Into The Blue’ through a synth heavy whirlwind of broken beat grooves.
On the flip, and fresh off the back of his Dekmantel release, Frits Wentink stamps his idiosyncratic expertise on ‘Pose’ for a walking bass bubbler. Closing out proceedings, Velour’s very own Vinzent Wirth, under the moniker 20/100, reworks ‘Luminate’ into a Detroit influenced, jazz tinged, sunset house gem. 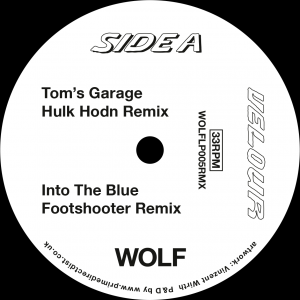 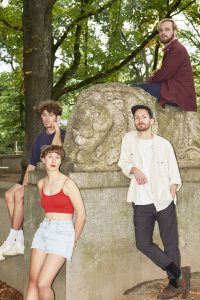 Thank you for taking the time to talk to us. Please introduce Velour to our readers. Hey guys, thanks for having us. We are a four piece band from Essen and we make some post-genre, jazzy, neo soul, broken beat kind of thing.

Where are you from? Where are you based? As a band we are based in Essen, a city deep in the west of Germany.

How is the mood where you are? Is it starting to relax? Are you able to go outside and mix? Since a couple of weeks, the situation in Germany became much better. So it’s possible to hang out again and to make music. So having some kind of normal summer. Except big festivals and events though.

How long have Velour been together? Who are all the members and what are their parts in the band? How did you connect? Our band exists since 2018. We are Eva (vocals, keys), Vinzent (Sax, Synths, Keyboards), Fabian (bass) and Janik (drums, percussion). We all grew up in different cities like Berlin and smaller cities in the west and mid of Germany. Three of us, (Eva, Vinzent and Janik) met at the university of arts in Essen, were we studied photography and design. Through that we started to make music together. Fortunately we found Fabian as a bass player, who completed our band.

How would you describe your sound? What other artists do you stand by/ are alike to? Our sound is influenced by various kinds of music. Like Dilla beats, his legacy and the artists associated with that. The sound of the new jazz scene especially from London. Both are connected by the influence of drum machines and sampling on live musicians. And a lot of left field (jazz) music from all around the world. These examples formed our taste in rhythm, structure, and harmony. But there is one aspect in our music we can’t really describe, which is the affinity for undiscussed and free, open spaces in our music which may imply this kind of Kraut thing in our sound. Though we don’t know exactly how to rate or characterize this impact, since we are too much involved.

I heard a few years ago that Berlin was the new ‘Melbourne,’- That in Germany, the new school of jazz was bubbling. Why do think the German scene has taken so well to experimental jazz and broken beat? Do you think it’s a back lash to techno? We guess you can recognize the influence of Melbourne all over the world. When we listened to Relaén for the first time, we noticed that Melbourne had an impact to German bands too. They are also connected to a small but important circle of German Hip Hop Producers, like Hulk Hodn f.ex. Maybe you can put that scene in relation to some of the new Jazz stuff, but it’s just a vague assumption. (Experimental) Jazz in Germany has its special history (if you think of ECM f.ex.) but we always find amazing new stuff from all over the country especially because we are kind of self taught and new to the scene ourselves. We’re not that familiar with techno to come up with an educated guess but the experience of consuming Jazz and Techno are just too different to stand in a conflict with each other. The scenes move parallel and shouldn’t worry loosing their members.

You dropped your self-titled debut album on Wolf at the end of 2020. Nine tracks that lift the listener up above the madness of last year. Was that your intention? Not really. All the tracks are originated in the years before 2020. But we understand that you can interpret it in that way. The album has a dreamlike, escapist mood, which we only just noticed at the end of the working process.

Is there a process that you follow when you start on a new track? How does it begin? We don’t have a completely consistent way to write a new track. But we are jamming a lot in a group of four or in smaller constellations. Often someone has an abstract idea in mind, which could be a beat, some chords or just a short line. But we don’t talk much about it at the beginning. We make rough records of those jams and elaborate the best parts and elements after that.

How would you say you know when a track is finished? When everyone found his role in it. But it’s always in process. We work it out for a record and there it’s captured. But not completely, because all around and after a track always transforms through the time, especially on stage. So, it’s very vivid and never really finished in a way.

Wolf artist – Mr Fries was involved on the album. What part did he play? We produced the album with him, and he showed us a lot about how to capture the vibe and the essence of our sound. He also helped us in discovering what’s possible technology wise. Fries also mixed the whole record with us. So, his knowledge, bunch of skills and patience were particularly important during the process.

With a sound that’s a blend of broken, hip hop and neo soul, who are the artists that inspire you? The Soulquarians, Hiatus Kaiyote, BadBadNotGood, Yussef Kamaal. Just to name a few popular ones.

Your first single ‘Pose’ also featured Mr Fries. Is that where the Wolf connection came into play? Were you familiar with the label before? Yes! We already knew Mr Fries a bit before we worked with him. Or at least his music, because of a similar circle of friends, which also includes Hodini (Hulk Hodn). Same as we knew the music of some other artists of the label like Frits Wentink. And so, we knew about Wolf from that, even though we studied the label much more since our collaboration.

In a world of super star DJs and online profiles, do you think it’s tough to break out as a band? Well, generally it might be a bit tough. It can be easier to make music as a solo artist when it comes to musical decisions, the workflow, and so on. Especially in this fast-moving music industry. And even more since it’s much easier to make music just on a DAW. But it also really depends on the music. It doesn’t have a great impact on us, individually and as a band. Maybe the admission to make music with multiple people becomes less relevant when it’s more niche music or at least if it doesn’t claim to be heard by everyone.

What are some of the challenges you have faced in the industry? We think for us it was a big challenge to release our first record in lockdown times. Generally, we love to be around people, and we really missed the direct feedback, especially in the time around our album release last autumn. To play live gigs and to celebrate our release.

If you could change something about the music industry, what would it be? Definitely more diversity in the music industry in every sense. Which also implies the institutional and structural part of the industry so the decision-makers. And more awareness and acknowledgment about the origins of music styles and genres, which is strongly intertwined with the first point. For us as a band it’s a blessing to have musical inspiration from such a variety of cultural backgrounds. With a look at the streaming platforms, we wish that smaller artists and labels get the same revenue for a stream like famous acts.

Wolf are known for breaking new artists. Was it a conscious decision to work with a label that is into the development of its artists as much as selling records? Yes, definitely!

Do you feel a little protective over your songs ahead of a remix? Absolutely not. For us it’s an honour to be remixed and sampled.

Some heavyweight talent on this ‘Remixed’ Ep. We are showcasing Hulk Hodn’s rework of ‘Tom’s Garage.’ Tell us about the original and what the German beatsmith has done on it? The original idea of Tom’s Garage was the result of a hazy duo session of Fabian and Janik during our album process. And the process was a bit weird and very associative because we also switched instruments at some points and Eva recounted some little loose tale over it. At the end, Vinzent flipped this last short skit of the song at the MPC. So, the track got this fragmentary character. It wasn’t a surprise for some of us, that Hulk Hodn choose this one for a remix after Vinzent did that thing with the MPC. The track is really predestined for an Hodn remix since it has many ingredients in store that you can sample and chop up in a Hip Hop track. Like the vocals or the intro chords which he flipped tastefully in his remix!

The sonics are stunning of the Footshooter rework of ‘Into the Blue’. Sounds like Four Hero. Do you have fave remix on this collection? No we really love all of them! We also love that it’s a really varied selection, so very different types of remixes. We are very hyped and grateful to have them on this EP.

Are there some artists that you would like to collaborate with? We enjoy to work with each other in this band and we got the feel that there is still a lot to discover. If we come to a point where we need to have some new additional sounds and instruments in our tracks, we would love to collaborate with other artists for sure! But at this moment we don’t have specific artists in mind. Being remixed is always a beautiful way of collaborating too.

I’m sure there’s a lot of people would love to see you live. Are there plans for live and festival gigs, pandemic permitting? Yes, we gonna play a few open-air gigs this summer in Germany, which we will announce very soon. Hopefully, we can play much more gigs in 2022 and in the UK!

Do you have other release projects in the pipeline that we should look out for? Not directly but we started to work on new music since a couple of weeks. So it’s in progress!

Is there anything else you’d like to tell us about Velour? Back in childhood, Eva was a German dubbing voice in a Power Rangers episode