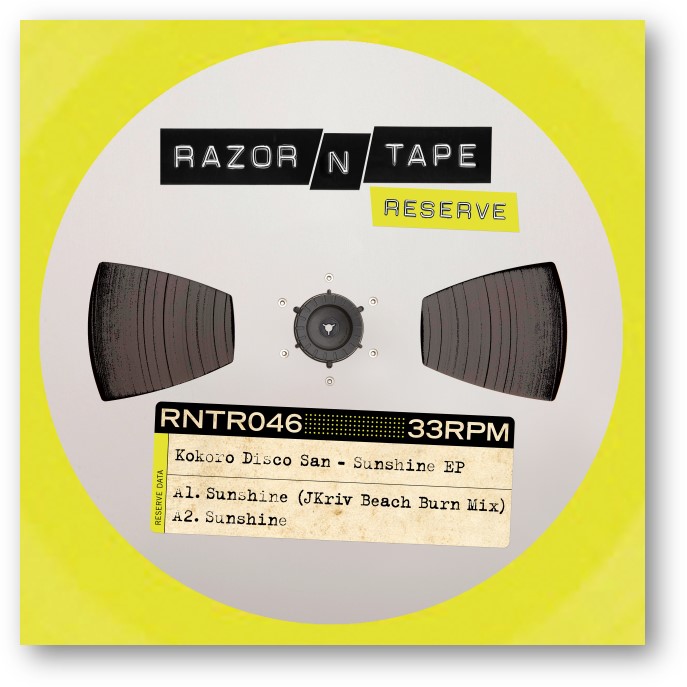 A collective of musicians devoted to walking the blurred lines that divide disco, funk, boogie and house, Kokoro Disco San first appeared on the Razor-N-Tape radar with their 2019 ‘Isla Fantasia’ release on Rocafort Records.

KDS now brings their uncanny ability to capture the mood and instrumentation of classic disco and soul with the uplifting summer anthem ‘Sunshine’ and the Candido-esque sonic journey ‘Jungle Deep’.  Rounding out the EP are two remixes of the title track by label co-head JKriv, who delivers an extended acidic exploration with his ‘Beach Burn Mix’, and a bumped up yet loving treatment of the original song with his ‘SPF76 Mix’. 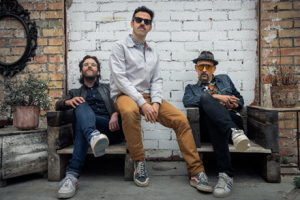 Kokoro Disco San is a new name to us. What can you tell our readers about you guys?

We’re Lalo, Thompson and Miguelito (the one writing this), three guys from Barcelona with a long career in music. Thompson has worked as a music journalist, DJ and producer (though he also plays bass with garage rock bands). Lalo and I are friends since high school and have spent 26 years playing together in Fundación Tony Manero, a 10 piece disco-funk band. I met Thompson while DJing together and in a very organic way we started doing stuff together then we got Lalo involved. Suddenly we found ourselves with a label (Rocafort Records) asking to put out a 12” of our stuff. We like disco and funk but also enjoy a good pumping beat. Maybe because we live by the Mediterranean our output has been labelled many times as Balearic.

You are all in the beautiful Spanish city of Barcelona, right? How is the mood in your city right now with everything that has gone on in the world?

Barcelona is a very nice small city. We enjoy living here as it is a meeting point for people from over the world, and I’m not talking of tourists (although we have plenty of them) but people who come here to settle down because of the weather and the vibe of the city. Now that everything seems more or less back to normal, people have gone out to the streets as (so goes the Spanish saying) if they didn’t have a home.

What are the different parts that make up the music scene in Barcelona, and where do you guys sit within the scene?

Barcelona (actually all Spain) has always been more a rock and pop place than a dance music place. Of course, we have Sonar and a lot of clubs but they’re mostly techno and indie focused. There’s also room for house, but not much for the organic kind we enjoy. Actually, most of the attempts in that direction have failed. So, finally we find ourselves constricted to the ”groove music scene” so to speak, which is cool for us even if it’s a small scene.

We love Disco here. Your sound and your moniker is so Disco! What do you think are 3 of the most important Disco records of all time?

Important is a very big word and it’s always hard to face such a selection so we’ve used two different approaches: historical importance and personal importance.

From the historical point of view, Lalo’s choice is Chic’s evergreen “Good Times”, Thompson goes for Donna Summer and Giorgio Moroder’s epic “I Feel Love” and I choose one of the foundational tracks of disco music, MFSB’s “Love Is The Message”.

From the personal side Lalo is emotionally attached to Oliver Cheatham’s “Get Down Saturday Night”, Thompson leans towards a Paradise Garage classic, Taana Gardner’s “When You Touch Me” and my choice is “Stop Bajon (Primavera)” by Tullio de Piscopo, just to put something exotic in there!

As a studio trio, who plays what part in the Kokoro Disco San studio?

Thompson gives the electronic approach; he’s used to work with Ableton and most of the times he brings the first ideas to the table. Lalo is the musician, he’s a guitar player but also proficient on bass and keyboards so he usually takes Thompson’s idea and makes it better from a musical point of view (harmonies, melodies, extra instrumentation). Finally, I’m the guy who answers interviews. Just kidding! I’m in charge of sound design and mixing. Of course, we all share ideas and opinions in all the process.

What are the most important pieces of kit in the KDS studio?

We have a lot of gear in Nación Funk which is the studio I run.  feel that particularly important to the KDS sound are the monophonic analogue synths which we always use for the melodies (Moog Prodigy, Arp Odissey, Yamaha CS01) and also the polyphonic ones which we like to use for the pads (Roland JX8P, Roland Juno Alpha 2) or pianos (Yamaha DX7, Wurlitzer 200A). We also have some nice drums machines as well as assorted percussion which is always handy to help create a beat with some personality. Of course, we also have Lalo’s guitars and our beloved Roland Jazz Chorus that gives us the clean and funky guitar sound we love (although lately we’ve been getting super nice results recording guitars direct to the preamp, without and amplifier… but I don’t want to get too gear nerd here…)

Tell us how the beautiful track – Sunshine – born?

We started working on it two days before the lockdown started. I think it was a Thompson idea and we did a first session together in the studio. Then hell broke loose, and we were all locked down. After some days we started working back on the track, sending tracks and ideas back and forth. I’d sneaked in on my own to the studio to put them all together. Once the tune had taken a shape, we were happy with we felt the track needed a couple of improvements, one was the piano which we felt needed a more organic feel to it, and the other one was a vocal hook we were using on the verse but weren’t too convinced about. Enter Manuel Dabove and Clara Gispert, both very good friends of us, living together, locked down and -as most of musicians were at that point- dying to find something to do during the long locked down hours. We sent them the tracks and they delivered awesome performances bringing the track to life. Clara also wrote the vocal part for the chorus giving the track the extra icing on the cake it was missing.

How did you hook up with Brooklyn’s finest, RNT?

Well, I just sent an email with some soundcloud links. They had already heard our 12” on Rocafort and quickly jumped on the tracks. It was so quick and easy it was hard to believe…

If you had to say that this record is for lovers of… what other artists or records who you say ‘Sunshine’ sits with?

I’d say this record could be appealing to lovers of the old disco and the nu disco sound alike. Because of the different versions of the track, it can serve different purposes or moods. It could sit next to some Dimitri From Paris re-edit or a Kon production but also could be played in a set with Candido’s “Thousand Finger’s Man” or Crown Heights Affair’s “Galaxy Of Love”.

What else can we hope to see from you guys this year?

We’re working on some new tracks we’d like to put out this year if possible, but there’s still a lot of work to do.

If we get to Barcelona, where should we head for a cold beer and some good vibes?

You should go to Marula Cafe without hesitation, it’s the club where Thompson and I DJ. They have live music every day and have a great musical selection. Iván Ivanovich, who co leads Rocafort, is also one of the residents. 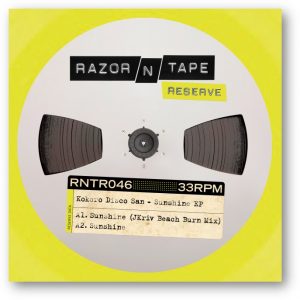