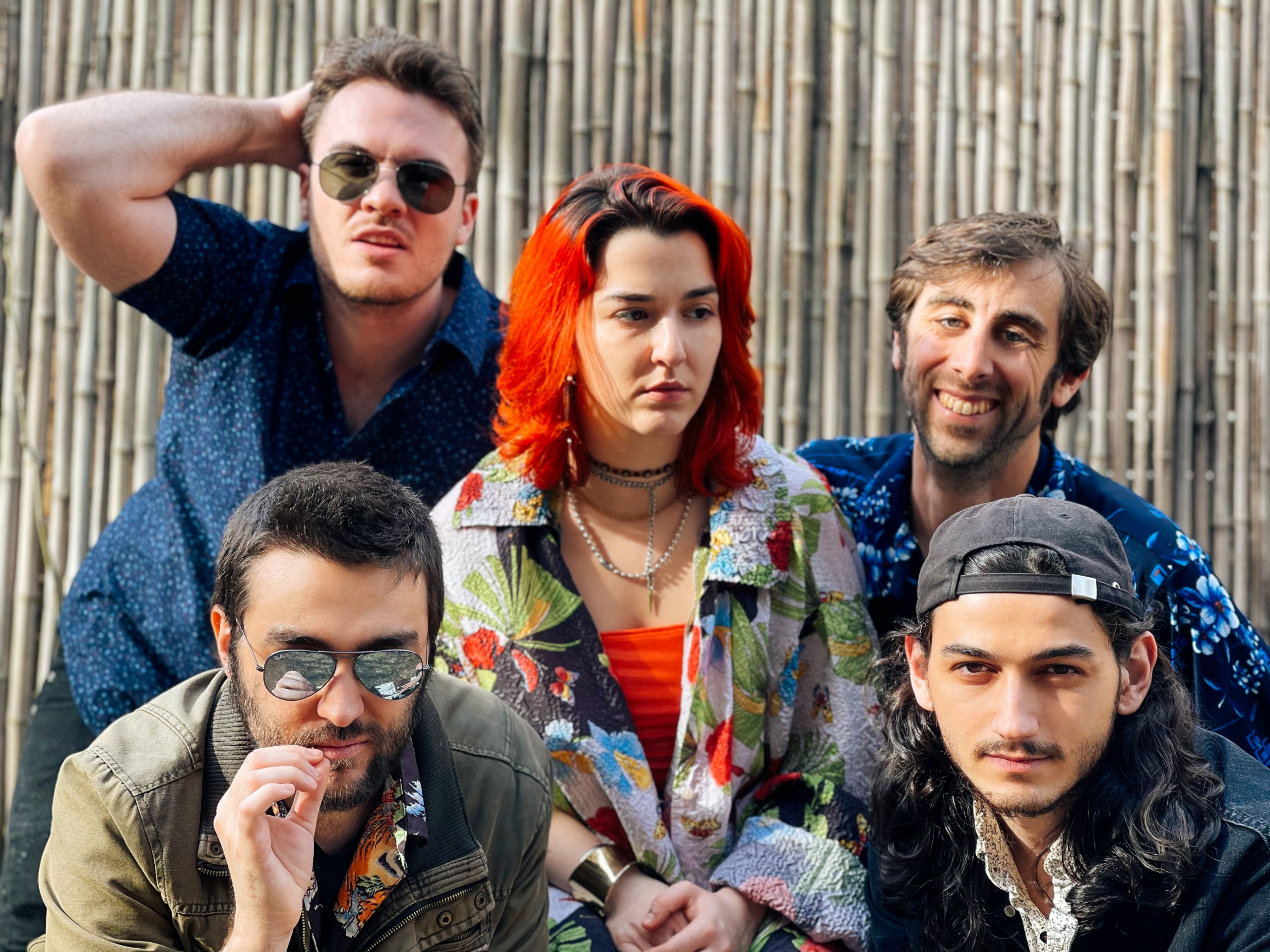 Effervescent nu-disco act Bad Business Club present their second supremely refined full-length album, the deliciously sun-soaked and harmonically rich ‘Naked Neighbor’. Following several releases on the revered Midnight Riot, the Bad Business Club return with eight delicately honeyed cuts certain to ring out blissfully over pool-sides and ocean panoramas throughout the long hot summer and beyond.  Informed by an irresistible blend of ‘Moroder-infused’ disco vibes, yacht rock flair, and understated nu-disco gloss, their sound is the aural embodiment of a gentle summer breeze.  ‘Naked Neighbor‘ was written at a hilltop cottage in Puerto Rico, while examining the theme of leaving old baggage behind as they reflected on their break from everyday life in Brooklyn.

Named after the Puerto Rican house in which the album was recorded, the nu-disco energy of ‘Casa Soleada‘ bursts with good time vibes! 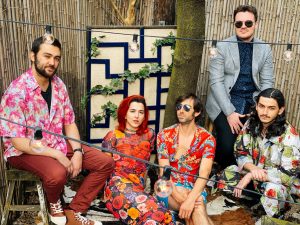 We’re a Nu Disco collective with a lot of contributors, but mainly consisting of Alex Vans (songwriter, and the guy writing this), Jackson Bell (guitarist, arranger), Sam Behr (vocals), and Max Azarmehr (drums/percussion). We started out as a pure throwback Yacht Rock band in New York City in 2017, playing our own Steely Dan inspired compositions, but after some fun introductions and collaborations from a few artists in the electronic scene like Morgan Wiley (Midnight Magic), FSQ, Chaz Bronz, and Woolfy, we moved in the direction of exploring the smoother side of electronic music, and have been making disco-inspired records ever since.

I’m originally from Virginia, US, which for outside of North America readers is about 400km south of New York. I met and started collaborating with Sam, Max, and Jackson after I moved to New York City in 2017, but everyone’s from all over the US. Sam hails from Florida, Jackson is from Los Angeles, and Max, Texas.

After the pandemic, I moved back to my hometown in Virginia, but with the rest of the band and our wider musical base in Brooklyn, and my frequent trips up there to record and perform, we still identify as a New York group.

The release of Naked Neighbor on August 13th, and the subsequent Vinyl release (hitting stores in North America in September). We’ve been hard at work getting our 7-piece live act together and tightening up our live set when we start playing live in November.

Other than that, enjoying writing music and enjoying nature in my hometown.

Talk us through your new album Naked Neighbor..

The album is basically about examining the theme of leaving old baggage behind and trying to be at peace with the regrets over people you miss that are no longer in your life. Flip me Over can be distilled into starting a new relationship, and all the excitement and confusion that goes along with it, where Tired of Being Over You fast forwards to an attempt to wash away an old flame from another life.

Too Hot to Tame (Prelude) is actually a remix of Runnin’ from you from Cole Odin, but he made it so unique, I felt it went beyond a remix and deserved its own unique space in the album, where Runnin’ from You is all about the interplay of Sam and my vocals and talking about two friends or lovers trying to maintain distance. Casa Soleada is a good-time disco tune where the music hides some melancholy lyrics, and Reflections to meditates over the album’s theme of leaving old baggage behind.

Early Morning Hours functions as a conclusion to the theme, finally being at peace with being alone and starting fresh. Woolfy’s Summer Sunshine Version of ‘Flip me Over’ is kind of an epilogue in style, with stripped sonics allowing space for the soothing vocals to breathe before astral synths add a fresh sheen to the groove.

Do you have a particular production process that you follow?

With our new stuff, we wanted to approach it from a perspective of everyone focusing on their individual strengths. I start alone with the skeleton of the song. I focus on only the lyrics, vocal melody, and chord progression, doing my best not to influence the vibe toward any particular style.

I then bring the bare-bones demo to our producer Morgan Wiley and the rest of the band. Jackson, Morgan, and Max collaborate on fleshing out the demo by engineering a rhythmic feel and an instrumental arrangement, while Sam adds her incredible vocal talents.

Once the demo process is done, we get in the studio and play our live instruments over the demo. Finally, we spend a whole day per song solely on vocal performances to really nail down the vocal interplay between Sam and me.

Talk us through track Casa Soleada in a little more detail.

Casa Soleada was the name of a cottage in rural Puerto Rico where I stayed for a few weeks in late 2019 to write a few dozen songs (the ones from this album being among them). It’s about trying hard to wash away an old life and old regrets.

I was there to write songs, but also to process what I was going through emotionally and spiritually, and that home best represents that process.

Morgan and Max gave it a real classic disco vibe a la Chic or Donna Summer, which gives it a dichotomy between the upbeat music and the bittersweet lyrical themes.

With all of us itching to play live, my first choice would be us! After that, we’ve been fortunate enough to have artists like Cole Odin and Woolfy vs. Projections spinning our tracks. I’d love to be able to collaborate on a remix with someone like Luxxury or Bottin, who I’ve been listening to non-stop since we ventured into the Nu Disco genre.

Where is the ideal place to listen to it?

Definitely in a warm place by a body of water. While I’ve been getting into DJ’ing I still have so much to learn, since I came into this from the indie songwriter side of things in the southern US. So, while is a body of water, it’s probably not Ibiza or South-of-France music, but more of a dive-tiki bar vibe on the Chesapeake Bay where I grew up (although if you’re on the Mediterranean I’d love for you to listen too).

Back Track by Cerrone. I found it at this little underground record shop near me. I’d never heard it before, but it’s amazing. Some tunes are straight up early Gino Soccio feeling, but there’s a few that are almost Yacht Rock. There’s a tune called “Strollin’ on Sunday” that is so late 70s R&B-feeling Yacht Rock, it could have been on an Al Jarreau record.

If someone wanted to get to know your taste, what album should they listen to?

It’s probably 2 albums since we occupy this 50/50 space between classic disco-cusp Yacht Rock and Nu Disco. Start with Gaucho by Steely Dan, especially the tune “Glamour Profession,” then maybe Anxious by Holy Ghost!. I listened to those two records constantly while writing these songs.

What artists have you got your eyes on at the moment?

Our friend Woolfy (Simon James) just started a label with with partner Projections (Dan Hastie). I’m really excited to follow the what new artists they’ll be putting out.

What are thoughts on Spotify positive and negative?

From a brand awareness perspective its great. We’ve been able to get tons of exposure on playlists, and having our friends and fans linking their network to our Spotify catalogue.

The thing that can be difficult and frustrating for an artist is predicting the algorithim. An artist really depends on the algorithim working in their favor for their time and investment in Spotify to pay off. When the algorithim switches up or doesn’t ‘catch’ your music for one reason or another it can be very discouraging.

But at the end of the day, its one channel, and counting on it exclusively is like putting all of your money on Bitcoin. Its best to diversify.

If you could change one thing about the music industry what would it be?

I toured with a band full time throughout my 20s, but now I live a double-life working in the tech industry. I’m very fortunate my double-life career gives me the flexibility to continue to build the band and make music. But I do wish that the commonly held notion that most bands “make all their money touring” was more loudly debunked because just isn’t true for a band that’s still trying to build their fanbase. Touring is expensive and usually puts less-established bands well in the red.

In a perfect world it would be a dream to see the same level of venture capital investment in musical projects and other creative endeavours as in spaces like tech to give time for new bands to develop and thrive.

What is the best musical advice you’ve ever been given?

Probably from Chuck ‘Chuck da Fonk’ Fishman from FSQ, who told me that I don’t have to do everything, and that I can trust and rely upon the folks who I’ve been fortunate enough to surround myself with like Sam, Jackson, Max, and more to lend their talents.

Outside of the album release and the Vinyl release, I’m working on a fall “re-issue” of our 2018 Yacht Rock album “Day Job Guys.” We’ll be deconstructing it, bringing Sam in on the vocals that I had to really stretch my range to do, and collaborating with Chas Bronz to give it that Nu Disco vibe. 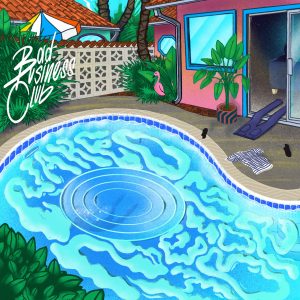