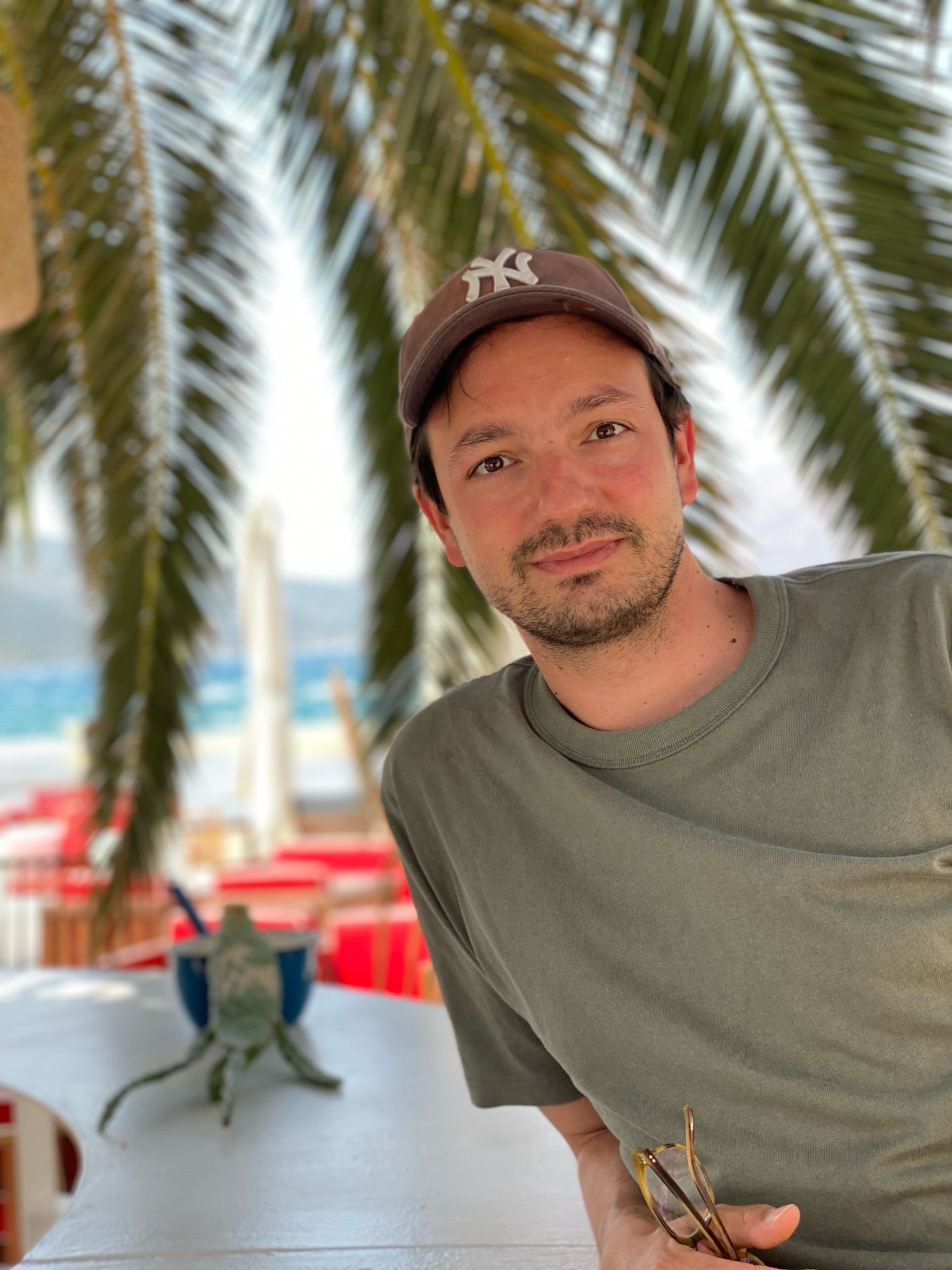 PARTYFINE is a label created in 2013 by French producer Yuksek. The label touches on everything around dance music, or rather “more or less disco” as the label’s latest opus proclaimed. It was also the occasional residence of artists like Dimitri From Paris, Dombrance, Weekend Affair, Jean Tonique, Getaroom, Polocorp and others gathered around maxis, EP’s, and six original compilations to date.

This next release comes from Alex Blex entitled ‘Nice Move Peter!’.  On the surface, Blex has a tidy life. He gets up smiling, wears shirts, eats eggs mayonnaise in the canteen, and works in a grey office with a green plant. His hyper-normal daily routine is made up of spreadsheets, of figures, and slides full of diagrams. Nobody knows, however, that he wears an undershirt under his shirt, and that he travels the strangest corners of the Internet. And his music looks like him, of course.  At first glance, everything is normal, stable rhythms and honest chords. And then suddenly, without realizing it, we enter his world, where New Beat rubs shoulders with Pink Floyd, and disco from the fiery Carrère Musique label. The groups Red Axes, Django Django, Nu Guinea, or the label Border Community also occupy a place of choice in this discreet little world.

Alex Blex met Yuksek nearly 20 years ago, in Reims, after writing him a private message on Myspace, but you have to know how to take the time.  He also raged in other secret and perishable but no less formative formations; “Nice move, Peter!” is his first solo release. 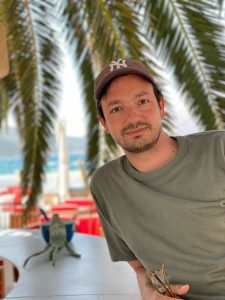 Thank you for your invitation.

Where are you right now and how are you spending your time today?

At home in Paris. It’s Saturday morning, the sun fills the room. I just poured me a mug of hot coffee and I am eating a toast of “gache” (that’s a very niche kind of delicious French brioche). I’ll spend my day preparing the room for the baby my wife and I will welcome in few weeks, I’ll go dig some for some vinyl in a flea market, and cook for our friends we have invited for diner.

How is the mood in your city, are clubs and parties running as normal?

I feel there is a pretty positive mood in Paris right now. Winter this year is pretty sweet and life seems to be resuming its normality after two years of general anaesthesia due to sanitary measures. Restaurants, Museums, Theatres are now all open. Even Clubs, they just reopened this week. Lots of new places are blooming on every corner. New paradigm, new energy.

Is there a particular spot that you frequent, and we should visit if we get to your city?

I would definitely recommend “Chez Martin” close to Le Marais district. Loic will take care of you.

Your profile is a bit of a mystery, what can tell us about your journey in music? Or is it a secret?

I started piano as a child, joined a band in high school, threw parties while a student, released some EPs, did some remixes, toured as a live band and DJ in France and Europe, and then took a long LONG break (probably 7 or 8 years). When I moved back to my place two years ago, I found back all my studio stuff and something inside me just clicked!

Your press release suggests you might be an accountant in your day job. Is this anywhere near the truth?

It’s totally true. I am running the finance department of a French design company that you may know. My day job is made of team meetings, roadshows, financial presentations, and… spreadsheets!

But back to the night – are you a DJ as well as a producer and what are you most comfortable doing?

I really love Djing, but I am even more comfortable and creative while in my home studio. Writing music is the thing that most stimulates me. The possibilities are infinite. Any situation can be a source of inspiration. The studio is biggest playground you can leave me in, the biggest map you can explore. I’ll never get bored.

How would you define the sound of Alex Blex?

It’s neither EDM nor IDM, I like to call it UDM for Utilitarian Dance Music. I have a pretty big vinyl collection of Library Music, and I have always found interesting the fact that in this kind of music, musicians are given second place behind the music. Music prevails on everything else.

Who are the artists that have inspired the music that you make?

Long list! I am listening to music about 5 hours per day… But if I have to name few ones that probably flow through this EP, I would say Nordic alternative band Hubbabubbaklub, forerunner and US house master Bobby Konders, Trinidad steel band music, and NYC’s DFA production.

You’re about to drop your next release on Partyfine. But who is Peter and what did he do to upset you?

Oops! Not sure the meaning you get is the right one..! As we will see it later on in the interview, the track “Nice Move, Peter” is, in a way, a tribute to the 60’s actor Peter Sellers. That’s why. What makes the whole thing funny is that Peter is also Yuksek’s name (Pierre in French). So, it’s a kind of wink, like “well done Pierre, you signed this EP on your record label”!

You go back a long way with Yuksek. How did you guys initially hook up?

Back in 2000-somehting, I was living and studying economics in Reims (French capital of Champagne). I was spending nights on the internet digging for music and new stuff. By Serendipity, I found Yuksek’s webpage and listened to some of his tunes. By reading his biography, I discovered he was living in the same town! I then dropped him an e-mail, he answered with me an invitation to meet him in his studio. That’s how it started.

Yuksek has a pretty strong following in France. Why do you think he is so prolific?

I have been following his work for more than 15 years now (I still have a vinyl copy of his “Crossword” EP and I am still playing it!).

I think he has a long-lasting career on the international scene because he’s a talented song writer, reputed producer, world class remixer, OST composer, top-tier DJ, and label manager. He’s the  French James Murphy! He’s pretty discrete but he actually contributed to several of the nominees’ albums of our French Grammys (Victoire de la musique).

Talk us through the tracks of the EP a little.

Sure, with pleasure. This EP comes with 3 original tracks and one remix. Let’s start with the eponymous “Nice Move, Peter!”. I wrote it as a fictional OST for 1968 classic movie “The Party” with Peter Sellers. The mix of strong drums, deep bass line, synths riffs and Horns sections gives the whole piece a naïve but colourful atmosphere. It’s a mid-tempo track that’s perfect for a pre-dinner drink. Then comes “Wait for It” that sounds more industrial and urban. Muffled bass lines, 808 bass drums and groovy horns sections. Probably the most personal one on the EP, kind of dancy-weirdo-disenchanted atmosphere. I spent a long time making the Juno 106 I used on it sound as organic as possible. Definitely my soundtrack if I were walking in New York by night. Cherry on the cake, the last track is a “Nice move, Peter!” remix from Yuksek!

What has Yuksek done on the remix to your original? How do the tracks vary?

He kept the synths and horns parts and use them to create a strong disco track. Upper tempo, rougher sounds, bigger production. The energy that comes out of it is very satisfying. Can’t wait to hear it in clubs.

I heard that Leonardo di Caprio is a fan. Is this true?

What material are you working on right now? What should we look out for from you?

I am pretty active and inspired at the moment. This period is great, I am lucky. As for Champagne, for which winemakers combine new wines and old ones to keep the same taste through decades, I like to mix new ideas with old unused ones. For example, in “Wait for it”, the main theme has been written several years ago. Expect to hear new EPs in the coming months.

When you’re not making music what do you like to do to relax?

Actually, music is not my job, so music is what I do to relax !

What do you think is the biggest threat to this world?

What makes you happy?

Simple things: Sharing moments with family and friends, meeting new people, walking in the countryside and most of all eating unpasteurized cheeses. 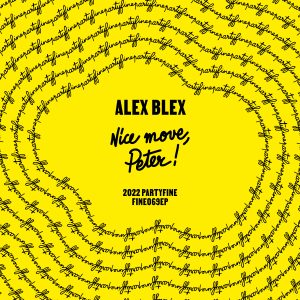