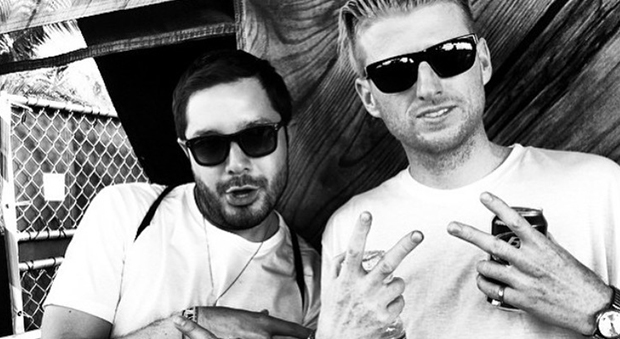 Whether you’re enjoying a private home listening experience or doing God’s work by mixing our tracks into others of a comparable BPM in front of people, Twin Turbo is here to guide you along the ascended path of music consumption mastery. This particular release marks an auspicious point in your personal evolution, provided you’ve been using the download codes we’ve provided for 3- D printable vitamins, as label favorites Shaded and Harvard Bass pool their unique energy signatures in a rare team-up.

The collaboration sees the two California-bred artists joining forces with a rapper named “Rossirock”, whom they chose after rejecting every last member of Twin Turbo’s in-house stable of MCs, who it seems will continue to do office chores in exchange for the possibility of someday lending their unique lyrical perspectives to a fun and modern club track.

The two original tracks were completed in early 2016, but we decided to hold out until our top remixer choices came through, and you’ll no doubt agree it was worth the wait you couldn’t possibly have known about. Cassy delivers what can only be described and understood and enjoyed as a “low-slung after-hours groover,” while Kenny Glasgow simply does his thing, which is exactly what we wanted as we are decidedly not in the business of trying to make Kenny Glasgow be anything other than Kenny Glasgow, no matter what you may have been led to think.

SHADED: it was fun collaborating with you, can you tell me how a Mexican dude from south San Diego got into electronic music, and became a Twitter one-liner sensation?

Harvard Bass: I got into electronic music by going to clubs down in Tijuana. I wasn’t 21 at the time and It was the only place I could go underage and see DJs perform. I would also ditch school a lot and go to the Starbucks by my school and one of the managers that worked there loved house music. We would share music back and forth. One time, he invited me to use his home to play records. He had a ton of house records and we would literally sip on beers and play records all day when he had his days off. Then from there all I wanted to do was DJ so I saved some money up and bought me a dope ass Stanton DJ box set up. That shit was fire.

S: I am a big fan of the real old school proper electro, and weirdly enough that is when I heard your name for the first time, in those circuits. Tell me about your favorite DJ’s and producers that inspired you to get to where you are today?

HB: Yea that electro boom was how I got into the game. That’s when Tiga first found out about me. At the time I was really into 2 Many DJs because they just don’t give a shit. They like all kinds of music so they played records they like. Those were really the guys who I looked up to at the time but I also had this love for Bay Area house music. Back then it was hard and expensive to buy European white labels so I stuck to west coast house records and I immediately fell in love with Mark Farina’s house sound and also Claude Von Stroke. Those were the guys who introduced me to other house artists such as Derrick Carter and Green Velvet which are the guys who have inspired me to be where I’m at today.

S: Our  collab was pretty spontaneous. What are your thoughts of the final product you and me put together in the studio?

HB: I think it’s dope and unique. When I hear it back, I can hear what were all about at the time we were making it and I like that. I like the realness in the tracks and the remixes as well. You know how much I love G shit. Ha ha

S: What is the one go-to piece of kit you use on almost all the tracks you make?

HB: I love claps and reserve hi hats from 808s and 909s with some kicks that my Chicago homeboy, Angel Alanis lined up for me. That’s what my sound has been since forever. Every now and then I’ll get into another trip and mess around with my Casio RZ-1.

S: If you could only do one for the rest of your life what would it be… Produce music and never DJ or DJ and never make music again?!

HB: Man this one is the hardest questions ever. I love them both but if I had to choose I would choose making music and never DJ’ing again. There’s great feelings on both sides whether DJ’ing or making tracks, but the best feeling comes when you hear people playing your music out. I dunno, it’s like you connect to the DJ and the crowd especially if it gets a great response. It’s like you shared to them a piece of what has been going on in your brain and they enjoyed it for that moment in time. (Damn that was deep)

HB: Not gonna lie, I didn’t know you were from California when I first heard your music but then a saw a photo of you and I was damn near convinced you were from southern California and low and behold, you are! I see you love surfing. When you go surfing before a studio session do you bring back an idea you had while you were catching waves in the morning?

S: Sometimes I will go out for a surf, and be out there in the water and start humming a tune in my head. It might be some pop hook I heard on the radio, or something really corny and catchy, but the process gets my mind right for making music. It helps, to say the least, with my creativity.

HB: I seen you play live a bunch of times and it’s always super rad. Has there ever been a show where everything went wrong and you had no choice but to play a DJ set?

S: So far this has never happened to me! (knock on wood) I have got my set up and back-up set up down so tight that if hardware malfunctions I have plan that can be executing on the spot in the booth. My last resort is in fact USB sticks for CDJ’s in case all fails, but like I said I have not had to break ’em out yet, and hopefully will never have to!

HB: If you were another artist hearing this EP for the first time and I asked if you can remix it, which track would you choose and why?

S: For sure the lead ‘Time Wasting’ featuring Rossirock. He nailed the vocals and they kinda transcended different musical soundscapes, so that would have to be my choice.

S: Of course, 100% So-Cal has helped sculpt what I play and make both in and out of the studio. Everything from being a kid surfing, skating, and listening to rock and punk, to growing older and going to LA on the weekends for illegal raves and shows in Hollywood and Downtown. For me, I related the evolution of my sound to being rebellious. I didn’t want to hang with the cool kids, because I thought that was lame. That is why we skated, surfed, and listened to punk. I loved being told the rules, and then going out and breaking them. That shit got me excited. So when I found out about techno my life changed. I was like “damn, this is some real shit that no one I know is into, this is so awesome.” The idea of a form of music not based on conventional attitudes inspired me.

HB: Did you ever think our collab was going to come out as dope as it did? Did you imagine you would be a part of one of the top Labels (Turbo Recordings) out there?

S: I am so stoked and can’t wait for people to hear it. And the fact it is coming out on Turbo makes it extra sweet. Turbo has set a standard in both not giving a fuck about trends, and introducing top notch music from artists I am unfamiliar with, and that’s exciting. So yeah, I am fucking stoked!