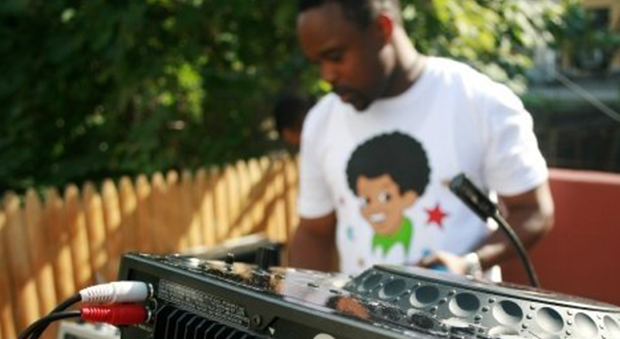 The new Local Talk release is from DJ Spinna, who also known to some as Chopp Master Flopp, has previously released on labels such as Nervous Records, BBE, Nite Grooves and King Street.

American Based DJ Spinna was born and raised in the Brooklyn district of New York City. Having begun his career in 1994, his legacy in music spans over two decades and he has worked with everyone from Mos Def to Stevie Wonder, and even Eminem.

Starting his career as a member of the underground hip hop group Jigmastas, he has broken down musical barriers between the worlds of hip hop, deep house, soul and jazz, and is also a member of Polyrhythm Addicts and The Free Radikalz.

With two contrasting tracks, this expertly crafted EP might surprise some DJ Spinna fans, as it blends elements of his traditional soulful house sound with cosmic funk and raw analogue sounds.

“TB Or Not TB” centres around an acid bassline, which sits under fast flowing hi-hats and ride cymbals that fill the track with energy. Textured synths playing jazzy chords are introduced to this raw and analogue masterpiece that’s both dramatic and timeless.

“Cosmocrank” starts with spooky synths that are light and delicate, floating like a leaf in the wind. Stripped back and spacious, the track’s bassline played with sparse notation, fills the track with some underlying funk. Cosmic vibes and a melodic structure make this a quirky track of House music done with style.