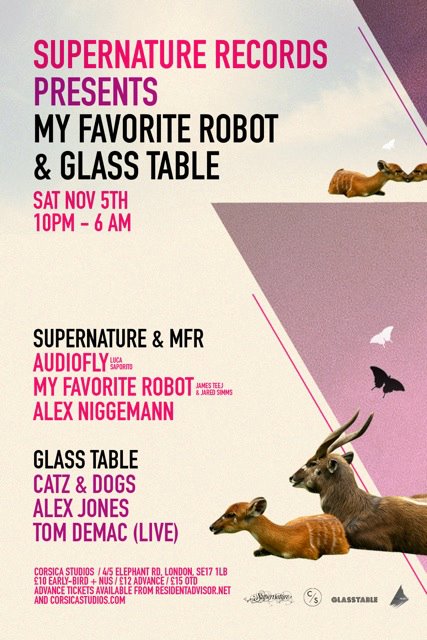 [Party] LONDON! Like the post on Facebook HERE, and be entered to win TWO FREE TICKETS. How easy is that? We love giving away free tickets so take advantage of our easy as pie giveaways.

NOVEMBER 5th – Join us at Corsica Studios for quite a loaded lineup of amazing talent including Audiofly, My Favorite Robot (James Teej & Jared Simms), Alex Niggeman, Catz n Dogz, Alex Jones and Tom Demac (live). Seriously, if you don’t enter the contest, you are missing out here.

MORE ON THE EVENT

Supernature records a name synonymous with quality underground music brings it’s second instalment of a series of London showcases following on from the successful first outing at Nest back in June. Just like then, Alex Niggemann is back to deliver his version of dancefloor artistry freshly inspired from an extensive tour of South and Central America that will surely be reflected in his upcoming album on Steve Bug’s PokerFlat imprint.
Supernature bosses Audiofly lead bonfire night festivities with the label firmly involved with some of the most exciting developments in electronic music both sides of the Atlantic.

My Favorite Robot’s James Teej continued his charge in 2011 with his Elements of Desire EP on Supernature in August with collaborations from Shaun Reeves & Lee Curtiss. For this event My Favorite Robot the act is also represented by Jared Simms co-owner of MFR with Teej & Voytek Korab. 2011 has seen My Favorite Robot releasing on Crosstown Rebels, remixing for Jori Hulkonnen’s Processory project on Sugarcane and is fast becoming one of the key taste-setting labels & acts for the trained ears of some of the industry’s main players. Props come from Seth Troxler to Jamie Jones, the quality of the music will be showcased in London for the first time here at Corsica Studios.

Room 2 brings a different vibe but no drop in quality as Glass Table label boss Alex Jones takes up the reigns presenting label contributors Catz & Dogs from Szczecin via Berlin. Their Claps II Dogz EP with Soul Clap was a well received release on Glass Table back in March. The night is rounded off with the must-hear live set from rising star & Hypercolour favourite Tom Demac.