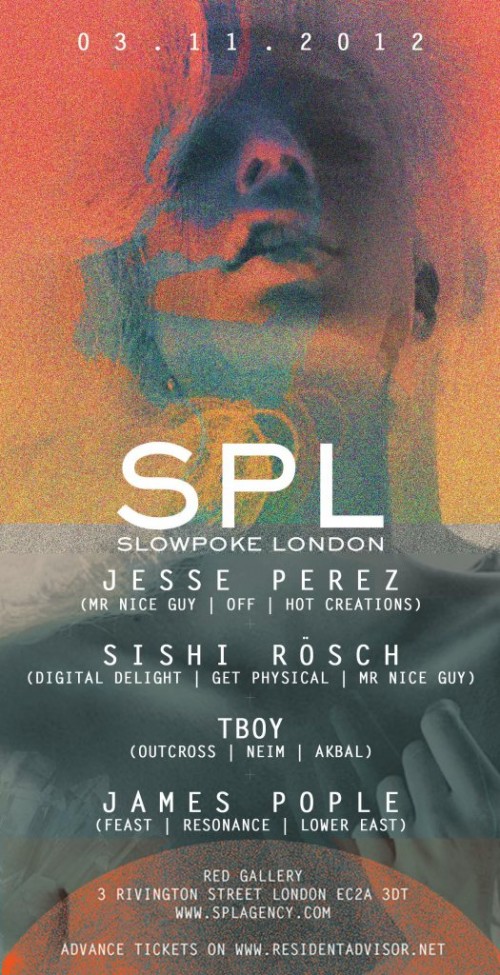 [Party] London Lovers!!! You all are truly blessed with some of the most epic lineups in underground sexy goodness. Dope party alert is on the rise! This Saturday you all are blessed with a supreme lineup of what promises to be a sinfully sublime night of sound. Slowpoke London (SPL) is back with their signature darker, sexier vibe representing the sound of the roster that has been built over the last year.

Head of ‘Mr. Nice Guy Records’ more gangsta than Miami Vice, Jesse Perez graces their decks and kicks off his tour with his fist U.K date. This Miami Hothouse definitely knows what’s up and with a strong of releases from ‘Jesse Don’t Sport No Jerri Curl to ‘Mama Me La’ and ‘Hialeah House Party’ he is trail blazing his way toward 2013 with his unique blend of hip hop, house and techno with a massive dose of Latin Miami thrown in for the freshest measure.

Sishi Rosch has had a massive 2012 and 2013 looks set to be even bigger following the success of his recent release on Get Physical with Damian Uzabiaga and solo release on Kolombo‘s Lou Lou records. His own labels Digital Delight and Sultry Vibes have gone from strength to strength this year confirming his as someone who makes, plays and knows great music.

Following James Pople‘s break through with his debut release on Lower East in 2011, James has spent most of 2012 honing his production skills and collaborating with some leading figures in the underground house scene ready for release in early 2013. His stand out EP during the Summer on Feast entitled ‘Who’s that Girl’ gained him the support and recognition of a long list of who’s who DJs and producers setting him up nicely for what he has in store over the coming months.

The latest addition to the SPL family tBOY will be showcasing his latest sounds having been working with the likes of A Guy Called Gerald, mixing down his first tracks with Justin Drake from Peace Division as well as his latest project with the Wildkats releasing on Hot waves and his solo releases on Miguel Campbell’s outcross records. The future is very exciting for tBOY and we can’t wait to show you what he’s got up his sleeve.

Don’t miss out you sexy Londoners!