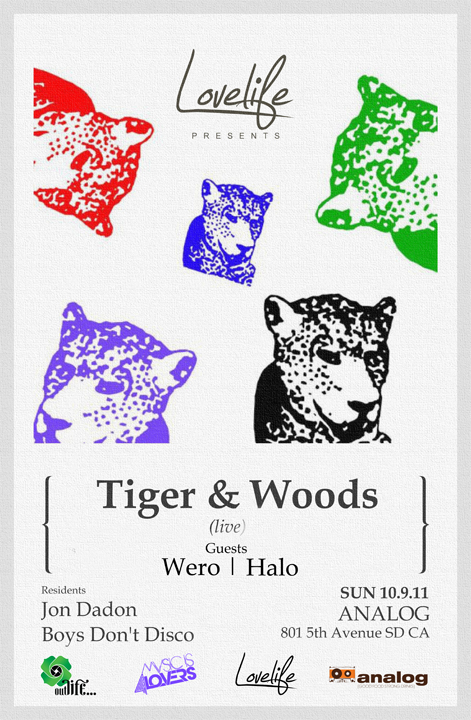 This steamy Lovelife party will be like no other. We have a sextra special treat in store for you Lovelifers.

Coming through San Diego on their first US tour, the mysterious Italian deep and disco duo TIGER & WOODS will be performing a live set!! This is one disco party that is bound to get the hips gyrating and the loins burning in each and every man, woman, and leopard in the building.

Shrouded in mystery! No one knows where it’s coming from, no one knows where it’s going. Well, that’s all about to change. Those special extended disco versions that have been carefully tuned, remixed, over-dubbed, sliced and diced by Larry Tiger and David Woods have caused quite a stir. In a heavy and endless rain of edits, they are a cut above the rest. Looking to the future, while digging in the past, Tiger & Woods use both recognizable and exotic sources supplemented with original production to take you to undiscovered terrains that somehow feel like home.

The DJ and production duo became a hit in the past year or so with their their slow and punchy disco edits, which have so far come out on rubber-stamped 12-inches through their own label, Editainment. More recently they’ve begun playing live in clubs together, debuting last fall at Robert Johnson and later putting together an RA Podcast and a headline set at Sonar. Despite their growing popularity, they keep their identities under wraps, in order to, as they put it, “keep it spicy like it was back in the day.”

Through the Green is Tiger & Woods’ first release on Running Back, not to mention their first “official” release in general: everything they’ve put out to date has been a white label. Half of the tracks are from their past records, and the rest are previously unreleased.