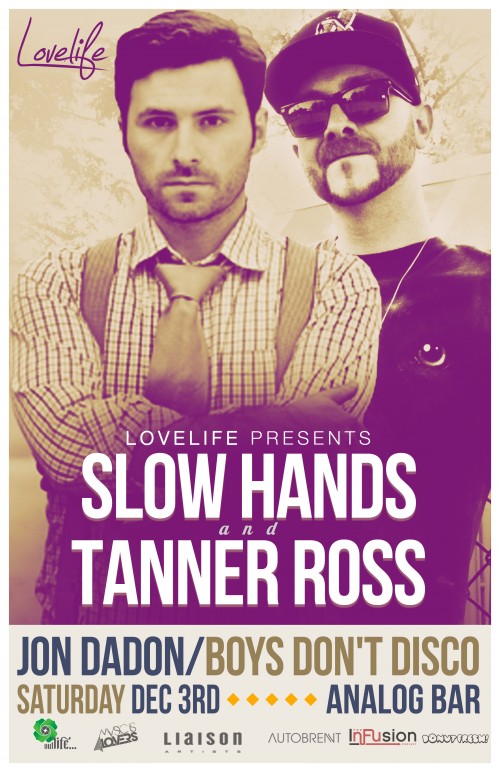 [Party] Lovelife is at it again – this time with sexperts Slow Hands and Tanner Ross. The event will be held on Saturday, December 3, 2011 at Analog Bar in San Diego. Since you’ve all been such good Lovers, we’ve created a special deal for you, offering a hosted bar for those who purchase tickets in advance! That means, hosted vodka from 9-10pm for tickets holders. PLUS! You get 25% off your dinner if you have it at Analog before 10pm. We’ve been getting a little crazy with our themes too. Pop out those fangs Lovers and take a bite out of this! (Theme – Fangs & Chains)

Ticket info
– Early Bird $5, General Admission $10
All tickets include:
– Hosted Svedka from 9-10pm
– 25% off food until 10pm
– A tree planted for every ticket purchased

Hailing from New York City’s underground house scene, Slow Hands, aka Ryan Cavanagh, makes deep house music to dim the lights to. His tracks are sultry, laid-back affairs, with atmospheres as balmy as midsummer rooftop parties. Behind the decks, he keeps it deep and weird, bumping through subtle but epic sets that have made him a favorite at Wolf + Lamb, the dark and soulful Brooklyn label that Resident Advisor ranked #3 of 2009. With only a handful of releases to his name, Slow Hands is one of house music’s newest virtuosos.

Slow Hands debuted in 2009 with “Fast Tongue,” a punchy slow jam that saw release on Significant Others EP, Wolf + Lamb’s widely praised mini-comp. Later that year, Slow Hands outdid himself with his remix of No Regular Play’s “Ladyluck,” a track whose warbled crooning made perfect fodder for his languid production style. Both tracks were praised in print and online, described by RA as “make-out disco” that “sorely longs to be played outdoors.” 2010 will see several more releases by Cavanagh, as Slow Hands as well as various other eclectic alter-egos.

For an artist with such distinctive style, Ryan Cavanagh is surprisingly new to electronic music. He studied classical guitar and composition until 2001, at which point he dropped out of school, bought a copy of Logic and dove head first into house and techno. He started DJing constantly around Baltimore and NYC, and eventually got noticed by Gadi Mizrahi of Wolf + Lamb, who gladly took Cavanagh under his wing. He still keeps busy with a number of different side projects, like Male Madame on Fade Records, and Worst Friends, his spastic experimental group on Moodgadget. But Slow Hands shows Cavanagh doing what he does best: working with sexy rhythms that take their time, letting the groove unfurl with ease.

The one constant throughout the life of Tanner Ross is music, since being raised in New Jersey in a family environment heavily influenced by music new and old, to his current status as a passionate and driven DJ and producer. In High School he found himself in numerous bands playing everything from funk to punk but it was after progressing to study synthesizers and production at Boston’s renowned Berklee College Of Music that things fell into place. Captivated by underground electronic music, his own productions were soon being released on labels such as Dirty Bird, Freerange, Airdrop and Culprit and this naturally led him into DJing, where he met now regular collaborators Soul Clap, and his journey became clear.

Fresh out of college, with various musical projects, Tanner set out on a musical mission across the States and beyond, to such meccas of dance music as London’s Fabric, and Berlin’s Watergate.. With his eyes wide open and finger on the pulse he was soon forming part of a Boston super group SECT alongside Soul Clap. Not only is the super group’s album a near and anticipated prospect, Tanner’s solo career is taking off with releases due in early 2011 on !K7, Double Standard, No 19, and the biggest coup of them all, a solo album is in the works, to be released later this year on none other than Wolf + Lamb. It’s quite clear Tanner’s musical trail blazing is set to continue much further…