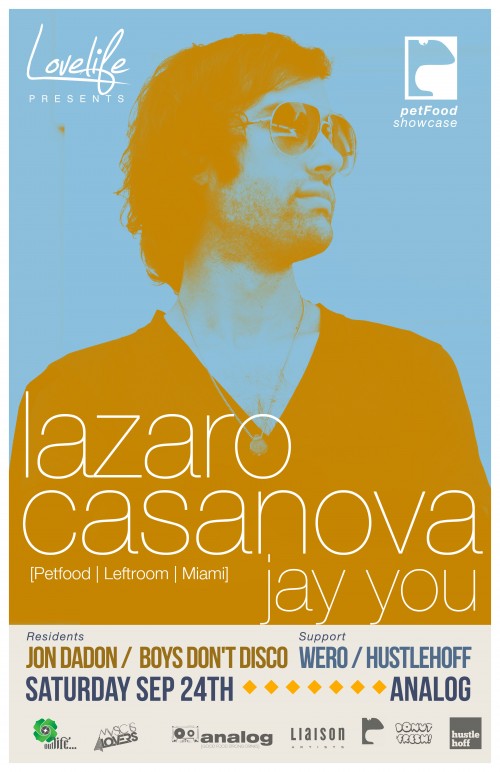 Lazaro Casanova is a full time groove-making producer, DJ and label owner. A brooklyn art school drop-out who was always deeply immersed in music one way or the other. Hailing from Miami, FL he has gone from considering dance music as a cheesy taboo to single-handedly being a trend setter in house music. Establishing himself as a highly regarded DJ and producer with a global stage.

He has held residencies in Lima (Peru), Monterrey (Mexico), El Paso (Texas), Juarez (Mexico), Washington DC and Miami (Florida). Showing a very note-worthy talent proven to work more than just once, Casanova is no fluke. He brings house music with a truly unique twist into his DJ sets. Ranging from deeper groovy sounds to jackin’ afrocuban rhythmic patterns, he is able to firmly direct crowds in both smaller and bigger rooms with unmatched sucessful results.

Gathering fans not only on the dancefloor but in the industry itself. With notable constant support from the likes of Oscar G, Nic Fanciulli, Seth Troxler, Matt Tolfrey, Lee Curtiss, DJ Three, X-Press 2, Radio Slave, Adultnapper (among countless others). Casanova has proven his musical range to reach all crevices of dance music. Casanova has been welcomed into a broad range of record labels spanning from Nervous Records to Leftroom Records. Also sparking remix requests from all ends of the music spectrum. With Lazaro Casanova there is no such thing as ‘underground’ or ‘mainstream’ there is only good house music in its rawest and purest form.