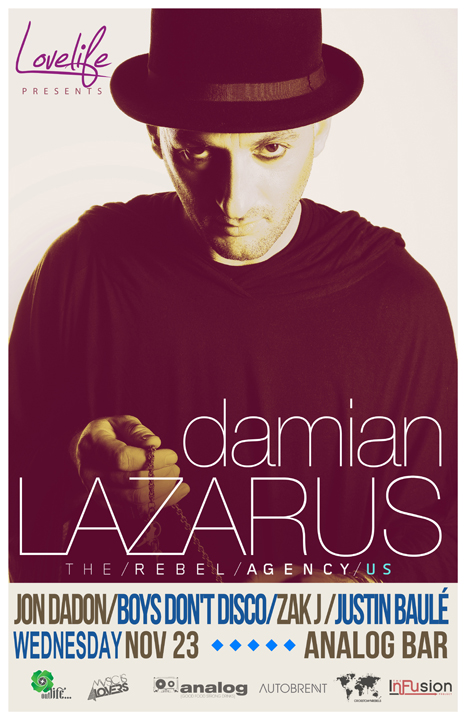 [Party] On Thanksgiving Eve – November 23, 2011 – San Diego will be experiencing some proper underground from caped Crosstown Rebel himself, Damian Lazarus. Lovelife continues their music series with yet another groundbreaking event for the once quiet frontier of San Diego, California at Analog Bar.

PURCHASE TICKETS
$5 Early Bird, $10 GA – Tickets provided by InTicketing.com. A tree will be planted for every ticket purchase. Ya Lovelife is Green like that.
RA Event
FACEBOOK Event

Since the moment he spun his first record, Damian Lazarus’s mission has been a clear and urgent one: to blow away the mediocre, the over-inflated, the obsolete; to seek out and celebrate the energetic, the important, the new. Always rebelling, always going places.

“…and to have fun in the process. Playing around with different styles and ideas is what I do best,” Lazarus explains.

Driven by an almost childlike curiosity, a vivid imagination and wicked sense of humour, he’s used his role as a DJ, label owner and now musician to nurture and share the most exciting and experimental music on the planet. Drawn to the darkness, but buoyed by the light, ever ready to embrace new ideas and different perspectives on music and the dancefloor, Lazarus is always ahead of the curve, with a wry smile on his face and a neat trick up his sleeve. How many DJs do you know who’ve played ‘Reviewing The Situation (from the Oliver! soundtrack, no less) half-speed to a jubilant crowd at DC10 in Ibiza? How many DJs do you know who’ve received a sitting ovation on the dancefloor?

After working as Music Editor then Assistant Editor at Dazed & Confused, Lazarus joined London Records and in 2001 became head A&R of the City Rockers label. Here he helped sign and release some of the biggest tunes of the era, including Felix Da Housecat’s ‘Silver Screen Shower Scene’ and Tiga & Zyntherius’s ‘Sunglasses at Night’; his Futurism and Futurism 2 compilations remain the definitive documents of electroclash, not only providing a snapshot of the underground at that crucial moment in time, but mapping its future too.

Damian received a major Djing break in 2002 when he was invited to spin at Barcelona’s Sonar Festival and by 2003 he had residencies at some of the best club spaces in the world. His tenure at Circo Loco (DC10 Ibiza) has become the stuff of legend and found him consistently breaking boundaries of sound and stamina, freaking out the dancefloor and taking those on it to places they never knew existed, and may never get to again.

Inspired by the new energy and possibilities in international club culture and music, Lazarus founded Crosstown Rebels in 2003, the label’s records offering all kinds of unique and twisted angles on cutting edge electronic music. Recent releases on Rebels from Jamie Jones, Seth Troxler, Deniz Kurtel and Art Department have found the label consistently breaking new ground and the new imprints CDR (a digital only label) and Rebellion are set to change the rules once again.

In 2008 Damian began Lazpod (http://www.lazpod.com/), a monthly excursion into weird and wonderful sound, a radio show that draws influences and inspirations from all corners of the musical spectrum and is delivered in a fun and laid back style. With many thousands of fans across the globe, Damian uses the show to let listeners in a little closer to his experimental and eclectic tastes.