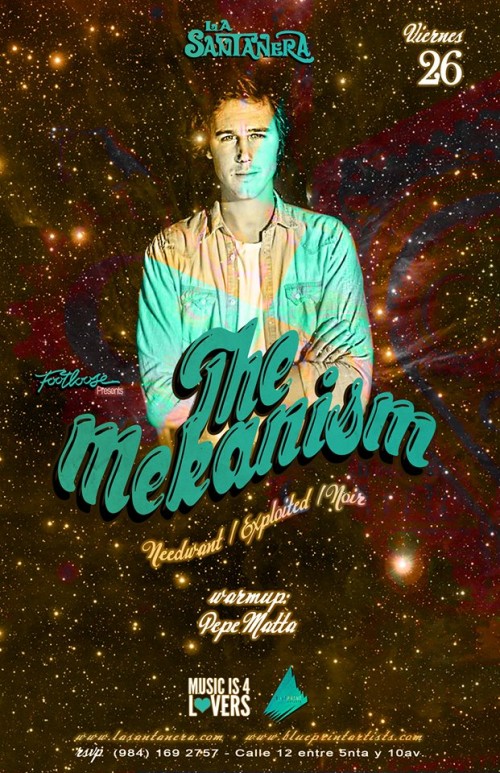 Our good friends at FOOTLOOSE Presents keep bringing amazing talent to the little paradise town of Playa Del Carmen, Mexico.  They have continually booked quality deep bookings and they do so again this weekend when they bring The Mekanism back to town. The Mekanism first grabbed our attention with his debut EP on Needwant, and his track ‘Missing Love’ blew us out of the water.  After hearing that, we became instant fans, and now can’t get enough of his deep groovy sound. Playing at the famous La Santanera, we are so ecstatic to see these high profile bookings coming into town each weekend, and The Mekansim is another great addition to the FOOTLOOSE roster.

MORE INFO ABOUT THE PARTY HERE

The Mekanism continues in the rich history of fine Parisian House Music. In a very short period of time the young French producer has created an international following after a selection of sought after remixes and a stunning debut EP on Needwant records.

Damien Rousell began his musical career path in 2000, DJing in some of the best clubs in Paris. After moving to Asia he began to make music rather then just play it and begin the journey towards The Mekanism. After moving back to Paris his first release came on the London based taste-making label Needwant, featuring two coveted singles ‘Can’t Believe’ and ‘Missing Love’. These two slices of low slung, warm analogue inspired House music have continued to pop up on dancefloors worldwide. A remix for Mario Basanov’s ‘We Are Child Of Love’ for the same label and a remix for Deep House stalwarts Noir only cemented The Mekanism’s reputation amongst connoisseurs of House in the summer of 2012.

The Mekanism’s modern house sound is now moving dance floors across the globe with a busy DJ schedule touching down in just about every continent. This is alongside a monthly residency at the Social Club in his home city of Paris where his DJ credentials are proved time after time. The year ahead will bring not only more remixes but original productions with releases on labels such as NTFO’s Sintope, Exploited and Mad Matt’s Local Talk.

Whether it is original production or remakes, one thing is for sure The Mekanism is one of House music’s brightest lights shining in 2013.