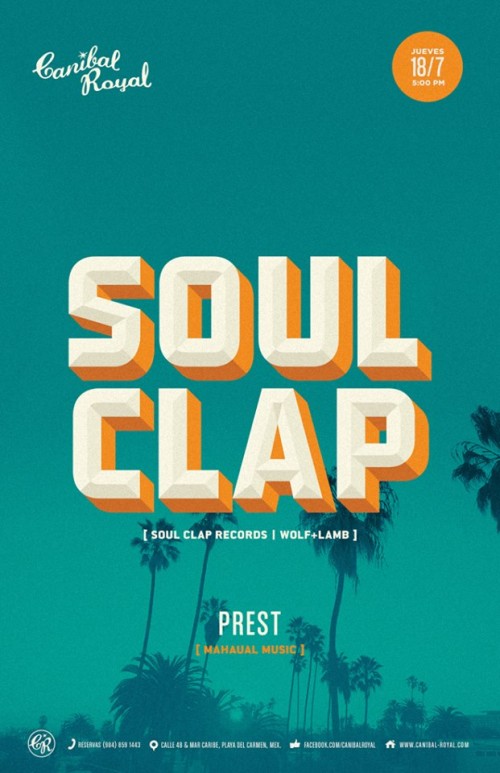 For their next AMAZING party they are bringing in the funky duo that is SOUL CLAP.  These two know how to rock the party and have been doing so all over the world for some time.  Whether it be all over Europe, The States, Black Rock City, South America, you always know you are going to have a good time when these two hit the decks.  Their new Crew Love parties also have taken the world by storm and have helped display all their friends and artists.  We are super excited to see these two return to Playa Del Carmen and to rock Canibal Royal.  Besides being one of the better venues in PDC, Canibal Royal also has some amazing food for you to eat while you relax in one of their comfy beds or lounge chairs.  If you are ever feeling too hot, the ocean is right there, so never you worry about things getting to hot.

Before today there was yesterday and after tomorrow is the future. Elyte and Cnyce’s paths were crossed for all time when a Sun Ra light beam sent from Saturn collided with the P-Funk Mothership and sent them tumbling to earth. Now, Soul Clap time travels on a musical spaceship of dopeness…

By harnessing the past Soul Clap looks to the future, with forward thinking productions, remixes and edits, creative DJ sets and some of the USA’s best dance music events. With the city of Boston firmly in their grasp they organize the highly praised Dancing On The Charles and, and every Wednesday they host Midweek Techno, the area’s longest running techno night.

Soul Clap’s training goes beyond history lessons to mastering all the elements of the DJ and producer: knowledge, mixing, programming, performance and experience. They honed their knowledge by teaching a university course about dance music at Tufts University. Soul Clap themselves learned that “house wears many hats” and were instilled with the sounds of New York, Chicago, Detroit and Philadelphia while fostering an addiction to crate-digging, that has become a worldwide quest to acquire the best music.

Soul Clap released their first 12″ records on Airdrop Records and then spread their wings with a grip of edits, remixes and originals on Brooklyn’s Wolf + Lamb. With more material coming soon on Crosstown Rebels, Culprit, Glass Table, Suol, Magic Bag & Double Standard (Gadi Mizrahi’s new vinyl only label) and a busy touring schedule already in the books, the boys aren’t slowing down in 2010.

Always pushing new boundaries, always traveling through time and space, decades of experience has prepared Soul Clap to free your mind, and your ass will follow.