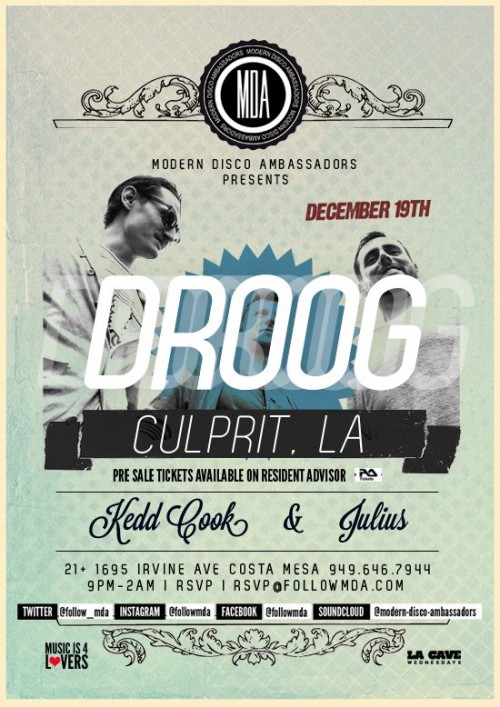 [Party]  The guys over at MDA(Modern Disco Ambassadors) have been bringing some serious talent to Southern California, giving Orange County exactly what it deserves with a close and intimate venue that gives you a warm and buzzing feeling.  Wednesdays at La Cave have now been made a  must go out night as the talent these guys are bringing in is superb.  With past guests such as Lee Foss, Maxxi Soundsystem, Simon Baker, Matt Tolfrey, Tim Green, and a whole load of other artists, they bring back the treacherous threesome that is the collective known as Droog.  Whether it be playing clubs such as the famous Fabric, throwing incredible parties all over the globe, running the popular Culprit, or just being another admirer in music scene, these classy gents always bring it full force and expect nothing short of a phenomenal night of smooth beats.  Much respect to MDA for bringing in thes names and for resident Kedd Cook who has been holding it down for some time now.  Don’t forget next week they will be having Wildkats in the spot as well as Music is 4 Lovers very own SAND who will be starting out the night just right, so that is another show you are not going to want to miss!!!