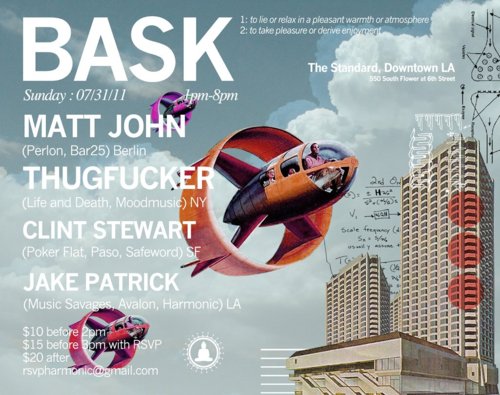 [Party] On Sunday, July 31st,  Harmonic Productions hosts BASK at the Standard Hotel in Downtown, Los Angeles. Special guest lineup for this event will include Matt John, Thugfucker, Clint Stewart & Jake Patrick. I keep saying this, but its true: The Standard Rooftop parties are incredible. Don’t miss yet another one. This is one of the few places in Southern California that does rooftops right. [Press release is below with guestlist info]

Around the time Summer hits its peak,  has fixed another tasty daytime installment of the BASK series at The Standard rooftop Downtown. This time around BASK will feature two headliners, each from either side of the Atlantic. A warm welcome is in order for Berlin veteran MATT JOHN, of Perlon, Bar 25, and Circoloco fame. A king of extended after hour sets (like the 30 hour set at Bar 25 on his 30th birthday!), Matt is focused on taking the audience on a journey through soundscapes of minimal, house, and techno. His style was been described by Groove magazine as “New School Hyperkinetic”, with no definition as to what it meant! Why New School? His sound is rather classical, based on an old form of techno, also with attributes of minimal and Detroit. A musical expert like this will undoubtedly deliver a “Holographic” closing set on the rooftop!

Sharing the headlining duties is New York based duo THUGFUCKER (Greg Oreck, and Holmar Filipsson). A former international aid worker teams up with Icelandic security specialist and former top model to create an international DJ super group. Certainly not what you’d expect from a group called Thugfucker, although the duo has been making their markson festivals all over the world in 2011. Simply put, they play music that turns you on, freaks you out, moves your ass or whatever else makes you feel good…just as long as you’re having fun. Greg is half responsible for running the label Life and Death (which is currently on fire!!). Holmar and Greg bring the party to the party. And the after party. And the after-after party. This LA debut will freak the party right.

New Poker Flat up-and-comer CLINT STEWART of San Francisco, and Avalon resident and Harmonic’s own JAKE PATRICK will open what should prove to be a memorable day of musical fun in the sun. For discounted admission ($10 b4 2pm, $15 b4 3), rsvpharmonic@gmail.com. Bring your fancy footwork. (via Harmonic Productions)