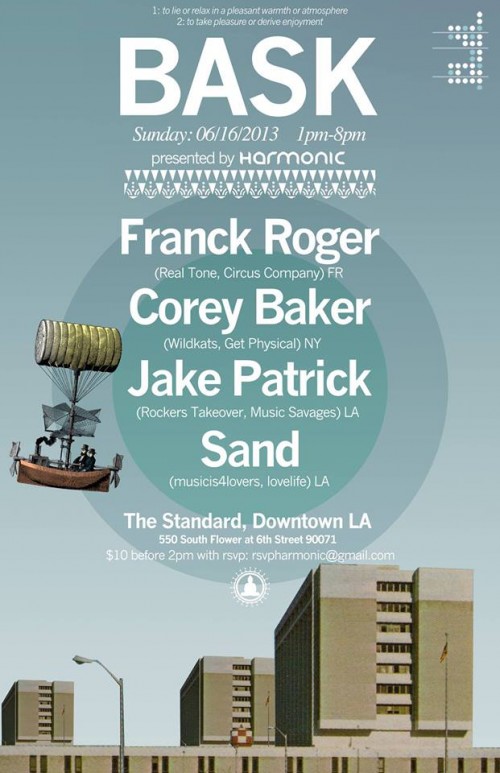 As this year’s beautiful Los Angeles spring comes to an end, Harmonic is set to pay a proper bon voyage with another juicy lineup at BASK on Sunday, June 16th. This time around at The Standard rooftop, the musical maestros will be Real Tone Records boss (the label that saw Maya Jane Coles her big break) and a core producer in the Parisian deep house scene since the mid-nineties – FRANCK ROGER, as well as COREY BAKER of Wildkats, JAKE PATRICK of Rockers Takeover, Delinquent Frequency and Music Savages, and purveyor of muiscis4lovers and Lovelife SAND. This season’s events at the rooftop have been the most jumping they have been in years, and for those who’ve been attending BASK these past few months can attest that the crowd is money and the sound system has been slightly boosted and tuned, providing a more desirable listening environment.

Getting right into introductions for the uninformed, Monsieur Franck Roger has been deejaying since he was thirteen, has developed into a vinylophile and crate-digger (don’t expect him to be using a CPU!) and began producing far over a decade ago with support from the likes of Little Louie Vega, DJ Spinna, Osunlade, Kerri Chandler, Dennis Ferrer, Mr V and so many more iconic deejays and producers. Since the get-go, he has designated spreading the awareness of House music and culture as the most important thing in his life. In his illustrious career, he has played at major clubs and festivals at every inhabited continent in the world. His 168 credits on Discogs.com include releases on Sonar Kollektiv, Innervisions, Desolat, Tsuba, Circus Company, and his own Real Tone and remixes on Crosstown Rebels, Murmur, Leftroom, Compost Black Label, Defected, Ministry of Sound, just to name a few. The past two years has seen his momentum take him from the underground into popular markets, and this monsieur will school y’all with some house root vibes!

Next, for those who aren’t acquainted, Corey Baker is a Producer/DJ hailing from the Seattle area who relocated and cut his teeth in the New York club scene at an early age before making the move to London in 2006. London is where Corey made a name for himself helping to establish the trio “Wildkats” who have seen major success internationally with their productions on labels like Hot Creations, Get Physical, Hot Waves, Off Recordings and MANY more. As a solo producer Corey has had releases on Louie Fresco’s Mexa Records, Electronique and a collaboration on French powerhouse label Black Strobe Records with Hot Creations artist Richy Ahmed. Corey has had the opportunity to travel and play at some of the world’s most elite festivals and clubs. Fabric, Sonar, Fusion Festival, Space Ibiza, BPM Festival, WMC, Burning are a select few worth mentioning. Corey is now at another crossroads as he has again relocated back to New York to continue his musical journey back in the states. Keep a look out for new collaborations and a string of original productions on some great labels that will definitely grab your attention.

Jake Patrick and Sand aka Michael Joseph are two key keepers of the flame in the Southern California music scene, and will certainly get the party moving early. Discount admission with RSVP before 2pm. RSVP required for entry, and early arrival is strongly advised. Enter the clan of BASKers, and see what all the hubbub is about. 1pm-8pm.

Cost: $10 before 2pm with RSVP $20 After
RSVP is Mandatory: https://docs.google.com/forms/d/15_cC0vmvinDPbgM4sSDTZu3Ad2ZZnQz7BcLZV2AZ7Hg/viewform