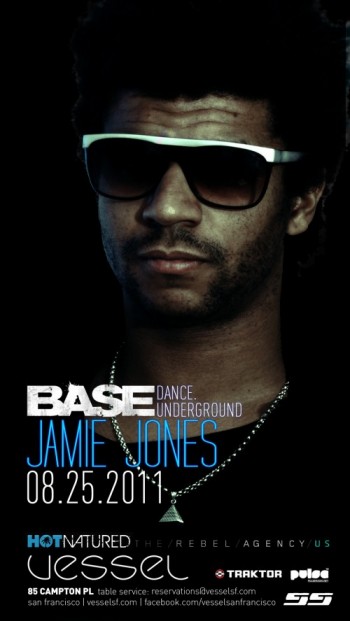 [Party] 8.25.11 – Vessel San Francisco and BASE – hosted by our friends at Sound Selections – proudly present:

From Fabric to Ibiza…

One of techno’s rising stars, Jamie Jones is part of a new guard of house and techno djs who resonate as artists, party people, djs, and live acts.

Island summers helped him become an integral cog in thriving music scenes in Ibiza and later East London, where Jones’s bustling djscandance warehouse parties and regular gigs at Fabric helped him make his mark in London during his winters. During the summer, gigs and residencies like the Space Terrace, Manumission’s Music Box Room, and later DC10 helped him gain a foothold in the Ibiza Scene while defining a sound that was uniquely, electronic, soulful, and bouncy, with a consistent groove.

BASE is Vessel’s weekly House Music event that continues to pave the way for cutting edge music. Driven by pure passion for the music, Base features the world’s most sought after DJ’s as well as exciting underground producers. The Mission: To bring people together and create an outlet for the House and Techno genres and culture.See More