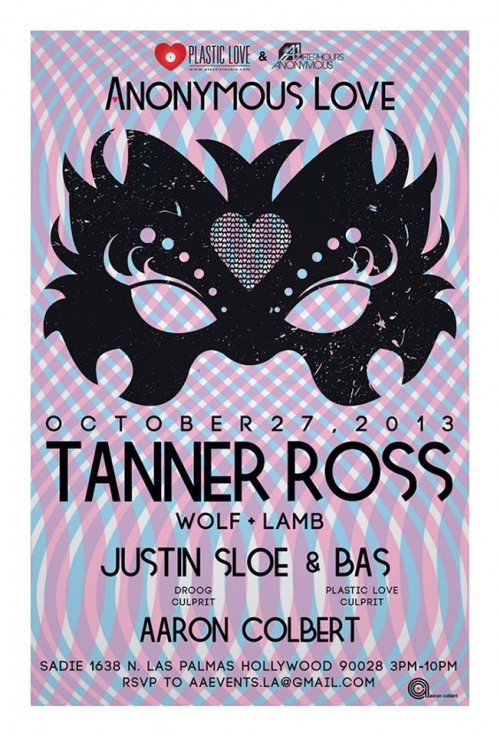 PLASTIC LOVE & AFTERHOURS ANONYMOUS (ANONYMOUS LOVE) announced the next installment of their Sunday afternoon house affair, to be held Sunday October 27th at the outdoor venue SADIE (formerly Les Deux) in the beating heart of Hollywood.  Doors open at 2 pm. Limited presales are $10 with remaining advance tickets at $20, available now on www.residentadvisor.net.

Special guest TANNER ROSS (Wolf + Lamb) will be making an LA appearance courtesy of ANONYMOUS LOVE to keep you dancing all afternoon and into the evening with a perfect blend of house sounds.  LA’s own Justin Sloe (Droog/Culprit) and Bas Elgharib (Plastic Love/Culprit) will round out the event.

Part time engineer, big wave surfer, deep sea diver, Street Fighter champion and member of the Wolf + Lamb family. Tanner Ross grew up in NJ and now lives on Mars. On the weekends, Ross returns to earth to perform magic tricks and then turns back into a space pumpkin on Monday.

The one constant throughout the life of Tanner Ross is music, since being raised in New Jersey in a family environment heavily influenced by music new and old, to his current status as a passionate and driven DJ and producer. In high school he found himself in numerous bands playing everything from funk to punk but it was after progressing to study synthesizers and production at Boston’s renowned Berklee College of Music that things fell into place. Captivated by underground electronic music, his own productions were soon being released on labels such as Wolf +Lamb, Double Standard, Freerange, !K7 and Soul Clap Records.

2013 will see Ross release a collaborative album with Slow Hands as well as other material on !K7, Double Standard and Soul Clap Records. When Ross is not in the studio he will be on tour with Crew Love gigging through Europe for the summer and beyond during the fall.

ANONYMOUS LOVE will continue the party in the coming weeks with some of house music’s finest talents confirmed including Catz N Dogz at Medusa Lounge on Wednesday, November 27th. The initial ANONYMOUS LOVE parties will be taking place on Sundays, but there are plans afoot and dates in the diary at various venues across the city.  It may begin to get darker earlier over the next few months but there is definitely plenty of light being created by the ANONYMOUS LOVE that’s in the air.

This new brand is bringing fresh options to the Los Angeles tradition of ending the weekend on a high as it brings in huge international guest DJs and producers from the worlds of house, disco & techno.  Seasoned UK promoter Paul Cunningham joins LA veterans Bas Elgharib and Jimmy Maheras (Plastic Love/Culprit) and Denver-based AFTERHOURS ANONYMOUS to bring in a raft of established and innovative acts to further enhance the thriving LA electronic scene, while also promoting the huge amount of local talent this beautiful city has to offer.

On Sunday afternoons SADIE KITCHEN & LOUNGE’s beautiful outdoor patio area will be the scene for some epic disco dancing.  The venue boasts a retractable roof and heaters for when the light fades to ensure the foot tapping continues way beyond the low winter sun. Food from their light bites menu will be also be available for those who require a dance floor nibble.